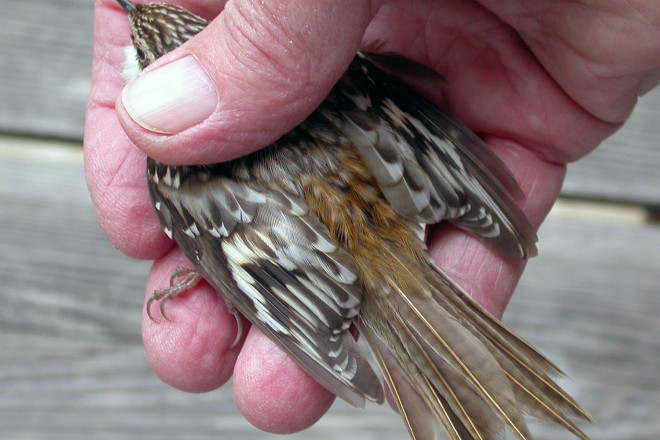 The show is on and we revel, being earthbound creatures, watching the parade of birds moving northward. Every day is an “Earth Day” for us birdwatchers.

Our fickle spring keeps us guessing how much more cold weather and snow we will receive. Northward migrating birds need emerging insects to help nurture them on their journey. However, icy cold mornings and repeated snowfalls will retard most insects from showing up this spring.

A tiny, seemingly fragile bird often will spend the entire winter in Door County. That is the golden-crowned kinglet. They spend much of the cold season finding insect larvae in the evergreen forests stretching through most of the eastern side of the peninsula.

Another small hardy bird that can also be seen during the winter is the brown creeper. Both species do migrate and return in late March to mid-April. They feed on insect larvae or eggs hidden in the bark of trees or in branches.

Literature says that occasionally the creepers will be attracted to suet feeders. We have observed them eating the Marvel Meal that we put out for the woodpeckers, nuthatches and chickadees. They are so adept at clinging to vertical surfaces.

How thorough and fastidious this 5½-inch long bird is. It reminds me of a dedicated little dentist spiraling up the tree trunk constantly searching the crevices with its scimitar-shaped beak, probing for food that, as far as the tree is concerned, shouldn’t be there, perhaps a tiny cocoon or insect egg. 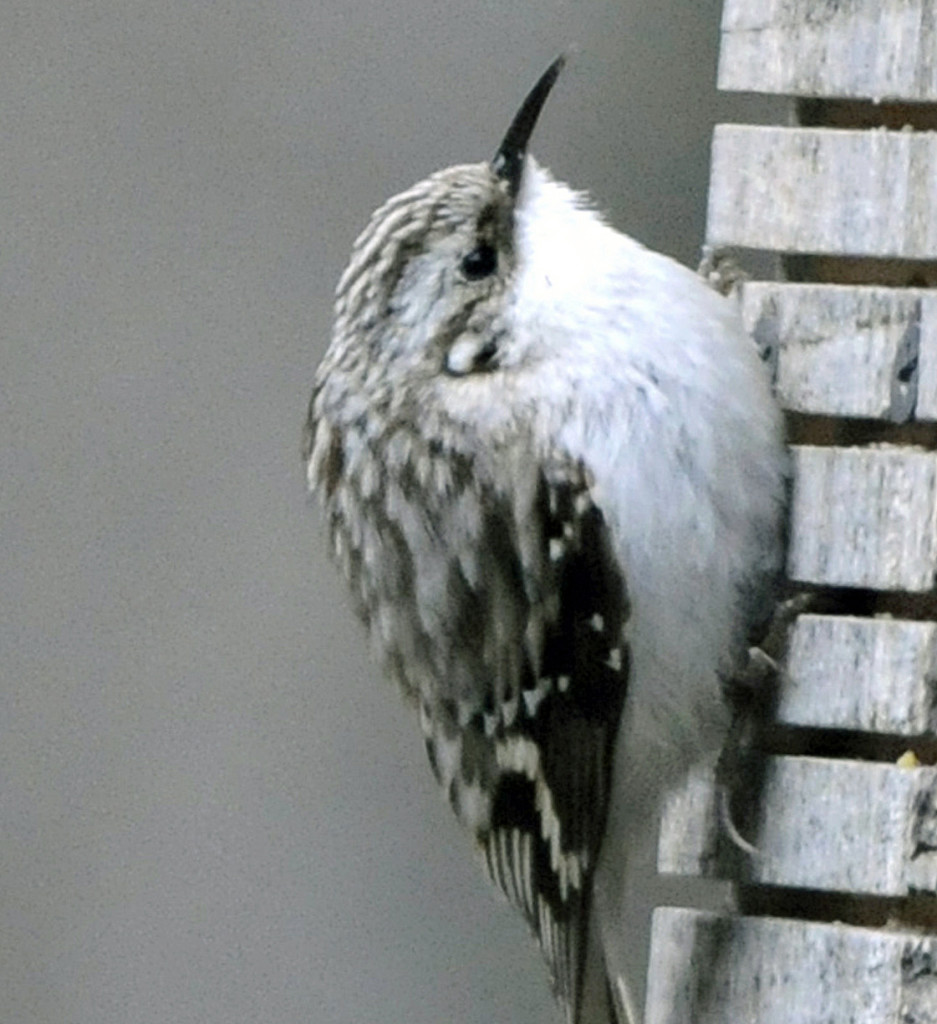 Here is the typical position of the brown creeper as it perches on the Lukes’ suet feeder. Photo by Roy Lukes.

I can imagine the tree saying to the creeper, “Golly, I’m glad you’ve arrived. Move about two feet up my trunk from where you’re standing, a little left, now an inch to the right. You got it! That gnawing insect has been bugging me all spring, giving me a terrible itch. Ohhh that feels heavenly now. Thanks a lot!”

Several writers in past years have really degraded this fascinating little creature, describing it as being undistinguished, characterless, uninteresting and insignificant. We have found this agile investigator of tree trunks to be just the opposite. The more we study its behavior, the more we are impressed.

Smaller than the average sparrow it is dark brown streaked with grayish-white on the back and quite white on the breast. It has rusty-brown feathers covering its rear and very pointed tail feathers. It has a whitish eyebrow line and when it flicks its wings you can see the tawny rump.

I shall never forget the first brown creeper I caught while banding birds many years ago. It was one of the most gentle birds I’ve ever handled. The things that impressed me the greatest were its long toes and claws and its beautiful tail. The delicate shades of browns and tans but especially the sharp points of the 12 tail feathers proved to be very intricate.

The tail is quite proportionately long for such a small bird and its stiffness, much like that of a woodpecker, helps it to serve as a prop, giving the creeper a solid three-point stance as it meticulously combs the bark of trees. Its slender down-curved bill is the perfect tool for reaching under raised portions of the bark and into tiny crevices.

Study indicates that most of the insects consumed by this persistent bird are indeed injurious to trees. Insects, their cocoons and eggs, spiders, bugs, scales and plant lice are included in its largely insectivorous diet. One could call them devoted surgeons of the forest, preoccupied with the scrupulous scanning of tree trunks.

Watch one of these nimble sprites at work and invariably they will land near the base of a tree and methodically spiral upward in their quest for food. They’ll climb just so high and then fly down to the base of a nearby tree and repeat the procedure. Occasionally one will fly to the wooden Marvel Meal feeder and eat tiny bits of the peanut butter-lard mixture.

This secretive nester has been confirmed in about 52 of Wisconsin’s 72 counties, according to the Atlas of Breeding Birds of Wisconsin. Work is now in its second year of the five-year project to produce an updated second edition of our state’s breeding birds. They were confirmed breeders in four different quads of northern Door County during work on the first Atlas from 1995 to 2000.

Red-breasted and white-breasted nuthatches are year-round residents of our state and are also seen inspecting trees. However they are more frequently seen traveling downward on the trunks. Some people call them the “upside-down birds.” The brown creeper rarely, if ever, will hunt in an upside-down position.

This uncommon Wisconsin summer resident but rather common winter resident during some years has really become one of our favorites. Perhaps that is due in part to the fact that we’ve had such close looks at this little beauty for the past several weeks. Nevertheless we consider this usually solitary little worker as being very distinguished, highly interesting, loaded with character and extremely significant to the trees. Here is a bird that continues to creep into our hearts!