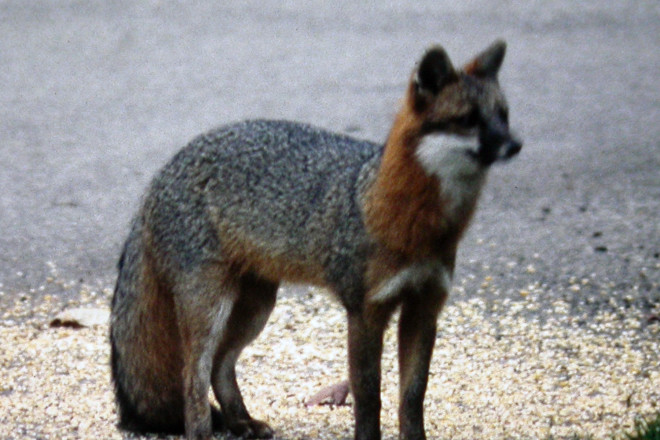 An alert gray fox pauses on the Lukes’ driveway while feasting on cracked corn. Photo by Roy Lukes.

The first gray fox that I ever saw was being lured at night 53 years ago by meat scraps to the lighted front yard of Murl and Mildred Deusing along the Baileys Harbor shore. The small floodlights appeared to have little to no effect on the creatures. A red fox, skunk, raccoon and gray fox, in that order, competed for the food. The gray fox’s extreme shyness made it the lowest on the “totem pole.” All the gray fox got were the crumbs.

We marveled at the gray fox’s thick, lush, salt-and-pepper-colored coat delicately washed with a soft rust color. Its short, pointed nose was white below, as was its upper throat. A thin black line extending back from its eyes divided the reddish-brown neck from the whitish throat. A distinct black dorsal mane extended from the back of its neck to the tip of its tail. The underparts of its body were buffy and its legs and feet were reddish.

Several years later I built a makeshift photographic blind near some other friend’s feeders where gray foxes dined every winter night. Shrewd intelligence radiated from Mr. (or Mrs.) Gray as he stood silently about 25 feet from where I sat, my teeth chattering from the cold, and scrutinized everything within sight that didn’t look quite right. How it would stretch its head up, down and sideways. I got the distinct feeling that he was trying to fake this mysterious hulk, my blind, out of position.

Finally satisfied that all was safe, he inched down the snowbank. The instant my camera clicked and the three synchronized flashes went off I thought the handsome animal would jump out of its fur as it scrambled for cover. Now my wait began. Three pictures in two hours proved my Bohemian stubbornness.

Many years ago Charlotte and I were invited to some friend’s home nestled against a wooded bluff, to see their gray foxes conditioned to eat food scraps within several feet of a picture window. What improved photographing conditions those were over my cold, cramped outdoor blind! Fortunately too, their nighttime visitors were not especially timid. The camera flash would only temporarily scare them off a short distance, and soon they would return for more food.

Gray foxes undoubtedly inhabit every county in Wisconsin wherever the habitat is favorable, such as swamps and woodlands containing good cover and thickets. There are indications that they are becoming slightly more abundant in the north and northeastern parts of the state than in previous years. Southwestern Wisconsin abounding in hilly woods and streams has the highest population. By far the greatest number of these secretive foxes in the U.S. is in the South.

For years people have called this nimble animal the tree or woods fox. They are skilled tree climbers and frequently do so to escape predators and hunters’ dogs or to capture prey.

A study done in the early 1930s in Wisconsin proved that their favorite foods were cottontails and mice. Grasshoppers were prized in summer, as were various wild fruits. Wood rats, ground squirrels, wild birds and even turtles (and their eggs) were also taken.

Very few game birds fell victim to these strong, muscular foxes. Carefully planned studies showed that remains of game animals at foxes’ dens could invariably be traced to their having been killed by automobiles. They were road-kills and not fox-kills. It has also been decided that the few chickens they kill belong only to lazy farmers. (Every beginning writer and typist for many years has learned that, “The quick brown fox jumps over the lazy dog!” Yes, that sentence does include all letters of the English alphabet.)

It is generally conceded that the bolder red fox, with its white-tipped tail, black ears, legs and feet, inhabits the primarily more open and dangerous (less protective cover) farmland. These effective predators are being increasingly seen in cities.

The gray fox, slightly smaller than the red fox, has a shorter muzzle and legs. Its body can range from 21 to 29 inches long, tail from 11 to 16 inches and its shoulder height is about 15 inches. The fox can weigh anywhere from 7 to 13 pounds. The gray fox is in a different genus (Urocyon) than the red fox (Vulpes).

I dare say that the fox hunters and trappers are hard on the farms and orchards in the sense that the farmers and orchardists are losing undoubtedly the finest year-round mousers, the foxes, on their fields and in their groves. Fewer foxes mean more mice, simple as that. I do know that the mouse population, including white-footed mice (or deer mice) and meadow voles can fluctuate and be quite high some years.

It has been estimated that 90 percent of the mature female gray foxes bear young in their first breeding season. Litters average slightly more than four. The young are born from mid-April into early May and often remain with their parents well into fall or even winter. It is thought that, of all wild, furred mammals, theirs is the closest family life and that the young receive the most extensive training from adults of any animal in the wild. They are chiefly nocturnal and frequently rest in a hollow log, tree or cave during the day.

My brief encounters with the gray fox, number one mouser of the cedar swamps, have led me to highly respect this splendid and ecologically important member of North American fauna. Long live the quick gray fox!