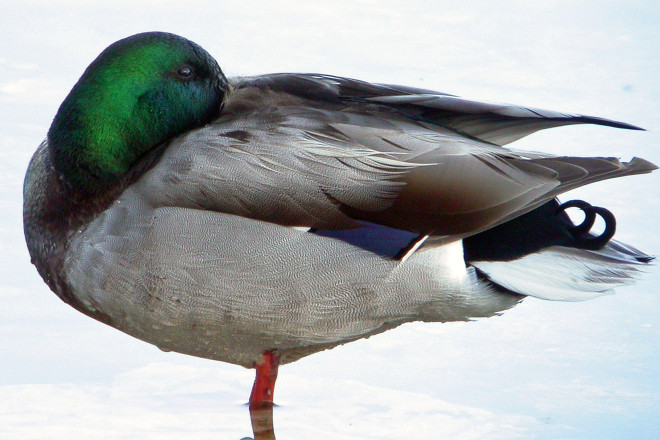 Perhaps it’s the beautiful snowfall continuing throughout the day that got me thinking about the last glacier and its incredible benefits to mankind in the Midwest. Undoubtedly the glacial till, eventually resulting in some of the best farming country in the world, can be listed as the number-one benefit.

Ask the average person to name the most common duck on this continent and the likely answer will be mallard, and they’ll be correct. The flocks wintering in many harbors and marinas in the county must number well into the hundreds. Again, the last continental glacier left in its wake what has often been described by duck hunters as “America’s Duck Factory,” the sloughs and potholes especially in the Dakotas and the prairie provinces of Canada.

The mallard can appropriately be labeled the world citizen of ducks. You’ll find them in North America, Iceland, Europe, Asia and North Africa and most likely elsewhere as well. They breed in much of the earth’s North Temperate Zone. This most adaptable of ducks will breed in the smallest of puddles with only a few shrubs or tall grasses required for concealing its nest. Marshes, sloughs, ponds, creeks, lakes of all sizes in treeless or wooded country all appeal to this hardy creature. It is the ancestor of quite a few varieties of domestic ducks such as the widespread Pekin duck, bred from the mallard in China. 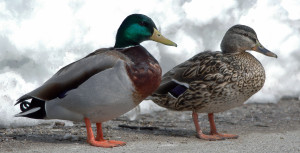 A wintering pair of mallards waits for snow to melt and spring to arrive.

Perhaps one reason for its great success is it can survive on such a wide variety of foods. Many aquatic plants, including sedges, wild celery, smartweeds, pond weeds, duckweeds and wild rice are among its favorites. Seeds of many plants, acorns, beechnuts, grain and corn are included in its plant preferences.

While most of its food is vegetable in nature, it does also consume various types of animals such as small fish, tadpoles, snails, leeches, angleworms, frogs, mice and toads. A great favorite in summer are the larvae of mosquitos. It is claimed that mallards are far better mosquito controllers than many fish species.

Mallards are statewide breeders in Wisconsin and are present in all seasons. Yes, most do migrate, but given enough suitable food in winter, these ducks soon prove their unusual hardiness. They do appear to require some open water, however.

An average drake mallard is about 26 inches from the tip of its beak to the sporty curled tip of its tail. The wingspan is 36 inches. Its iridescent green head, narrow white collar and ruddy breast present a handsome picture. A good field mark on a mallard is the violet-blue wing patch, called a speculum, that is edged both in the front and behind by a white border.

Black ducks have the violet wing patch, too, but theirs lacks the borders of white. This is so obvious that, with a little practice, you can even see the white-bordered wing patch while the bird is in flight.

The hen’s brown and tawny plumage is mottled and streaked throughout. The speculum in each of her wings is the same as on the male. She does lack the curled-up tail feathers of the drake.

Mallards experience two molts a year. They will undergo a complete molt, losing all feathers in late summer to early fall, fortunately not all at the same time. A partial molt occurs in early- to mid-summer when only body feathers, not wing feathers, are dropped. This plumage, called an eclipse plumage, is kept for about a month. During this time the drakes look like the hens. The female’s appearance remains the same year round.

Few wild birds have taken on such an interesting assortment of names throughout their huge range. One of my favorites, for example, is the Irish Mallard, a name common in Louisiana. I’ve often heard them called “greenheads” in this part of the state.

One of the most memorable sights in my birding life happened many years ago when Charlotte and I were driving along the Mississippi River south of La Crosse, Wis., in early November. From one of the high bluff-top parks at a grand overview we were able to scope the river. To our amazement we saw flocks of thousands of mallards. Needless to say there were plenty of hunters on the scene near the river’s edge. It has been said that it takes a truly skilled duck hunter to outwit a wild old mallard.

I love to see mallards “jump” straight into the air from the water. What a powerful explosive take-off they have. Often in past years when I was hiking the Ridges trails next to flooded swales in early spring I’d surprise pairs of mallards obviously searching for nesting sites. I was amazed to learn the loud quacking came from the hen and not the drake. She has the commanding voice while his is quite soft and nasal, not much more than a weak reedy quack. (My wife is laughing!)

The bulk of the mallards’ numbers will have reached northern Wisconsin in their spring migration by late March or early April. The decline during the 1970s, when their population in the state was estimated at 125,000 birds, brought their numbers down to around 50,000 to 60,000 by the mid 1990s.

I’m happy to be living in a state where the breeding and feeding conditions for the handsome swift mallard are so good. Long live the greenheads!