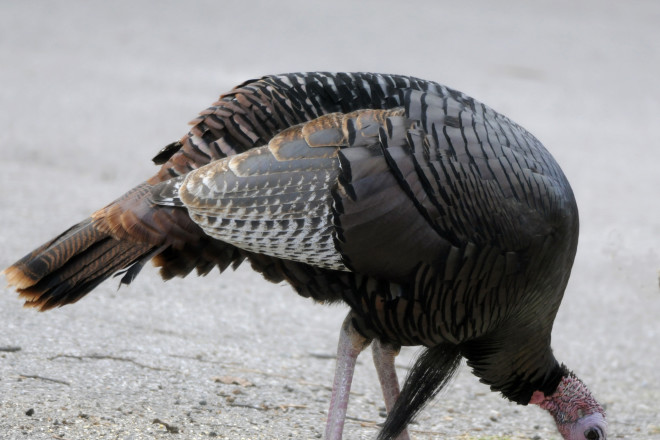 A Tom turkey, with its long beard, enjoys cracked corn scattered on a driveway. Photo by Roy Lukes.

One of my excellent junior high student poetry writers of about 60 years ago, as a part of her Thanksgiving poem, wrote: “Pity the beast, the poor, poor beast, the turkey upon whom we feast.” Such might be the words and thoughts of those opposed to or uneasy about eating meat (especially that of a turkey), or celebrating Thanksgiving, the second-most loved holiday in the United Sates.

Surely many American Indians, along with the Pilgrims, relied upon wild turkeys for food and didn’t have much difficulty in procuring them. 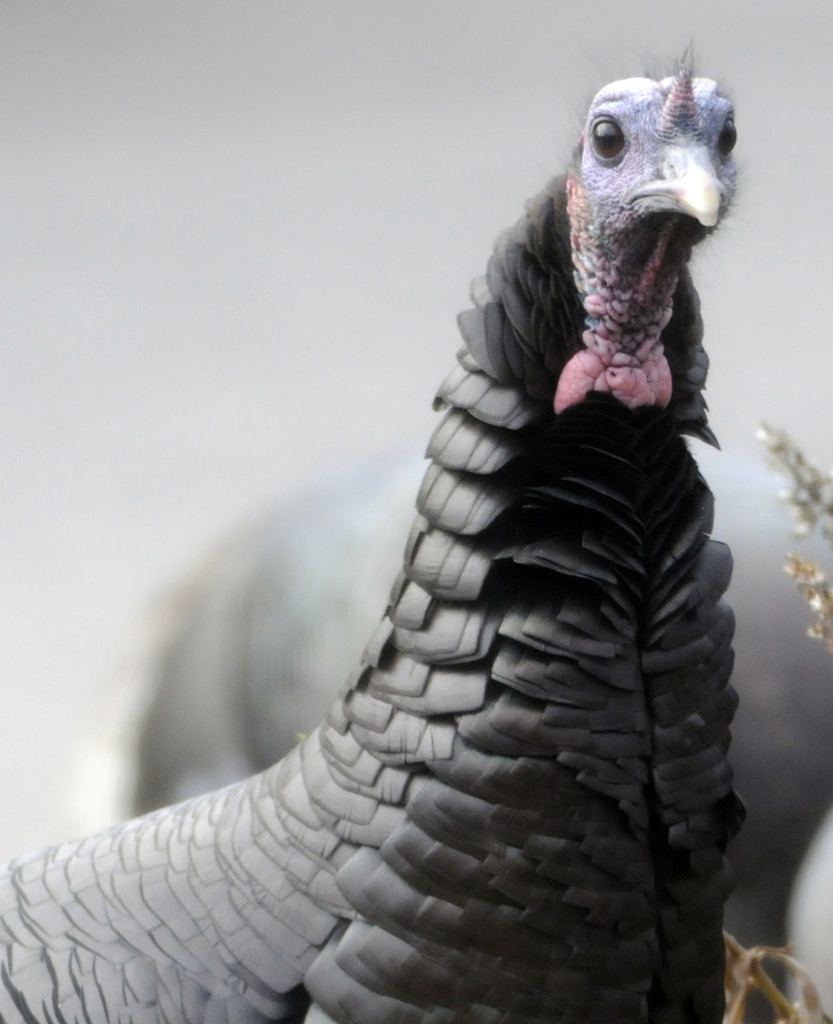 This close view of a turkey’s head shows the pink wattle, sometimes called dewlap, on its throat. Photo by Roy Lukes.

It is estimated that about 10 million of these wily birds existed in our country during the mid-1850s. Over-hunting and destruction of these birds’ habitats brought this number, nationwide, to a surprising low of about 300,000 by 1950. Wisconsin’s wild turkeys disappeared from the state by 1881.

Wildlife biologists with the Missouri Conservation Dept. did much of the research with wild turkeys and developed successful methods of increasing the numbers of these large game birds. Those birds raised on game farms and released into the wild did not survive, leading the scientists to develop a way of obtaining wild turkeys and using them in their reintroduction program.

Large nets shot by small cannons came to be the preferred method of capturing the birds that had been lured to bait.

Apparently, the first turkeys that the Wisconsin DNR obtained from Pennsylvania and introduced into the state were game farm-raised and did very poorly. The next turkeys, 335 of them, were wild birds from Missouri that were released in the rural community of Romance in Vernon County in 1976. These birds did exceptionally well and, from the newly developed flocks, more turkeys were released into various other Wisconsin sites.

What an amazing success story this program has been! Today, the estimated number of wild turkeys in our state stands at about 320,000, more wild turkeys than in the entire country just 65 or so years ago. The U.S. population of these very popular game birds stands at 7 million today. Turkey hunting has become a $1 billion-a-year industry that is enjoyed by 2.6 million hunters.

The first completed five-year Wisconsin Breeding Bird Atlas project indicated that wild turkeys successfully breed in all but about nine counties in the state today. Contributing to the northward-moving range of these birds have been mild winters in recent years, available habitat, habitat improvement, the introduction of wild turkeys and good reproduction.

Wild turkeys, that were absent from Wisconsin as recently as the early 1970s, are now so abundant that the spring hunt harvests are among the biggest in the nation.

The sale of turkey stamps purchased by hunters funds much of the work being done in our state to increase the turkey population and further the hunting of them.

The record spring harvest in Wisconsin in 2003 of 42,237 turkeys (up from the previous spring harvest of 39,336) consists of more turkeys than existed in the entire country (30,000) a hundred years ago.

The very best turkey habitat is where crop fields, old fallow fields and hardwoods are interspersed. Every time Charlotte and I have driven into Baileys Harbor during the past several years, the road has taken us right through the middle of such an area. It was not uncommon for us to count more than 40 of the birds at a time, about half of them feasting on kernels of corn on the ground within 50 feet of the road. The other half of the flock busied itself picking weed seeds in the field across the road to the north. Several of those we studied were “Toms,” who sport beards that were at least eight inches long.

The greatest concentration of these large birds, some weighing nearly 25 pounds, that we’ve ever experienced, occurred on our Christmas Bird Count in southern Door County in December of 1999. One flock of more than 200 birds was seen feasting on corn adjacent to a large tract of woods.

Come spring, I wonder what those woods looked like! I’ve seen where a large flock of these exceedingly strong-footed creatures makes it look like a battery of powerful roto-tillers has gone through the area. Imagine the damage they can do to native plants species, and the number of invasive weed seeds, such as Garlic Mustard, they can spread and perfectly plant by their scratching.

I have a few nagging questions: Can wild turkeys survive well on small parcels of land? And, has the success of the turkeys been at the expense of other native species, especially in regions that were considered beyond the wild turkeys’ historical range?

Today, thanks to successful reintroduction, they are hunted in every state with the exceptions of Alaska and Hawaii.

One of our professional biologist friends claims that turkeys, in their vigorous scratching for acorns, insects, tubers, etc., are also devouring great quantities of various salamanders, Wood Frogs and Spring Peepers that spend the winter just inches beneath the fallen leaf cover in many woods.

Yes, we’ll join the American crowd this year, enjoying the great biodiversity of Thanksgiving, by devouring our share of (tame) turkey, cranberries, sweet potatoes and pumpkin pie. In our prayers we’ll hope that the wild turkey population levels out in such a way that other native species of plants and animals will also continue to successfully survive.