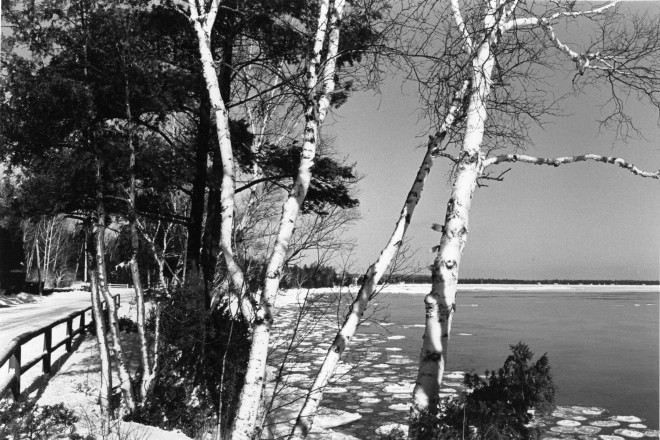 With the professional football season winding down, I think back to the NFL championship game in Green Bay on December 31, 1967 between the Packers and the Dallas Cowboys, the game often referred to as the Ice Bowl.

Before the playoffs had led to that game, I had made plans with Tom Erdman to trap and band Snowy Owls on that day out on the cold, windswept coastal marshes north of Green Bay. I drove into Green Bay before daybreak in my four-wheel-drive truck. I hadn’t realized how slippery the city streets had become. I began to turn into a filling station to get gas, but instead made about six complete circles down the middle of University Avenue. Fortunately there wasn’t another car in sight, and I had the glassy road all to myself, so I survived without an accident.

We trapped and banded a grand total of zero owls that day…but at least the Packers won the big game. My brothers and dad thought I was “out of my mind” to chase after Snowy Owls rather than watch the exciting game.

This warmer than usual El Nino winter, now hitting us with below normal temperatures, makes us want to hibernate. I couldn’t help but recall other past experiences with winter, ice and snow.

I fondly remember my boyhood days and exploring the weird “moonscape” ice formations along the Lake Michigan shore south of Kewaunee. How my mother worried about us and always warned us to be careful. Gosh, if she only knew how we inched our way to the very top of the 10- to 12-foot-high volcano-like ice formations, to peer over the edge to see if there was open water down there; and there always was.

It was during those years, around 1936, that Dad took my three brothers and me in his 1930 Plymouth sedan onto the frozen Kewaunee River, about a mile down from the Hwy. 42 bridge in downtown Kewaunee, to watch Joe Selner’s crew cutting and harvesting ice. Their huge ice storage building was situated east of the large Kewaunee Manufacturing Co. plant along the south shore of the river. Selner’s supplied a good many homes, including ours, with ice for refrigerating food.

On the hottest days of summer, when the iceman delivered ice to our house, we pestered him for the large chips with which to cool ourselves. I must confess that in those days the city of Kewaunee released all its raw sewage into the river not very far from where the ice had been cut the previous winter – but oh how wonderful those smooth cold chips of ice felt in our mouths, and what great relief they brought to our hot games of softball.

A thrilling winter nighttime sight I recall from boyhood occurred on the way home from a basketball game at the high school. A freezing rain had fallen during the game, thoroughly coating the trees with shimmering ice. Approaching each street intersection, we were thrilled by the fantastic circular patterns we saw when looking at the hanging incandescent streetlights through the branches of the trees. Naturally only certain surfaces at the precise angles reflected the light to our eyes, giving the feeling that the tree’s branches and twigs were arranged in neat concentric arcs. That experience immediately entered my memory list of “unforgettables.”

One of my favorite shapes in nature to photograph is the letter “C” as it appears in many instances, especially landscapes. In fact, the largest C-landscape pattern I have enjoyed is the bay at Baileys Harbor. Within it, in only a few winters during the past 50, have the water currents, the direction of the wind and precisely the right amount of floating slushy ice combined to produce what I call “ice doughnuts.”

What a great thrill and Christmas present it was 33 years ago to receive a package of five reproductions of old four-by-five inch lantern slides of snow crystals made by the famous W.A. “Snowflake” Bentley between 1895 and 1930. Charlotte and I were then living in the Rangelight Residence at Baileys Harbor and had gone to Madison in January to see an outstanding bird art collection, as well as to view the Bentley lantern slides.

Unfortunately, we watched one brilliant snowflake after another accumulate as we drove back to Door County, until we were caught in the middle of the worst blizzard imaginable, with a wind chill factor down around 85 below zero! The storm hit us en route to our home, and we were determined, regardless of the extremely poor visibility, to complete the trip.

Finally, after landing in a ditch south of Jacksonport and miraculously being pulled out by a nearby resident, we inched our way home and made it into our driveway.

Once there, we recalled the delicate fragile beauty of one snow crystal, multiplied suddenly into billions during the raging storm, leading to impassable roads and huge snow drifts. We were so glad to be back home inside a good shelter until the storm passed.

With this gentle reminder we hope you recall, with pleasure, some of your past winter experiences, storms, snow and ice, and that you enjoy the beauties of the remainder of our winter in total safety.