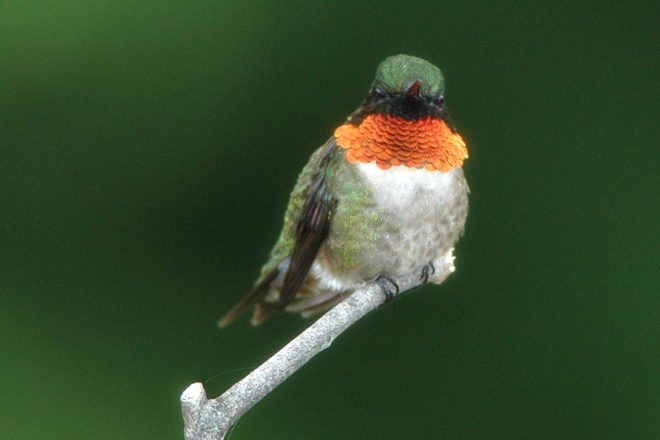 The male hummingbird’s throat patch is red only when seen in the sunlight. Photo by Roy Lukes.

How can anyone not be excited about a native songbird that weighs only one-tenth of an ounce, is about three and three-quarters inches long, and can eat up to half its own body weight in sugar each day? Obviously the bird I refer to is that tiny, needle-billed dynamo, the ruby-throated hummingbird.

Many people who feed birds put sugar water in special feeders for their resident ruby throats, which usually return to Door County by early May. The male arrives first to stake out his territory and often fiercely defends the feeder.

Last year I had only two males and one female until the young were hatched. Sometimes the males briefly tolerated each other, but not when the female arrived. It seemed that after she made an appearance, one male would still dominate the sugar water and not even allow the female in for a drink.

Surprisingly, hummingbirds comprise about 320 species – one of the largest bird families – all of which are in the Western Hemisphere. Twelve species breed in the continental United States, but most are found in South America. The ruby throat is the only regular nester east of the Mississippi River.

This incredible little bird’s dazzling, iridescent colors, when seen in the sunlight, range from ruby red to violet, green, blue, bronze, gold and yellow. The male’s gorget (colorful throat patch) contains no red pigment but instead reflects its ruby red to our eyes via sunlight. When seen in the shade, the throat patch is black.

Added to the bird’s awesome appearance are its fascinating behavior and benefits to people, such as pollinating flowers and eating myriad tiny insects. Little wonder hummingbirds are so popular with people.

I’ve read about various ways to prepare the sugar solution for hummingbirds, but never use honey – use only regular, white cane sugar. The recommended ratio is one part sugar to four parts water.

The method I use is to bring four cups of water to a boil, then stir in one cup of sugar until it is completely dissolved and returned to a boil. (Don’t make the serious mistake of boiling the solution too long, thus making it too sweet. The thought is that this can lead to liver damage in the birds.) Then I take it off the heat and allow it to cool a bit before storing it in a covered jar in the refrigerator.

I use two feeders so that when one is empty, I can fill the other and thoroughly clean the depleted feeder. That helps to prevent mold from growing inside them.

Once the hummingbirds have been conditioned to your feeders, you can shift the ratio to perhaps five cups of water to one cup of sugar. This will ensure safer food and may encourage them to feed more from flowers and other natural sources.

Planting brightly colored, tubular flowers – especially red, orange and yellow ones, along with columbine, bee balm, butterfly milkweed and penstemon – will both attract the hummingbirds and provide them with food. When they visit flowers, they not only obtain nectar but often find small insects as well.

These speedy fliers perform an impressive courtship display: The male flies in front of a perched female and does deep semicircles as if following the curve of a large trough. We’ve seen them do this just off our deck, and if it didn’t impress the female, it certainly did impress us!

The birds’ exquisitely built nest is made of bud scales, plant down and spider silk and is decorated on the outside with bits of lichen. A lichen-expert friend said that every nest he has examined had the same lichen – Parmelia sulcata – on it. The female does all the nest-building, lays only two eggs and raises the young alone while the male might mate with another female.

A few years ago, a friend told us that he was using his garden hose to water his flower beds when he saw a male ruby throat fly into the spray of water. Our friend changed the hose setting to a fine mist and enjoyed seeing the hummingbird repeatedly fly through it as if taking a morning shower.

Many are convinced that the petite, one-tenth-of-an-ounce ruby-throated hummingbird is the most precious, fascinating bird in the eastern U.S., and if you’re very lucky, one may take a shower in the hose spray while you’re watering your garden!