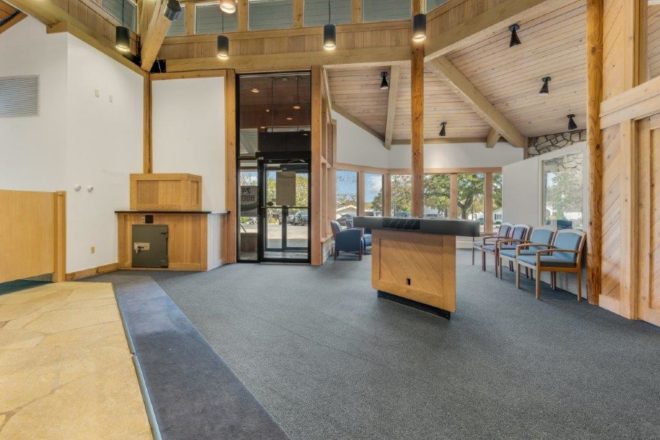 The interior of the former Nicolet Bank building.

A former bank building isn’t a fit for just any business, but for Tracy Alpert, it made perfect sense.

Alpert, the second-generation owner of Rummele’s Jewelry of Green Bay and Fish Creek, was attracted to one particular feature of the building: the vault.

“I bought the building because of the good walk-in vault,” she said. “I can carry more inventory and store it more securely. Bank buildings are prime property for jewelry stores. Rummele’s in Green Bay is in the former Brown County Savings and Loan building.”

Alpert said securing inventory is the biggest concern she has. It’s not just the jewelry she offers for sale, but the heirlooms that come in for repairs.

“My jewelry I can replace, but my biggest concern is the safety of my customers’ jewelry,” she said. “You can’t replace sentimental value.”

Alpert’s father, the late Charles Alpert, opened Rummele’s in Green Bay in 1950, and she joined him in the business in 1990. Her daughter, Chloe, has now joined the business as well. Eight years ago, she expanded with a Fish Creek location that was part of the Whistling Swan shops.

“Some of my best customers I’ve developed from that location – people from Texas, Missouri, California,” she said. “In Green Bay, we’re more of a destination spot, where people get buzzed in the door. In Fish Creek, we develop a lot of out-of-state clients. It’s more laid back and fun.”

This winter, Alpert is gutting the teller desks and cubicles, installing new flooring, and doing some cosmetic work, but she said the building is largely in good shape. She hopes to be up and running in May.

“I’m very excited, and the location is going to be great,” she said. “Being on the hill at the entrance to Fish Creek, everyone will have to pass it.”