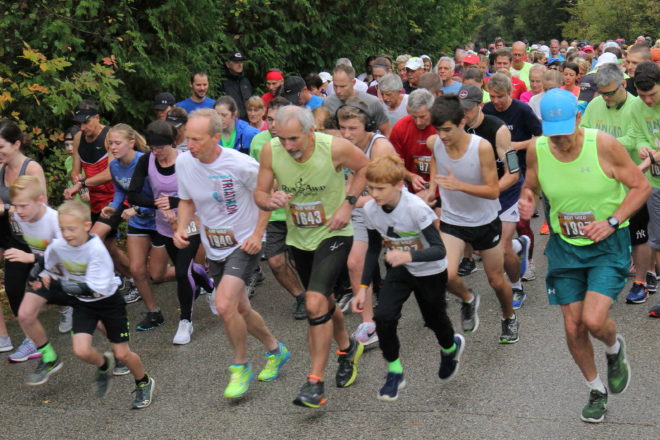 The run on the mostly closed roads of the park has become a tradition for many residents and visitors, drawing competitive runners, first-timers and everyone in between.

“If you’re competitive it is chip-timed, but it’s also very family friendly,” said Heidi Bader of the Friends of Peninsula State Park. “So if you’re a new runner it’s not intimidating.”

One competitive runner is Bob Richards, an eight-time finisher who splits his time between Villa Park, Illinois, and Sturgeon Bay.

“That time of the year, it’s just fun to run in the fall,” Richards said. “And Potawatomi Park is a hidden gem in Door County. With the fall leaves it’s just a great run.”

Richards is a former editor of Chicago Athlete Magazine, a top Masters division runner, and a race organizer. He said organizers Pat Saladin and Carol Mulinex do a tremendous job creating a great small event.

“It’s extremely well organized in an absolutely beautiful setting,” he said. “A lot of people come up from the Green Bay and Appleton area, and I think they’re surprised at how beautiful that park is.”

The course is no joke. It takes runners up a significant climb that rivals the climb to Sven’s Bluff in Peninsula State Park, at the top of which is the soon-to-be dismantled Potawatomi Tower.

In addition to the 5k and 10k runs, the race also features a 1/3-mile Smokey Bear Run for kids age 2 – 10. All kids finishers get a medal, and all participants get free park entry, a race shirt and the chance to win age group awards.

Proceeds go to the Friends of Potawatomi State Park, which supports the dwindling state parks budget, helping with trail maintenance, cleaning, playground equipment, benches and other needs at the park.