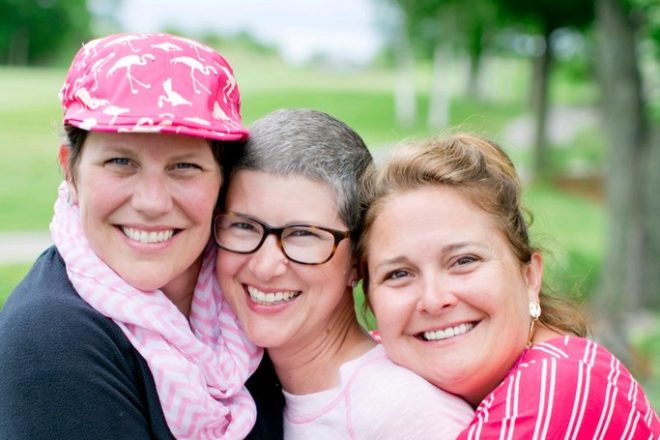 Carrie Baldwin (right) embraces breast-cancer survivors Tina Torcivia (center) and Tonia Van Boxtel (left), both of whom will be Running for a Cause this spring. Photo by Kim Thiel Photography.

Baldwin takes on 13.1-mile challenge for the Sue Baldwin Foundation

Carrie Baldwin has never run a 5K, but in May 2020, she has committed to completing the Door County Half Marathon, which means running a total of 13.1 miles.

“I am not a runner,” Baldwin said, but she has a compelling reason to take on the hilly course in Peninsula State Park on May 2.

Baldwin will participate in the Run for a Cause program, a charitable sign-up option through which runners receive free registration when they raise at least $250 for charity.

For Baldwin, it’s personal. In addition to operating Door County Event Planners, she’s the president of the Sue Baldwin Fund (SBF), a charitable organization she founded in 2007 to commemorate her mother’s 10-year anniversary of beating breast cancer. SBF’s goal is to assist Door County women and men who have financial need in their fight against breast cancer through awareness, screening, treatment and care.

Baldwin is running to raise funds for SBF, and she is encouraging others to join her. According to her friends, she can be quite persuasive and is no stranger to charitable giving. Along with SBF’s board members, Baldwin organizes an annual golf outing – The Pink Classic – which is a large source of fundraising for SBF. Over 10 years and through $200,000 in funds raised, SBF has been able to help nearly 40 women in the community so far.

“This past year was our biggest year yet [in terms of applicants requesting assistance], and I wanted to find a way to raise more money for the foundation, but without having to add another event to plan from the ground up,” Baldwin said.

The Run for a Cause program became that solution, and Deb Davis, a fund director, took the initiative to get a team of runners started.

Each year, 100 Run for a Cause registration spots are available to runners, and so far, Baldwin has filled more than 30 of those with runners who, like Baldwin, have committed to running and fundraising for the benefit of SBF.

“I’m so passionate about this because I know the money stays here in the county,” Baldwin said. All of the money goes directly to the fund, meaning there isn’t any portion taken out for event organization or fees.

Baldwin’s passion for the cause has already inspired her: She is on a training schedule now, starting slowly to work up to that longer distance by the spring without risking injury. But she’s not the only one who’s making the leap from nonrunner to half marathoner.

“I’d say at least half of our team [members] so far haven’t run a half marathon before. There’s a wide range of abilities,” Baldwin said. “Most of the team is good friends and acquaintances I’ve told about the race, and there are also a lot of families with young children involved, which I think is important.”

Baldwin, a mother of two young daughters, thinks it’s extremely valuable to model charitable giving and actions for her children and for other families’ children.

“My daughters said they wanted to run it, too, so they’ll be running the last .1 miles across the finish line with me!”

To join Baldwin in Running for a Cause, visit  doorcountyhalfmarathon.com/charity. Or, donate to the Sue Baldwin Fund directly at suebaldwinfund.com.