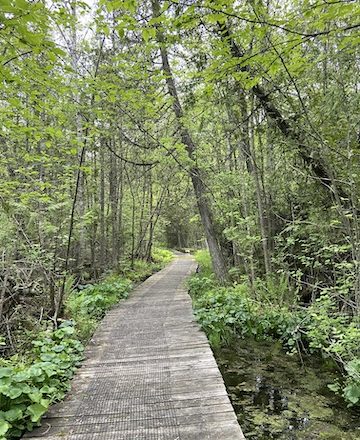 Running on the boardwalk after a rain may be dangerous, but on a dry day, it acts as the perfect runway surface. One warning, though: Watch for frogs underfoot! Photo by Maddy Schierl.

Just off Logerquist Road, across from an old barn sporting the words “Logerquist Bros.” in large lettering, an unassuming wooden sign stands at the entrance to the Rushes Nature Preserve. At the top, it reads:

In Wildness is the preservation of the world.

Often, during morning runs along Logerquist Road, I’ve passed this sign without a second glance – focused more on moving forward and not keeling over than on reading an old wooden sign. Last week, however, I stepped off the beaten path to check it out – and I’m so glad I did.

The Rushes Nature Preserve was once owned by the same Logerquist brothers of nearby-barn fame. They had long envisioned a wilderness preserve on their property, and, when they sold the land to Clem Heeden in 1980, the terms of the agreement included preserving a wilderness area.

Now owned and managed by the Rushes Wilderness Foundation, the land has been preserved ever since. Although this preserve may not have the name recognition of nearby Cave Point or Whitefish Dunes State Park, it embodies the best of the peninsula’s Quiet Side all the same.

Three trails – the longest only 1.9 miles long – wind through meadows, meander across marshes and briefly hug Kangaroo Lake before making their way back toward Logerquist Road. The preserve is quiet and green, with level, gravel trails that are perfect for a relaxed run.

From the entrance, the Red Trail gently descends from a dolomite rock formation. As it proceeds into the woods, it continues to gently descend into a marshy area. The layers of leafy branches arch like cathedral ceilings overhead, shading the trail below. After a rainfall, the lower portions of the trail flood slightly, but it’s nothing you can’t splash through if you’re determined. As the ground gets wetter, the boardwalk portion of the Red Trail begins. I’d advise against running on the boardwalk after a rain, but on a dry day, it acts as the perfect runway surface. One warning, though: Watch for frogs underfoot!