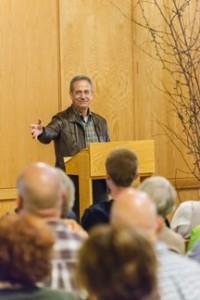 Politicians don’t always lead. Sometimes they follow, and the message they get from their constituents, the news media and their parties tells them which way to go.

Russ Feingold, former Wisconsin representative to the U.S. Senate, said it’s time to change the message:  “We do not honor pure obstruction,” Feingold said. “We want you to work together.”

Feingold is currently Lawrence University’s Stephen Edward Scarff Distinguished Visiting Professor. On Sept. 30 he addressed a group of Lawrence University students and Boynton Society members at Björklunden about partisanship in modern politics. He discussed the history of the Senate and how the practice of filibustering – or purposefully extending debate to delay voting on an issue – has changed.

The practice was almost never used 100 years ago, and since Feingold joined the U.S. Senate in 1993 it has become routine and destructive.

“It’s essentially brought the institution to a standstill, and I don’t believe for a minute that was the intention of the Founding Fathers,” he said.

Feingold described the practice that has become commonplace. The minority party pledges to stop the ruling party from passing legislation, so when the ruling party introduces legislation it immediately files cloture, or a two-thirds vote to end debate, instead of risking a filibuster.

That leads to a lack of discussion and compromise.

“It has to be understood that [filibustering] is to be done on occasion and it should not be proof of your loyalty to your party,” Feingold said.

Congressional lore says Thomas Jefferson described the Senate as a saucer used to cool a hot cup of tea, Feingold said. The Senate wasn’t supposed to participate in frenzied partisan argument but, rather, take time to have meaningful discussion about legislation.

“One thing is clear – [the Founding Fathers] feared faction,” Feingold said. “They feared parties. They did not want parties or partisanship to control government.”

Even the first uses of filibuster and cloture were about issues, Feingold said, not partisanship. Cloture was first used by President Woodrow Wilson to end debate about entering World War I, and southern states infamously filibustered the Civil Rights Act of 1964 for 57 days, according to the U.S. Senate Filibuster and Cloture page.

“It had nothing to do with Democrats versus Republicans trying to shut down the American government,” Feingold said. “It had to do with something that was the right of a senator, something that you do when you felt passionately about a moral issue or an issue of your state.”

When he first ran for state Senate Feingold found that the best way to engage voters was to not say the words “Republican” or “Democrat.” He said Wisconsinites used to value bipartisanship and politicians who worked across party lines.

But now, he doesn’t think that’s the message we send. He said working across party lines automatically portrays a candidate as a moderate, which isn’t necessarily true.