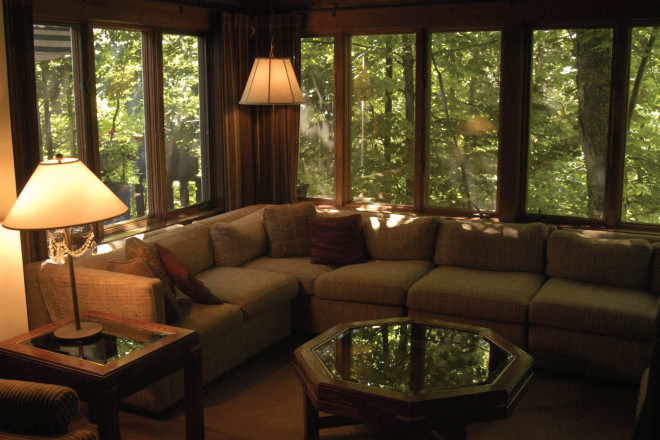 “I drove to school everyday past the log house near Juddville,” Miriam Erickson said, “and one day I noticed a for sale sign. I told Howard, ‘Oh, let’s go look at it!’ just out of curiosity.”

The year was 1966, and Miriam Erickson was teaching home economics at Gibraltar High School. She and her husband were planning to buy a motel. “The real estate agent opened the shutters and let us in,” she recalled, “and immediately I fell in love with it!” 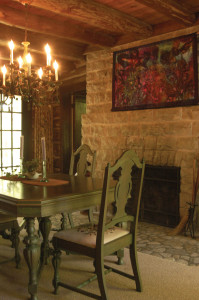 The house was situated on 17 acres of land west of Highway 42, enough space to build a motel, and the great room of the house seemed ideal for a reception area. Unfortunately, financing did not work out for the motel, but the Ericksons decided that they would purchase the property for their home.

Subsequently, they built the Shallows Resort on the shoreline of Green Bay not far from Egg Harbor; Miriam and her late husband Howard Erickson have now passed the lodge to their daughter and son-in-law Lizabeth and Bob Dickson.

The Hermitage, named in honor of the home of Howard Erickson’s famous ancestor Andrew Jackson, sits back from the highway atop a low hill. As the landscaping has become naturalized and threaded with paths, the structure blends into its surroundings. Now passersby may not notice the rustic grandeur of the building, which boasts a huge great room (comfortably seating 50 people), large family room, formal dining room, breakfast room, office, and three bedrooms. The house has three working fireplaces and three sets of French doors overlooking gardens and woods.

The history of the house dates from the Roaring Twenties. Elizabeth Merrill Bass, an early suffragette and political activist from Chicago, purchased the property in 1923; she was a court reporter working in the courtroom of Judge George Bass, whom she married. The home was designed by architect William Bernhard (who also planned the Ephraim Village Hall and two other private homes in Northern Door). The Hermitage was constructed of logs salvaged from two barns east of Juddville and assembled over a three-year period by local builders John Brude, Thor Hansen, and Olaf Olson.

A cherry orchard of 4,000 trees was planted and because of the wild roses used in the landscaping, the Ericksons speculate that Jens Jensen may have been consulted as a designer, as he favored the use of those shrubs.

A brief history of the home compiled by Linda Smith found that Clarence Darrow was a visitor, and that Mrs. Bass corresponded with Presidents Woodrow Wilson and Franklin Roosevelt and their wives. Copies of notes, letters, and newspaper clippings document these relationships as well as Elizabeth Bass’s political activities.

Conversations between the Basses must have been interesting, because she was a Democrat and he was a Republican. After he passed away she lost the home in the Great Depression. Elizabeth Bass died impoverished in a nursing home.

In 1938 The Hermitage was purchased by Frieda and Edward Collins. He, as a brief biography by Erik Eriksson relates, was a Chicago pianist and composer. The great room, which housed two grand pianos at the time, was not only his rehearsal/composition space, but his recital hall for private concerts.

The great room has a stone fireplace at one end, French doors at the other, and windows along both sides. Above the fireplace is a balcony with steps hewed from split logs; musical groups have performed from the balcony, Erickson said, and the previous owner, Mrs. Bass, gave political speeches from it to an audience assembled below.

A stone cottage, designed by Frieda Collins as a studio for her husband, sits at the edge of the land on Highway 42.

Next the property passed to the Orchestral Association in Chicago in 1962; that organization sold it to the Ericksons in 1966, who used it as a home during the winter months and rented both the Hermitage and the Collins cottage during the tourist season while they operated the Shallows Resort and lived at that site.

Howard and Miriam Erickson continued the tradition of opening The Hermitage for public purposes. They have hosted two House and Garden Walks, a Holiday Home Tour, and gatherings for Gibraltar School. In addition they have given receptions for the marriages of four of their daughters; and countless parties, sometimes with bands in the balcony, sometimes for their daughters’ friends when they were teenagers, and often Christmas celebrations for their extended family and friends.

“It was a wonderful place to raise a family,” Erickson said, “a home to our five children. We have been fortunate to be able to live in this part of the country, a beautiful place. It’s hard to imagine not being here!”

Erickson has five daughters:  Jeanne Barnard is a kindergarten teacher in Sturgeon Bay; Lizabeth Dickson is a special needs teacher with that district; Michele Packett is director of an assisted living unit in Appleton; My Chi Erickson is a fashion designer in New York City; and Soledad Erickson is a teacher in Chicago. And she has eight grandchildren and one great-grandchild.

Miriam Erickson changed her career focus at Gibraltar from home economics to library science and became known throughout the state for her instructional media center as she was one of the pioneers in bringing computer technology into public schools. 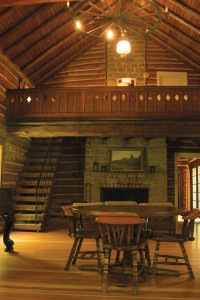 And like the first woman who made The Hermitage her home, Erickson is a political activist. Now retired from teaching, she serves on the Gibraltar School Board, the Birch Creek Board, the Library Foundation Board, the Nicolet Library System Board, the CESA 7 Board of Control, and the Wisconsin Council on Library and Network Development Board (of which she is current president). She has been honored both as Wisconsin School Librarian of the Year and Door County Philanthropist of the Year.

Of all her volunteer work, she values that involving education as most important. “We must project into the future,” she maintains. “I am proud of Gibraltar, one of the finest small rural schools in Wisconsin.” She is proud, too, of the support that the school receives from the community.

And she is proud of The Hermitage. She has the same warm feelings for the home as she did when she and Howard first walked into it in 1966. “Buying the house,” she said, “was one of the best things we did in our life.”