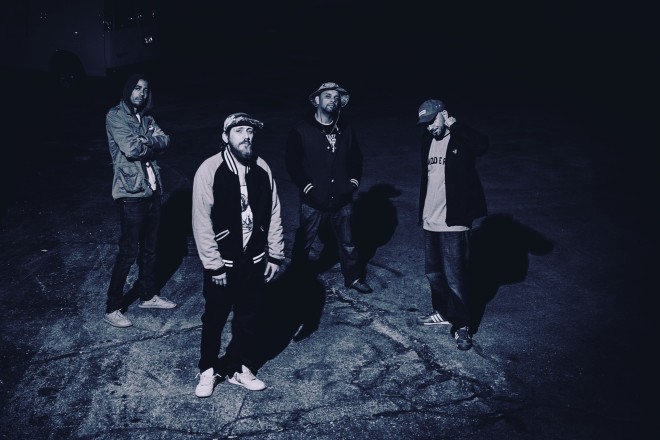 The Thanksgiving holiday is an annual staple of overindulgence and instead of hopping on a treadmill to burn all the caloric excess, the Brick Lot in Sturgeon Bay has provided a more entertaining outlet in which to bring your body back into pre-Thanksgiving form.

“Expect a party, that’s what we’re all about,” laughs Isa Ortiz, a founding member of the hip-hop group, the Rusty Ps.

Ortiz, whose rap moniker is Count Classic, formed the band on the east side of Milwaukee with original members Phantom Channel, MC Oneself, and Dana Copafeel. The four friends, inundated with the culture of hip-hop throughout their high school years, began a musical trek in the mid-90’s that helped to pave the way for hip-hop in Milwaukee as it stands today.

“We have 20 years under our belt,” Ortiz said. “We decided we were into hip-hop culture which is a little bit different than just rapping. It really promoted the art of not just rapping but using words to communicate thoughts and expressions. We didn’t see that here in Milwaukee.”

In a city where segregation is still a pervasive problem, the commonality of mutual music appreciation was a bonding agent among the members of the Rusty Ps and people from various parts of the city. Freestyle rap sessions and collaboration with individuals rich in creativity helped to springboard the two decades-long career and influence of the Rusty Ps.

“All of our friends were really diverse and really mixed,” Ortiz said.

Eventually, many aspiring hip-hop artists and groups felt the need to get out of Milwaukee in order to pursue and establish their own niche in the hip-hop industry.

The beckoning of cities with perhaps a more fertile ground for their genre was something that didn’t entice the Rusty Ps as they felt it necessary to stay and develop their own brand in the city they called home.

“It wasn’t so much of a choice to stay here; it was really much more that we felt obligated to Milwaukee,” Ortiz said. “We were stubborn and committed to the scene we had built.”

This against-the-grain approach is something that allowed the group to evolve and transform the hip-hop scene in Milwaukee. Through popular venues such as The Rave, the Rusty Ps were able to play and connect with all the major rap and hip-hop acts that came through Wisconsin’s biggest metropolitan market.

“(We) got to meet and perform with everybody,” Ortiz said.

It’s not an exaggeration. The Rusty Ps have been able to play with iconic, generation-shaping acts such as Eminem, Common, The Black Eyed Peas, and Run DMC, just to name a few.

Sharing a stage with giants in the industry is “how you network and connect,” Ortiz said.

Milwaukee is still home, but the Rusty Ps have taken their homegrown act nationally and internationally over the past two decades. They’ve recorded and worked with an array of producers and fellow artists from Milwaukee to the music mecca of Los Angeles.

Their contributions to the hip-hop scene in Wisconsin have not gone unappreciated. They have been the recipients of three Wisconsin Area Music Industry awards, one each in 2000, 2001 and 2006. They were voted “Best of” Milwaukee hip-hop/rap group by the readers of the Shepherd Express, an alternative, weekly newspaper in Milwaukee.

The Rusty Ps success has led to a vibrant hip-hop scene in Milwaukee and they are proud of their role in planting the seeds for a more robust and diverse music scene.

“The exposure we were able to receive became a blueprint for everybody else,” Ortiz said. “And as we opened the door, people just ran through it.”

On Nov. 27, the Rusty Ps will bring their 20 years of experience to the Brick Lot and promise a fun time for every participant.

“Expect something creative. We are going to create great music that you can feel regardless if you like the genre or not,” Ortiz said. “You’re going to be able to see these guys that are committed, serious about music, and passionate about what they do. And when you see that, it usually means you’re in for a good time.”

Opening acts for their gig include Sheol Dynasty, Chump Service, Rhythmical Braille, and Bo1katt The Impossible. For more on Rusty P’s, find them on Facebook, Twitter (@RUSTY_Ps1), YouTube, and SoundCloud.