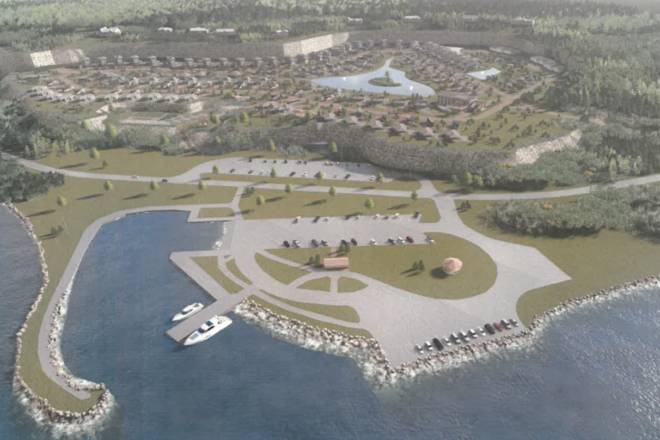 Developers of the Quarry RV Park in Sevastopol are pinning their hopes for the project on the Door County Resource Planning Committee (RPC) coming to a different decision than the Town of Sevastopol did. The Sevastopol Town Board voted unanimously Monday to forward the recommendation of its plan commission to deny a Conditional Use Permit for the 117-unit RV park on 52 acres across from George Pinney County Park.

The RPC will take up the issue in February. It takes the town’s recommendation into account but is not obligated to follow suit.

Mike Parent is working with Tom Goelz and Pete Hurth to develop the property owned by the Dreutzer family. Parent said he didn’t agree with the town’s decision but wasn’t surprised, based on last week’s plan commission decision.

“We’re disappointed, but we’re hopeful we get more of a fair shake at the county level,” Parent said. He said he expects the county to base its decision more strictly on zoning guidelines.

“This property has been zoned recreation or recreation commercial for 43 years,” he said. “It’s zoned for what we want to do, based on conditions.”

Town Chair Dan Woelfel said rather than just a simple recommendation to deny, the town should give the RPC a list of recommended conditions in case it overrules the town. Those suggested conditions include:

In recommending denial, the town noted that the project does not match the vision of its recently adopted comprehensive plan and is not similar to other uses in the area, which are mainly single-family homes.

“My main objection is the density and scale of the development,” said supervisor Linda Wait. “That obviously doesn’t fit into the surrounding area of single-family homes.”

The plan commission had said in its decision that it didn’t consider the application complete because the developers have not yet obtained permits for sanitary, sewer and stormwater management plans. Parent, who has been developing properties on the peninsula for more than 30 years, said it’s common to get a permit based on the condition that the developer obtain necessary permits from state agencies such as the Department of Natural Resources.

Parent said a condition that all permits be in hand prior to construction would be appropriate. He said that any contractor working on the property is obligated to carry insurance that would be more than enough to cover catastrophic accidents. Hurth noted that blasting is required for most buildings on the peninsula and has been done without controversy for decades in Door County.

“Blasting and road construction have been going on in this area for many years,” he said. “Every home along these roads required blasting for basements, blasting for septic tanks.”

Hurth, who lives less than a mile from the proposed site, did not hold back his frustration at the process.

“Everyone who lives there is hypocritical if they’re saying I’ve got mine, you can’t have yours,” Hurth said.

Hurth conceded that it’s a large development, but he asked whether people would rather have 117 units on 50 acres, or 117 single-family homes eat up the entire shoreline from Sturgeon Bay to Ephraim.

“Do you get them all in one spot, or do you eat up the whole county?” he asked. “Do you have 117 more driveways on Bay Shore Drive instead?”

Parent pointed to Wisconsin Act 67, which significantly weakened the strength of town oversight of CUPs. The act made it impossible to deny a conditional use permit based solely on testimony in opposition.

According to the act, as long as those seeking the permit can prove they are going to abide by the restrictions set out in the permit, no amount of neighborly opposition can prevent the county from approving it. The developers emphasized repeatedly that the discussion should focus only on the zoning aspects, but Jim Nellen urged them to give greater consideration to the fears of their neighbors.

“There’s an unwillingness to accept the fact that people are concerned,” Nellen said. “It’s incumbent on you to look at this as a very big development and go as far as you can to put people at ease. For most people, this is their major asset. Why not give them comfort?”

Parent took issue with the fact that Nellen, the plan commission member who has been most vocal in opposing the proposal, is also a member and former vice chair of the Bay Shore Property Owners Association, which has campaigned against the development. Nellen did not disclose that association at the plan commission meeting, and during the town board session, he was not obligated to do so.

Nellen said he sought counsel to ask whether his standing represented a conflict of interest and was advised it did not because the town is not the ultimate decision maker.