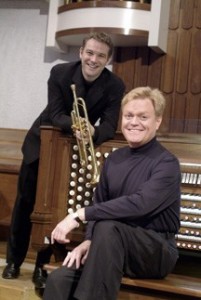 Trumpeter Ryan Anthony and organist/pianist Gary Beard are making their second Door County appearance in concert at Shepherd of the Bay Lutheran Church on June 17 at 7 pm. They prepared a varied program of music, ranging lyrical extravaganzas of the Baroque era to the music of American composers and jazz.

Many fans know Anthony from his work with the legendary Canadian Brass. After receiving wide acclaim for his unique combination of charisma, music and wit, he has become one of America’s most in-demand solo trumpet players.

As Minister of Music/Artist-in-Residence at Lindenwood Christian Church in Memphis, Beard developed a nationally acclaimed music program. He conducts The Lindenwood Chancel Choir and is founder/conductor of The Gary Beard Chorale. Beard is also in demand as an organist. He began his study as a prodigy, and made his professional debut at 11. His teachers have included such notables as Pierre Cochereau at Notre Dame Cathedral, Paris.

A reception will follow the concert and offers the opportunity to meet Anthony and Beard. There is no admission charge; but a free-will offering will be collected for future musical events.

Shepherd of the Bay is located on Highway 42 in Ellison Bay.

For more information call 920.854.2988 or to learn more about Anthony and Beard visit http://www.ryananthony.com and http://www.lindenwoodcc.com.