Cyclists and drivers often share Door County roads, but there are a few days a year when bikes start to outnumber the cars.

Two of those days are coming up, with the Door County Century Bike Ride on Sept. 8 and the Peninsula Century Ride on Sept. 14, when thousands of cyclists will hop on Door County roads to ride the 100-mile routes.

Safety is a big concern for the organizers of such large events.

“Competitive endurance events often have formal road closures, and with those instances the riders, for the most part, can assume they won’t be interacting with motorists out on the road,” said Sean Ryan, co-organizer of the Door County Century Bike Ride. “The challenge with an event like the Door County Century is it takes up 130 miles of roadway and there’s really no practical way to seek road closures and inconvenience the rest of the community. The riders are going to be out on roads that could have motorists on them.” 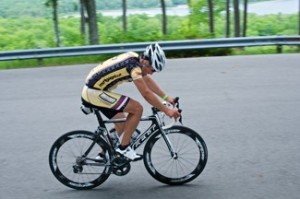 Considering the inevitable rider and driver interaction, Ryan took extra caution when planning the route. He chose scenic roads with little traffic, assigned volunteers to help with tricky intersections and will make sure riders understand the rules of the road.

“When people are in a large group they have a herd mindset, which can sometimes show callous disregard for other people on the road, whether it’s fellow cyclists or motorists,” Ryan said. “For their own safety we really push them on the notion of riding no more than two abreast and going into single file.”

Police officers will be issuing tickets to riders who violate traffic laws during the race.

But the responsibility for safety isn’t left to the cyclists. Ryan hopes drivers notice the Door County Century Bike Ride signs and are alert to riders on the roads. He said drivers should slowly approach riders and wait for riders to merge into a single file line before passing.

“Legally I know under Wisconsin law cyclists have a right to be out there too,” Ryan said. “It’s a matter of both groups politely sharing the road.”

Cycling Safety By the Numbers

Crashes involving cyclists in Wisconsin in 2011.

Cyclists killed from those crashes.

Percent the number of cycling injuries has declined in Wisconsin since 1990.

Percent of the 12 fatal crashes that involved either an impaired cyclist or driver.

Percent of the 1,036 injuries that involved either an impaired cyclist or driver.

• Motorists should give cyclists at least three feet of clearance when passing.

• Cyclists should give parked, stopped or moving vehicles three feet of clearance when passing.

• Look before opening car doors when parked on the roadside.

• When turning right in a car, yield to bicyclists passing on your right.

• Bicyclists should ride on the right side of the road in the same direction as other traffic.

Source: The Wisconsin Department of Transportation