When Door Property Owners brought one of the nation’s leading organic lawn care experts to Door County in 2012 for a presentation, planners thought municipal leaders would jump at the chance to learn from him.

Patrick Fitzgerald, a member of Door Property Owners who has helped lead the group’s pesticide awareness efforts, said they sent invitations to every municipality, but not a single municipal representative attended the presentation by Paul Tukey, who also created an Emmy-nominated documentary about pesticide and chemical use in lawn care.

“My hope would be there would be greater interest in the younger generation, and the fields where young people are playing,” said Fitzgerald, a Jacksonport resident.

Fitzgerald and his fellow members of Safe Lawns Door County are alarmed by the growing evidence that links synthetic pesticides to childhood leukemia and lymphoma, autism and asthma, as well as the risks to groundwater health. A 2015 study by the Harvard T.H. Chan School of Public Health concluded that children exposed to insecticides indoors were 47 percent more likely to have leukemia, and 43 percent more likely to have lymphoma, though the two diseases remain extremely rare overall.

“Everything that we put on our lawns eventually leaches through and ends up in our water system,” Fitzgerald said. “You don’t need to use these chemicals on your lawn. We need to get away from the belief that the perfect lawn is clover- and dandelion-free.” 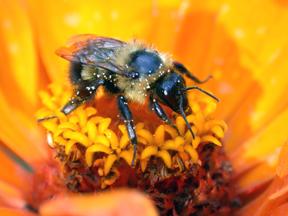 The highly important Bumblebees are among our best pollinators, but pesticides have been linked to a rapid die-off of colonies.

Opponents of synthetic lawn treatments point to a cycle of weed control, pesticide use and fertilization that creates an unhealthy soil and perpetuates never ending synthetic treatment of our green space. That cycle is something that Jay Feldman, who founded the advocacy nonprofit Beyond Pesticides in 1981, has lobbied against for 35 years.

Though a picture-perfect lawn is now synonymous with the homeowner’s American Dream, it wasn’t always the case. The chemicals that are now ubiquitous in agriculture, public parks and homes came to market for the first time after World War II.

“When I was growing up, a lawn always had clover,” Feldman said. “Scotts [chemical company] convinced us that didn’t look right. Some people will point to an ‘Augusta Effect,’ that it wasn’t until color TV came into popularity and they first showed the Masters Golf Tournament and its beautiful course that people clamored for a lawn like that.”

Feldman said there was a time when he thought banning pesticides and changing fertilizer habits would be easier than changing the food system. In the 1980s they were able to pass rules that required lawn care professionals to place signs and flags in the ground when grass was treated with toxic chemicals.

“We didn’t think people would stand for it if you actually had to label it as toxic,” Feldman said. “But they do, people just assume you can’t have a lawn without these things. People will say that pesticides go through rigorous testing, so if it’s on the market there’s no reason to fear it.” 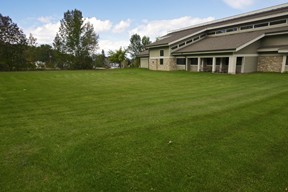 This once green stretch of lawn behind the Sister Bay-Liberty Grove Library is now an educational, sustainable, user-friendly garden. Photo by Len Villano.

That creates personal complacency, Feldman said, and reliance on the government to protect people even in the face of evidence to the contrary. Feldman cites wave after wave of chemicals approved by the EPA, only to later be found to cause cancer, poison children, harm pregnancies, and destroy plants and wildlife.

“The EPA only asks the questions of whether the risks are acceptable,” Feldman said. “When you do that, you have all kinds of gaps and assumptions that may not apply. They test based on what the average person can handle, not what a small child or someone with a sensitive endocrine system can. We don’t test for mixtures, synergistic effects, such as taking prescription drugs and being exposed to phosphates. We don’t evaluate the impact on vulnerable populations.”

Environmental activists have clamored to stop the use of insecticides containing neonicotinoids almost since the moment they hit the market. Neonicotinoids, originally developed by Bayer, target the nervous systems of insects such as aphids. Hailed for their effectiveness, they soon became a leading suspect in the rapid decline in bee colonies across the United States. As evidence mounted that the chemicals were a threat to bee populations, impairing their ability to forage for food and navigate their way to flowers or back to their hives, their producers doubled down in defense of them – until this month.

On April 15 the pest control company Ortho announced it was removing neonicotinoids from its pest control products by 2021.

“While agencies in the United States are still evaluating the overall impact of neonics on pollinator populations, it’s time for Ortho to move on,” Ortho’s general manager Tim Martin said in a statement.

“Why didn’t the EPA catch this?” Feldman asked. “Because they weren’t looking for it.”

Egg Harbor Village Administrator Ryan Heise said the village proudly does not use synthetic pesticides fertilizers on grass at any of the village parks, applying only site-specific fertilizer to flowers, “with little room for runoff.” 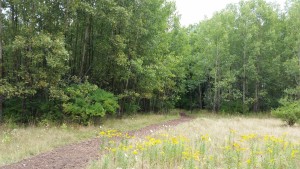 Crossroads at Big Creek has very little managed lawn, but where they do it’s used as a gathering space for tours and schoolchildren. In 2012 the organization’s board of directors adopted a policy prohibiting the use of fertilizers and pesticides on lawn areas and gathering areas, instead maintaining them only using organic practices and products approved by the Organic Materials Review Institute (OMRI).

“There are a whole lot of problems with these chemicals, from autism to cancer,” said Crossroads director Coggin Heeringa.

In rare instances in which human health is risked, such as poison ivy or wild parsnip, non-OMRI pesticides may be used temporarily only with approval from the board of directors.

These small steps give Fitzgerald hope, and he pointed to Montgomery County, Maryland, as an example for Door County to follow.

While no Wisconsin municipality has outright banned use of synthetic chemicals, Montgomery County last year became the first county in the country to issue a countywide ban on cosmetic pesticides on private lawns, citing “a body of scientific evidence linking the widely used products to cancer.”

The ban exempts golf courses, gardens, agricultural land and playing fields. The county did begin a pilot project to manage five athletic fields with organic practices, and charged the parks department with creating a plan to make all playing fields pesticide-free by 2020.

Doug Soldat, turfgrass extension specialist in the Soil Science Department at the University of Wisconsin – Madison, said that simply letting nature take care of your lawn may not be great for the environment.

“One of the most counterintuitive things is that a dense lawn is actually really good for the environment and has been shown time and time again,” he said, noting that he didn’t want to sound like a shill for the fertilizer industry. “A dense lawn helps prevent runoff, as a lawn with a lot of shoots will slow the water down, and releases less phosphorous into sidewalks, ditches and storm drains. A lawn is a buffer for the runoff from your home, driveway, and sidewalks.”

Unlike farmers and golf course superintendents who study soil treatments and create nutrient management plans to get the most from their soil, the average homeowner has very limited knowledge about soil, pesticides and fertilizers.

“You can overdo it with fertilizer, for sure,” Soldat said. Whether applying organic or synthetic fertilizer, he suggests the following basic guidelines for applying fertilizer to your lawn.

Base it on need

Fertilizer is not the solution to every thin lawn. The number one cause of a thin lawn is shade. Before you put down fertilizer, make sure it’s needed. Don’t fertilize based on routine, but on what your lawn needs. The average lawn doesn’t need fertilizer, some older lawns may need just one application. No lawn needs five or six.

Get your timing right

For a thin lawn in full sun, two or three applications of fertilizer per year are enough. Memorial Day and Labor Day are the times to do it. If you must apply a third, do it around the Fourth of July. There’s a natural release of nitrogen in soil in early springtime, so putting down fertilizer early provides excess nitrogen.

Even if you don’t use organic fertilizer, you can still make efficient use of nutrients by mulching your clippings back into your lawn to return nitrogen back to the soil. There’s no reason to throw it into the trash.