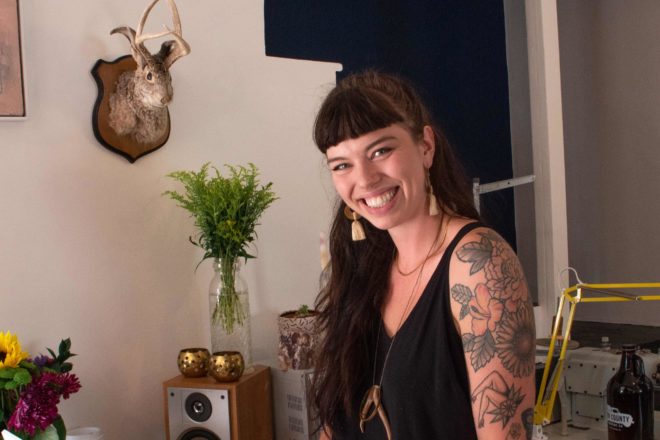 Making and selling cheerleader-style denim skirts to her friends in fifth grade was a precursor to Sage Conrad’s career. She always knew she wanted to have her own business, but she said that the chance to open a shop — and one in Baileys Harbor, no less — happened in a split second.

Late summer 2019 marked the opening of Jackalope Milk, a shop full of handmade accessories and textiles in a renovated garage. The name was inspired by the legend of the jackalope: an extremely shy creature that’s a cross between species of now-extinct pygmy deer and killer rabbits that is, understandably, one of the world’s rarest creatures. It is “tempted with whiskey and cowboy song, and a gentle-handed woman may be allowed to milk the jackalope.” Its milk is the “cure for all ailments and the elixir of life.”

Conrad had been actively selling work under the Jackalope Milk name for three years through her jackalopemilk.com website, but she was mostly doing it for fun and with small projects. She’s also sold items through other small shops, including The Lightbox in Ephraim.

The opportunity to have a physical space presented itself in April 2019 when her family, which owns the Bearded Heart coffee shop in Baileys Harbor, bought the property — a building intended as a new space for the coffee shop with a garage next door. Her family got access to the garage in June, and they all started renovating it in July, splitting the cost of renovations.

Conrad had originally intended to use the garage as a workshop out of which she’d occasionally sell things, but once her equipment and materials were in place — and taking up a lot of the available space — she realized it made more sense to rent the garage from her parents and turn the front half of it into a store. Plus, having the coffee shop next door would be a bonus.

“Once everything got going, I just really couldn’t stop the momentum,” Conrad said.

At one time, she had had plans to move to Milwaukee, but when this opportunity arose, she knew she had to take it. Baileys Harbor is dying for more retail, Conrad said, and in Door County, places such as her space are largely unavailable. She was looking hard for studio spaces to rent but couldn’t find anything because they were either too expensive or in bad shape.

“The only way I’ll be able to survive is by having a way to keep making things,” Conrad said. “I was really discouraged about not having a studio or a venue” — but now she has both.

Brynn Swanson, community coordinator for the Baileys Harbor Community Association, said that when she began her job in 2012, community members were noticing that the town was missing out on hosting visitors in part because there was little shopping. They needed to give people something to do other than walking up and down the street and then leaving, she said.

Along with Jackalope Milk, Baileys Harbor is welcoming four new retailers this year. The town’s message to visitors is that it’s a great place for an experiential vacation, Swanson said, which attracts a younger audience.

“It makes it really nice when we have young, fun, interesting shops for these people to go to while they’re walking around,” Swanson said. “We’re attracting a really eclectic group of businesspeople who are starting to invest in Baileys.”

Conrad’s family bought the property just in time to persuade her to set up Jackalope Milk in Baileys Harbor rather than Milwaukee.

“[The store] has such a strong voice,” Swanson said. “[Conrad] knows exactly what she wants to have for a message. She’s not trying to be everything for everybody, and that’s very refreshing.”

Conrad’s taste in art and fashion developed long before she opened Jackalope Milk. She grew up in New Mexico and Hawaii before moving to Door County in 2009 and finishing high school at Gibraltar.

She had plenty of access to art as a child, and her mother always worked, so Conrad spent a lot of time alone making her own fun — and her own money. By second or third grade, she was recycling old cans and selling lemonade to make extra money, and she made clothes with a sewing machine her grandmother had given her. These entrepreneurial ventures allowed her to save enough money to buy her own sewing machine.

“Sage has been creative for as long as I can remember,” said her mother, Mary Horton. “The first project that she ever did was sewing a little Winnie the Pooh figure. I purchased the little pattern and the materials, and I thought we would do it together. She was maybe six, and when I went to get the stuff out so that we could do it together, she had already done it on her own. She figured out how to cut out the pattern and sew everything together. We still have that at home.”

Conrad took some formal sewing lessons as a kid, but it wasn’t until she went to the University of Wisconsin-Madison that she dug deeper into textile and fashion design and graduated in 2018 with a degree in those fields.

Conrad left college for a while, and by the time she returned, the department had reformatted the program. It had become more integrated, and she spent time taking extra classes in the textile department.

“While I mostly was thinking that I was going to be doing fashion, it just kind of turned out this way,” Conrad said. “I realized that I really liked weaving; I really liked printing and color, and I started to realize that I was really disinterested in the mainstream fashion world.”

After college, Conrad moved to Portland, where she worked for a small bag company and learned a lot about efficiency, sometimes working assembly-style for larger orders.

Now Conrad focuses on rare, handmade items. She creates in a way that reflects her daily life, in which she strives to move through the world with thought and care.

“What I’ve realized is how wasteful the fashion industry is, and it’s become really important to me to have a certain consciousness and intention in the things I’m making and the things I buy for myself — the things that I wear and the car I drive,” Conrad said. “It’s starting to matter a lot more.”

The items at Jackalope Milk reflect what she chooses to have in her home: western-style decor, candles, plants, crystals and incense. She hopes her items will be ones that will last for a very long time and that customers will treasure.

“I’m my own first customer,” Conrad said. “Everything I’m making is something that I want for myself.”

She also sells items at Jackalope Milk that are made by friends. She did a trade with a friend in Milwaukee: Conrad would sell her jewelry, and the friend would sell Conrad’s bags. She said she just tries to find friends who make cool things.

The process of setting up the shop, making original items and purchasing outside merchandise and other artists’ work to sell has been almost compulsive, Conrad said.

“I literally can’t stop,” she said with a laugh. “I’m a complete workaholic. I think of myself as an ant or a dung beetle or something — one of those things that literally keeps moving until they die.”

Conrad works in her shop about 20 hours a week, works another 40 hours a week at Bearded Heart and picks up shifts at Trixie’s and Leroy’s Water Street Coffee. She said she probably works 80 hours a week.

“It’s never been a question that [art is] what she would be doing with her life,” Horton said. “It’s more of a question of how is she going to make it all work with living in Door County and making a living and wearing all the different hats like we all do.”

Conrad is also starting to volunteer at Peninsula School of Art once a week during the winter for community nights, and she recently became a board member of the Baileys Harbor Community Association.

She has a future in mind for her building past its current use. The garage has an upper level, so she hopes to continue renovating it in order to rent it to other creatives in Baileys Harbor who need a studio space.

Until then, Conrad hopes to feature her work at pop-up shops and craft shows, work on her online presence and create a backstock of merchandise during the winter months. With her kind of drive and passion, there’s every chance she’ll succeed.