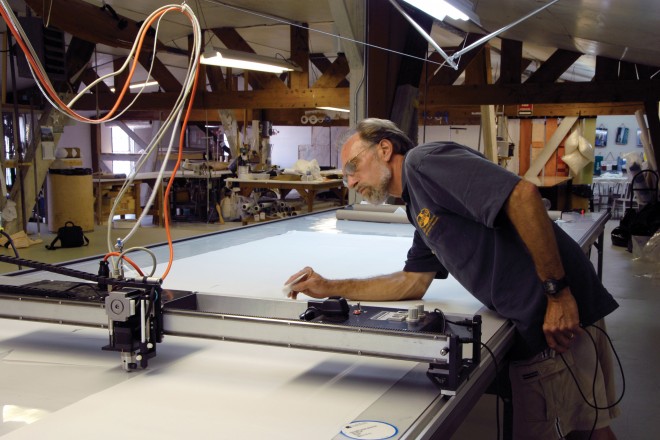 The Dorsal Sail Loft is a place where old world methods meet new world technology. Here, above an old boat yard on the Sturgeon Bay waterfront, Charlie Klein stands above an archaic blueprint of a 40-foot sailboat. His mind is calling upon formulas as he deciphers facts and figures from an age-old era of sail design. Klein is designing yet another racing sail for a competitive customer.

Just out of Klein’s office window stretches the Michigan Street Bridge from a vantage point that makes it look like it may run for miles. Tug boats and the Door County Maritime Museum frame the remaining view. One can’t help but think that a sail maker may find inspiration in this scene of maritime structures, curving and bending like the very canvas he will sew to completion.

Klein first started sewing sails in his Sturgeon Bay loft in 2000; yet, he is no newcomer to his craft. A college apprenticeship at a sail loft in Oshkosh, Wisconsin gave Charlie his start in the business. Since then he has been living and working in the maritime industry. As a designer for Palmer Johnson, he created mega-yacht interiors that transformed these behemoths into floating palaces. The technology is commonly known in the industry as AUTOCAD, an engineering computer aided design software tool. Using this engineering medium, Klein was eventually able to incorporate his experience into the transformation and rehab of the current Dorsal Sail Loft.

The location was fittingly a lofting department for large yachts built at Palmer Johnson. On the walls of this loft are actual drawings or scaled “blueprints” of yachts once constructed by the yard – now plying the oceans of the world. These tidy and meticulous renderings frame out a large floor which is typically covered with sails and sailcloth. Sunken sewing machine stations allow sewers to stitch synthetic fabric together while gathering and moving material on a flat floor, rather than a table.

Far across the room stands a numerically-controlled cutting machine that stretches along a wall. Unlike the sewing stations within the floor, this machine is a table attached to a computer where pieces of material are designed and cut. This high tech sail-making machine uses six pieces of software in various ways. Klein broke down the description of the complex system eloquently and simply. He described one piece of software specifically as a “patch tool,” which designs the reinforced areas on a sail. A three-dimensional model is displayed on a computer and the sail is then analyzed for different pressure points, stress and overall efficiency. This 3-D modeling program allows Klein to virtually sculpt his sails in three dimensions – old world craft of sail making meeting new world technology. Klein admits that the complexity of the software requires complexity in translation. “They don’t always talk to each other that nicely,” he says, adding that his previous experience with AUTOCAD has helped him enormously.

This new technology not only allows for more accuracy in engineering, but also he says his customers will save money through reduced labor costs. He went on to add that “people don’t feel comfortable ordering a sail online, they like to go to a person that can come down to the dock and actually look at the boat and take the measurements.”

Working with a myriad of materials, Klein is able to stitch together faster performing sails made of Kevlar, Mylar, and other lighter weight synthetics for the racing-minded skipper. For those looking for durability and the traditional look of whiter sails billowing against a blue sea and sky, Klein suggests the durability of Dacron. He sews exceptional cruising and lighter weight racing sails at a fraction of what a larger loft would charge. Low overhead with the same technology as the large lofts has allowed Dorsal Sails to thrive in a competitive market.

A new set of sails can increase the speed of a boat up to 20 percent. Obviously this is a necessity for anyone planning on racing their boat competitively. However, even for the cruising sailor, moving their craft through the water with the additional speed adds a satisfying surprise. Jim Rapp, an owner of a yawl-rigged Tartan 34 was amazed at the added speed that his new Dorsal sails provided. Sailing comfortably with his family on board, Jim was able to eliminate the need for a mainsail and sail “jib and jigger” using just a new jib and a mizzen sail aft. This provided him with a controlled sail that was astonishingly fast. Jim could give some reluctant family members a smooth sail without compromising the speed he was after. Kevin Egan, the owner of Kate, an older Ranger 28’, found success in added speed with light weight Mylar sails. Competing in Green Bay races, Kate’s transparent sails seem to disappear into the air as she crawls away from the racing fleet.

Some of Dorsal’s customers come in the way of very small racing dinghies. A competitive class comes together in lower Green Bay racing Lasers, which is also an Olympic-class boat. Recently an Invitation made by Bombardier was racing against these quick and responsive boats at Green Bay’s Windjammer regattas. After countless spankings out on the race course the owner of this Invitation came to Dorsal for a consultation. He left with a new sail and promptly took first place in the very next race, a true testimonial to sail performance affecting speed.

Whether commissioning a new sail to be sewn or stitching up that trusty old rag, Charlie treats his customers with gratitude and respect. His good natured demeanor parlayed with an extensive knowledge makes clients feel at home in this high-tech loft where an already confusing nomenclature could spin further into intricacies of sail making physics.

Knowing the cut and performance of a sail doesn’t start and end on the computer or in a loft for that matter. In addition to Charlie Klein’s engineering and manufacturing experience, he spends his free time trimming the very sails he sews on the waters of Green Bay. An avid sailor, Klein restored his first boat in college, a 19-foot wooden plank on frame-constructed sailboat. He has since designed and built his own sailboat, Wavedancer, a 36-foot Sharpie Schooner. His craft has a centerboard which allows for more up close and personal coastal cruising on the East Coast. It also opens up many more options for shallow water anchoring.

Wavedancer was home to Klein, his wife Susan and their son Tristan as they plied the waters of the East Coast and the Bahamas as well as the Great Lakes. This time aboard has afforded him countless hours of trimming and analyzing sails. Charlie’s passion for the water doesn’t stop at sailing the family Sharpie, however. An avid board sailor, he has designed and built his own boards and sails. A testimonial to an aggressive romp on the waters of Green Bay was a broken board which hung above the loft, smashed from the shear force of wind, wave and pressure on the Green Bay waters, an inventor pushing the limits of his own design.

Additionally, Dorsal designs and creates canvas work that is found throughout the decks of small day sailors and Palmer Johnson mega-yachts alike. Much of his canvas work is completed for the opulent yachts being built at Palmer Johnson. Still with a hand in this facet of the industry, Klein completes the covers for all the finely-crafted deck machinery, right down to the bars and hot tubs that will be sitting in the Caribbean and Mediterranean sun in the not-so-distant future. Accounting for roughly 10 percent of his business, Klein is appreciative of his Palmer Johnson connection. Great Lakes Yacht Services upon which the Dorsal Loft is perched is also a large customer for Klein. Many of the yachts serviced by Great Lakes are in need of canvas work, sail repair and custom sail making. Interestingly, canvas making has also led Dorsal into the commercial awning market. With so many avenues to pursue with a specialty craft of sail and canvas making, Klein could take on many new pursuits. Ultimately, however, he would like to see Dorsal grow more in the direction of sail making than anything else.

When asked about the future of the Dorsal Sail Loft, Charlie made no hesitation, stating that Dorsal Sails is in it for the long run. Spending any time at all with Charlie Klein in his loft stretched with canvas and sail designs, seeing him practicing his craft, would quickly illustrate his direction. Klein’s passion is designing sails that make his customers’ dreams of speed and beauty come alive while onboard their craft. With Klein at the helm of Dorsal Sails many more sailors will be able to continue their passion as they sail over distant horizons.