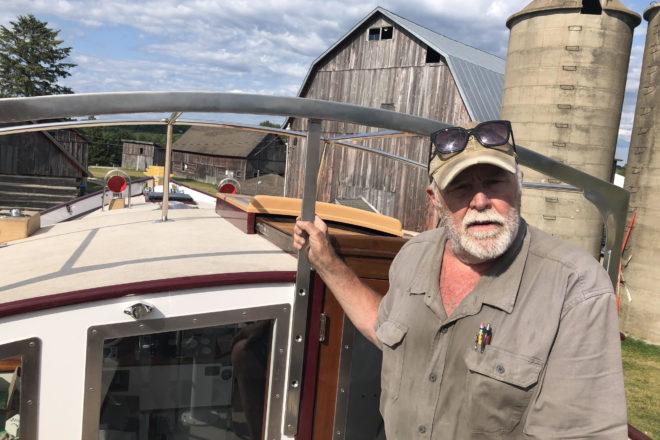 After spending years working on its restoration, Dan McNeil was ready this summer to move his sailboat, Surazo, to Lake Michigan and Green Bay waters. Photo by Craig Sterrett.

Dan McNeil has been rebuilding a historical sailboat since 1988. This year, he set a goal of finally getting the boat into the water in time for the annual Wooden Boat Show in Sturgeon Bay.

McNeil had the boat ready to go, but he needed a lot of logistical help from a local marina and a boat-moving company before he could steer the 75-year-old, 54-foot-long vessel from Sister Bay to Sturgeon Bay in time to show it off.

Why did he want to get the sailboat to the Aug. 5 show?

“What I could do is launch it, but don’t put the masts up and drive it down there with just the motor, and then drive back to Sister Bay and have the masts put in. And I am seriously considering that because I am a vain individual who wants to show this off,” he said, chuckling.

Reconstructing the Surazo has been an odyssey for McNeil. Before retiring from jobs that ranged from roofing and carpentry to welding at Bay Shipbuilding in the 1970s, he traveled 20-40 times each year from Chicago to his brother’s farm west of Baileys Harbor to work on the Surazo, a name that’s derived from a wind that comes down off the Andes Mountains.

After working on it with his son, Aldan; and local craftsmen inside a 60-foot-long Quonset hut McNeil built specifically for the project, he had to remove the front wall of the shed this summer to get the boat out into the open for loading it onto a hydraulic trailer. He said the same driver from Great Lakes Marine Services who delivered the boat to the farm in 1988 would haul the boat to a local marina, on either Aug. 2 or 3, for the launch.

“It seems so unreal to me that this decades-long project could come down to one week,” McNeil said. “There’s so much that I have to do that won’t get done before I put it in the water.”

Those final steps before launch include installing the open-front canvas top, or Bimini, over the ship’s wheel and a waterproof dodger that will allow him to keep the pilot-house hatch open in light rain.

A 2018 story in Door County Living magazine helped McNeil meet four people with Door County ties who sailed on his boat when it was at the Great Lakes Naval Training Center. Ultimately, that story by Peninsula Pulse writer Jackson Parr also led McNeil to finding Georges de Giorgio Jr. in December 2021. He’s the son of the first owner of the boat, who had built it in a small shipyard in Valparaiso, Chile, in 1947.

De Giorgio is 94 years old and lives in Great Falls, Montana. McNeil and his wife visited him in January and put the missing piece of history into place.

“We have almost the complete history of the boat, from the time it was built, all the way up until today,” he said. “To me, it’s almost as interesting as the boat itself.”

De Giorgio Sr. was an Italian expatriate who abandoned Italy during Mussolini’s reign and started the Chilean boatyard. Eventually, he and De Giorgio Jr. sailed the Surazo up to Florida to trade it for a larger boat.

As De Giorgio Jr. worked at ports all over the world, embarked on an Antarctic expedition, lived in far-off places such as Tahiti and befriended people such as Ernest Hemingway, the Surazo had started its new journey on America’s inland seas.

McNeil learned that after the de Giorgios traded in the Surazo, Milton Knight of Toledo, Ohio, bought it and took it to Lake Erie. That second owner got in touch with John Alden, from whose plans de Giorgio built the Surazo, and along with Alden, Knight made a design and new sail plan for the boat.

“They sat down over a blueprint and gave that to the sailmaker. We have that blueprint. We found it online after the sailmaker retired,” McNeil said.

Milton had the boat for several years on Lake Erie and eventually donated it to the U.S. Navy, which used it for training at the Great Lakes Naval Training Center.

After years of service to the Navy and a naval sailing association, the boat fell into disrepair. McNeil found a Chicago Tribune classified ad about it being available near the Calumet River for $1,000.

“The guy I bought it from figured out what it would cost to fix it, and he bailed,” McNeil said.

McNeil owns the original masts but bought a new rig. He said he’d rather sail than devote valuable portions of his retirement years to varnishing a mast. He and his friends fabricated or replicated a majority of the parts of the boat. He said the bilge stringers – boards that run the entire length of the inside of the hull – are original, as is some of the teak woodwork, some of the knees and clamps (structural parts inside the hull) and bronze brackets and hardware. All of the bungs – wooden plugs covering more than 3,000 countersunk screws – were fashioned from reclaimed wood from the Surazo.

McNeil would like to sail it into the Pacific Ocean and beyond after going through the Panama Canal, through which it passed many years ago. Before that, he hopes to sail it for a visit to Chicago, to the Illinois River, to the Mississippi, to the Tennessee-Tombigbee Waterway, to Mobile, Alabama, and then into the Gulf of Mexico.

But those are just his plans.

“You want to make God laugh?” McNeil asked. “Tell Him your plans.”