When my 86-year-old father told me that his 85-year-old friend invited him on a bucket list trip to circumnavigate Door County on a sailboat I asked, “are you guys nuts?” Then, I immediately begged to join them. My father was initially a bit skeptical about the voyage, but he vivaciously accepted my offer to join the crew, and so three of us began making plans.

Dad was recently diagnosed with macular degeneration, an eye disease that will progressively degrade his vision. His first course of treatment brought good results, so I thought it would be wonderful for him to take in the beauty of sailing around Door County. 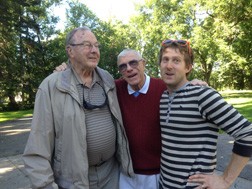 The three sailing partners take a break from their adventure sailing around the peninsula aboard the Hunter 35.5 Legend with Skipper Bill Wilman. Submitted photo.

His bucket list buddy, Dolph Van Laanen, is nimble for his age, yet he copes with severe hearing loss. His hearing aids, with the help of some fine-tuning, work in close quarters where there’s not much background noise. And there’s not much of that to be found on the open water. So, our captain and I quickly learned how to support the eyes and ears of the old friends as we navigated early autumn waters around the peninsula.

Our objective – sailing up one side of Door County through Death’s Door looping around Washington Island and back down the other side – was shorthanded as The DC Figure 8.

First, we needed to find a worthy vessel and skipper. We did some research, and here are some options to consider for anyone planning this kind of trip:

• Captain Hans Ribbens came highly recommended by trusted friends at Alibi Dock Marina. Only, Hans did not have a boat available to him at the time.

• Tom Schroeder of Bella Sailing Cruises replied to an ad in the Peninsula Pulse and offered to sail us aboard the classic 26′ twin-masted Skuppers, based in Ephraim.

Ultimately, we chose the Hunter 35.5 Legend offered by Simple Sail Charters out of Manitowoc Marina, along with the services of skipper and Sturgeon Bay native Bill Wilman. We were certainly going to need a capable and patient captain for this trip and Billy proved to be all we could hope for and more. This punk rock-loving, Mountain Dew-drinking, cigarette-smoking sailor has been on boats nearly since birth, and I sensed his comfort level increase as soon as we got off land and onto water. He led us safely through difficult waters and dispensed the best advice imaginable; he became a valued friend to each of us.

It was Sunday, Sept. 7, 2014, when we passed under the Sturgeon Bay bridges setting out for the lakeside. This beautiful sunny morning promised building wind and waves from the south, so we set course for Washington Island’s Detroit Harbor. To ensure we arrived at a reasonable time, we motor sailed up the mainland.

I had never before seen the extensive wooded shoreline between Sturgeon Bay and Whitefish Dunes. Cave Point’s distinctive caverns stood out as a familiar sight. By the time we reached Jacksonport, we were so far from land that we could barely make out the beach. We passed Baileys Harbor, Moonlight, North and Rowleys bays, and by the time we reached Europe Bay, swells were peaking at four to five feet. The Hunter bobbed on the water like a Clorox bottle. We came about to enter Death’s Door on a broad reach. Some nervousness washed across our faces as a bit of Lake Michigan lapped over the rails. Once in Death’s Door, waves came from all directions. It was a big relief when we entered the wind shadow of Plum and Detroit Islands.

That evening, we found cozy refuge at Nelson’s Hall, where Captain Billy became an honorary member of the Bitters Club by downing a shot of Angostura, a rich island tradition that has its roots in Prohibition history.

We slept aboard, and the wind never let up that night. In the morning we checked the weather. The looming storm we kept hearing about was now imminent. It would be upon us within days with heavy northwest winds. Once it hit, we’d have to shelter in harbor for at least two days, and it would leave chilly, rainy conditions in its wake. Suddenly, summer seemed to be ending and the lake revealed its ominous autumn temperament. We decided to make our trip a loop instead of a figure eight and race down the bay side, making the best of the last fair sailing days of the season.

After breakfast on the boat, we set sail for Sister Bay. With southerly winds now blowing in our faces, we motored past Ellison Bay. Then we killed her engines, opened her sails and cruised for a few hours of blissful, sunny sailing with about 10-15 knots of wind. Dad and I sat grinning as we listened to the sound of the wind in the rigging. We made it to Sister Bay with time for lunch at Al Johnson’s and then toured Peder Nelson’s schooner, the Edith M. Becker. After that, we made it to our cabin at the Little Sister Resort. The sunset during dinner at Fred and Fuzzy’s was spectacular, and, man, it felt good to have a shower and cozy bed.

Tuesday morning, after a hearty breakfast at Al’s, we made our way to the boat. That beautiful south breeze kept blowing under clear skies. We motor sailed toward Sturgeon Bay, threading the needle between Nicolet Bay and Horseshoe Island. It was remarkable to see the new large homes along the shoreline, especially along Cottage Row leading through Juddville. Monarch butterflies fluttered by every few minutes as we sailed.

We passed the famed Boat House of Peninsula Players where I once spent a stormy night. The Peninsula Players was also where my dad served on the board of directors, where my uncle produced, where I acted in Larry Schue’s The Nerd in 1984 when I was 12 and where I first asked the woman who is now my wife to be my girlfriend. No other point on the peninsula flooded the minds of my father and me with as many memories as this one did. I think we each have that center of gravity in Door County, that place that pulled us here to begin with and keeps pulling us back.

Nearing Sturgeon Bay harbor and the close of our loop, we cut the motor as the wind kept building to 20 knots and sailed back and forth in the sun and whitecaps for a beautiful finale. It was great to see my dad and Dolph take the helm with huge grins on their faces. It was a trip we’ll always cherish and a new vantage on Door County that held surprises and memories for all of us.

Tom McKenzie lives in Los Angeles with his wife Jill Newman, and he works for the Arts for All countywide arts education initiative. Whenever he can, he loves to reconnect with Door County, where he co-created the Peninsula Pulse with David Eliot for the paper’s first five years.