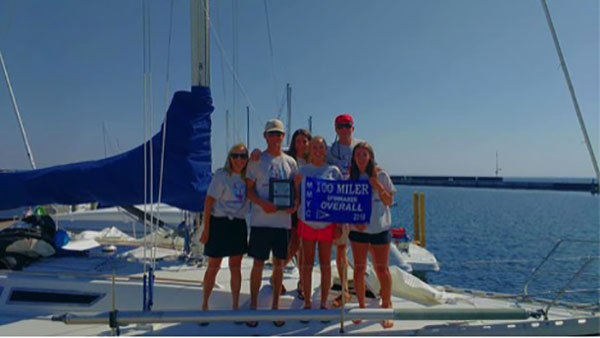 Ephraim Yacht Club sailors John and Deanna Peterson, together with senior sailing instructors from the Ephraim Yacht Club, successfully defended last year’s title by sailing their Beneteau First 38 Charrette to victory in the 82nd running of the Marinette and Menominee Yacht Club’s 100 Miler event this past weekend. This win marked the fourth overall win for Team Charrette since 2011.

The race started July 28 in Menominee in a moderate breeze and circled Green Island, the Fish Creek Bell, Horseshoe Island and Chambers Island before returning to Menominee. Unlike last year when many of the boats withdrew from the race due to the light conditions, this year 32 boats completed the race in various divisions including 16 who qualified for the overall title. Team Charrette was able to stay close enough to the faster boats in the fleet to notch the victory with a “corrected” time of 5:34:32, more than twice as fast as last year’s time after adjusting for each boat’s handicap.

“While this win was our largest margin of victory to date, I am most proud of the fact that our team of six consisted of four women, which is a group that is largely under-represented in the sport of sailing. Sailboat racing is a physical sport that demands a great deal of strength and finesse and this crew had no problem keeping up with some of the more physical teams that we faced,” said John Peterson after the race.

In addition to the Petersons, who took turns driving, the crew consisted of Abby O’Rourke and Anabel Roza on the bow and trimmers Topher Andersen and Sarah Olson in the cockpit. The team began training together for the event in early June.