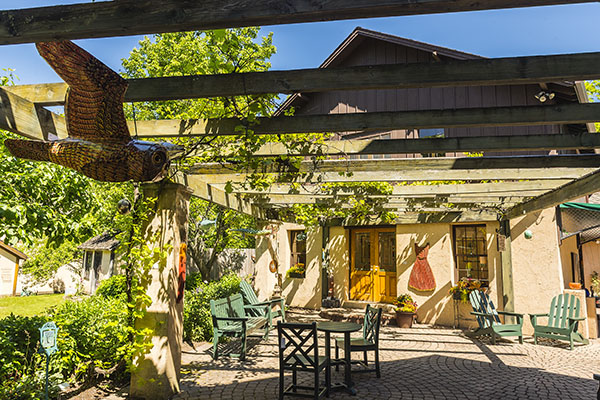 Sales at Door County art galleries have surpassed expectations for a season constricted by COVID-19.

“The key is low expectations,” said JR Jarosh at Edgewood Orchard Galleries south of Fish Creek. “We didn’t know what the season would hold in store, so we have been pleasantly surprised that we have had good traffic; people have been very on board with masks and distancing; and we have felt pretty safe in being open.”

Jarosh is also pleased with sales equal to or higher than this time last year, with what he described as a nice cross-section of customers.

“People are spending more time at home or in their garden and are identifying places they want to add some color or interest,” he said.

The gallery has sold several artist-produced fire bowls, and Judi Ekholm’s artworks for the outdoors – painted on an aluminum panel with a UV varnish and a beautiful plastic frame – have proven popular.

“We also sold a nice piece of glass this week for a client to use as a background for Zoom calls,” he said. “A few paintings have sold that way, too. With COVID, people are spending more time at home and in turn are enriching their places.”

Galleries are also seeing a new set of visitors – both younger and new to the county.

“It’s a younger crowd than last year, and definitely many first-time visitors,” said Chad Luberger, who owns Plum Bottom galleries in downtown Egg Harbor and on Plum Bottom Road south of Egg Harbor. Those new visitors are spending, resulting in what Luberger described as sales that have been stronger than anticipated.

“Door County seems to be somewhat insulated,” he said. “What we are finding is a whole new group of people are coming to the county. The tried-and-true visitors maybe didn’t make the trip this year, but that opened up opportunities for a whole new set of folks.”

Gallery proprietors refrain from getting too precise about their sales, but the visitors this summer appear to be spending freely for work that they like.

“We have seen more of an interest in larger work than we have in the past,” Luberger said. “It spans across the board: We are selling more larger pieces than is typical, whether outdoor sculpture or wall art.”

Door County’s art scene thrives on the combination of music, theater and the visual arts, and the relative lack of music and theater this summer has had a marked impact on galleries.

“Right now we should be seeing our repeat customers for the Peninsula Music Festival, and they aren’t here,” said Shari Gransee at Fine Line Designs, a fine-art gallery at the north end of Ephraim. “Off the top of my head, I can think of five who haven’t come.”

But, like others, she’s seeing a lot of new people – “Door County newbies,” she calls them. Evidence is only anecdotal, but the lack of opportunity to spend on music and theater, or the savings from a canceled vacation somewhere overseas may be freeing up budgets to buy art in Door County.

The short trip from major population centers has also been a bonus. Jarosh said he even sees cautious visitors who come to Door County for a day, rather than risking an overnight stay in a hotel, and they come from Madison, Milwaukee and even Chicago.

“It’s a gas tank away, so it’s easy to come for day or a couple of days, depending on their comfort levels,” Jarosh said.

Even when visitors aren’t making the trip, they’re still remaining loyal supporters of local galleries. Sarah Zamecnik, director of the Hardy Gallery in Ephraim, said she has received multiple calls from past buyers who aren’t coming up this year but want to buy a canvas.

For those visitors, the gallery has opened its Community Mosaic Project, in which artists paint on canvases donated by the Artists Guild in Sturgeon Bay. Fans then buy a canvas for $30 – without seeing it first – as a fundraiser for the gallery.

“It’s a blind buy, and for a $30 donation, you get a random canvas mailed to you at the end of the season,” she said.

Luberger said they’re taking the odd season in stride, and he suspects it bodes well for the future.

“We’re anticipating a kind of explosion next year,” he said. “We have this large group of new people who came this year, and we know the hotels are doing well from room-tax numbers. But next year when we have new people wanting to come and regulars coming back, it will

A nice problem to have.