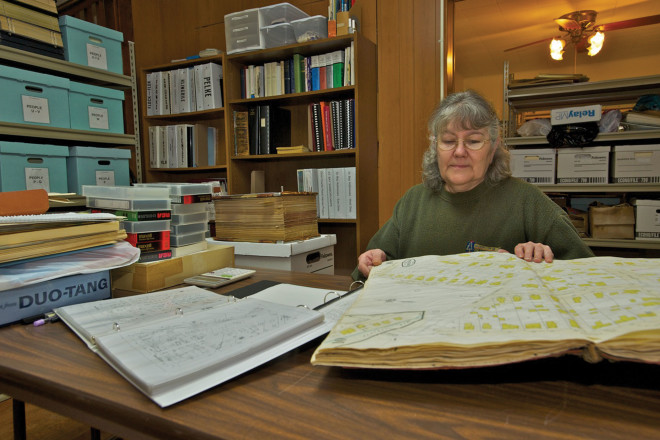 When Sally Anderson was growing up in Sturgeon Bay in the 1940s and ‘50s, she used to ice skate at the rink at Market Square, kitty-corner from the Door County Historical Museum. She often shared the ice with Harry Dankoler, the museum’s first curator, but never imagined she would one day follow in his historical footsteps. 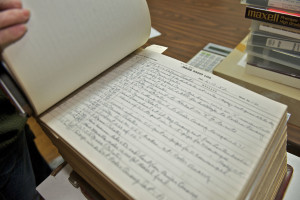 As a teenager, she and Roger Schroeder, a distant cousin, would often meet at Bohns’ Drugstore for a Coke before Sally reported for work at the Ace Hardware Store on Third Avenue owned by her folks. They frequently sat and figured out how they were related to other families in town, and Roger said, “You ought to be writing all this down.’’

She really became hooked on genealogy a few years later as she was completing the family tree her grandmother had begun. Then, as a young wife and mother, Sally Anderson Treichel put her hobby to work by doing research for clients at night, after her children were in bed. Using a homemade light board, she pored over microfilm of county records from the library and traced family lines through marriages, births, divorces and deaths.

She also began going through the library’s microfilms of old newspapers (the Door County Advocate, dating back to 1862, and the Door County Democrat, published from 1893 to 1908) to create a record of every obituary. Additional family information was also added to each card, much of it complicated by frequent changes in the spellings of names. For example, she’s documented several generations of the Baptist/Baptiste/Battise family, beginning in 1842.

In the late 1970s, wanting to gather first-hand information, Sally began tromping through Door County cemeteries, recording names and dates from tombstones and sometimes making sketches of the layouts of plots. Her notebooks prove that she’s one person who truly knows where Door County’s bodies are buried.

Sally’s hobby eventually became an official job. Since the early 1990s, she has been employed part time by the Door County Historical Society to amass and catalog information about the county’s past, referred to as the Door County Archives. “Artifacts go to the museum,” she says, “but I get all the paper.”

For years, “the paper” was stored wherever a bit of space could be found – at the historical museum, the Sturgeon Bay Library, the Door County Maritime Museum and Sally’s home, where some of it still resides.

Maggie Weir, head curator of the Door County Historical Museum, says that Sally has done an amazing amount of work over the years, cataloging the county cemeteries and decades of obituaries. “People don’t realize,” Maggie says, “that in the old days, obituaries were stuck wherever they’d fit in the paper. There was no special location for them. That means that Sally has had to search every page of those blurry old newspapers.”

A number of years ago, the society paid the Door County Maritime Museum $25,000 to build a room to house the materials Sally was assembling. But, the museum eventually needed the space for its own exhibits.

About two years ago, the Door County Board of Supervisors agreed to purchase the old Copiskey House on Michigan Street (once the town “lock-up”) behind the museum as a home for the archives. Sally and her late husband moved everything to the Copiskey House, where she began the task of reorganizing it.

George Evenson, a member of the Door County Historical Society for 50 years and president for the past 10, says that there would be no archives if it were not for Sally. “She deserves a lot of credit,” George says. It provides a central location for what’s left of a bygone day, but it’s already overcrowded and, so far, lacks air conditioning.

Sally dreams of a handicapped-accessible, climate-controlled venue for the Door County Archives, where the public will be able to locate data on their own. For the present, she’s happy to finally have much of the vast store of information under one roof, available by appointment.

Highlights from the Door County Archives 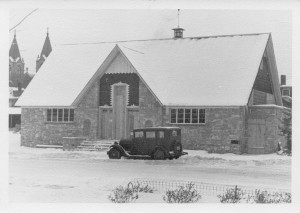 The Door County Archives house a treasure trove of peninsula history. Here’s a quick look at some of the highlights:

If you’re interested in discovering where the bodies are buried – and lots more – Sally’s notebooks are available at the Sturgeon Bay Library, and a call to Sally at (920) 743-2563 can tell you exactly where to look. Much of the data can also be found on the Peninsula Genealogy Society website at www.rootsweb.ancestry.com. Additional information can also be found at www.doorcountyhistoricalsociety.org

The Door County Archives are just one aspect of the ongoing effort to preserve Door County’s past. It began on October 1, 1926, when a group of 20 people met at the courthouse to consider organizing a historical society. Nineteen of them agreed it should be done, and the Door County Historical Society (DCHS) was born.

During the past 85 years, the DCHS has been a strong supporter for establishing the county park system and the Door County Historical Museum. It has erected monuments to historical figures, acquired the abandoned Eagle Bluff Lighthouse in Peninsula State Park and created a historical village at the Crossroads at Big Creek.

The DCHS holds a dinner meeting each month April through November with programs related to Door County history. Attendance ranges up to 120.

The historical museum that the DCHS helped to raise money for in 1938 has been named “the best small museum in the Midwest” by the Chicago Tribune. It occupies a building at 18 N. Fourth Ave. in Sturgeon Bay, next door to a replica of the town’s original firehouse, with three restored trucks, a cell from the original town jail and an old horse-drawn hearse.

There are educational displays, a spectacular “Seasons of Life” wildlife diorama by local taxidermist 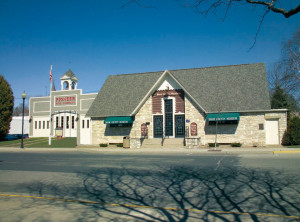 Mike Orthober and, on the lower level, a street scene that includes storefronts representing many early Door County businesses.

Videos and DVDs on Door County history can be purchased or viewed in the museum’s cozy theater, and there’s also a huge collection of historical photos.

For more information about the Door County Historical Society, contact its president, George Evenson, at (920) 743-4945 or visit www.doorcountyhistoricalsociety.org.