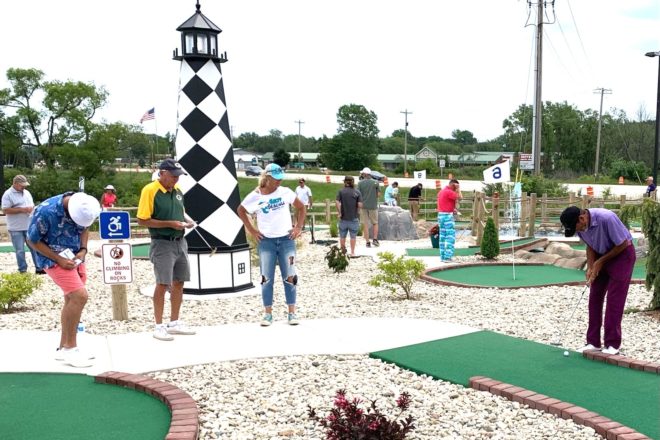 You drive for show, but you putt for dough. Or for bragging rights. Or to win a friendly bet to force a fellow competitor to pay for the post-round refreshments.

In an era of 300-yard driving averages among almost all PGA Tour pros, that short-game adage now holds true more in miniature golf than on 7,300-yard championship courses. And in Door County, golfers – and anyone else looking for a challenge – just gained one more place to test their luck during a round of mini-golf and one new tournament to test their skill.

“We had a lot of fun,” said Hartzell of the inaugural tournament that drew 29 competitors. “All the comments were really positive. Hopefully it will grow and get bigger and bigger. Everybody said they loved these greens and how they were made and how they flow.”

Hartzell had 10 local sponsors for her initial event, ranging from small businesses, her bank and a local beverage distributor to Forest Builders and Lily Bay Sand and Gravel. The latter two constructed the course, which was designed by Harris Miniature Golf Courses of Scranton, Pennsylvania.

She said she was glad to receive friendly support from Tracy and Chris Opper, who have hosted the Red Putter Pro Tournament at their Ephraim course for two decades now.

Chris Opper provided Hartzell with some advice on course and tournament operations, and he played in the Salty Seagull tournament. He said he likes that the course is demanding and enjoyable.

“We’re two completely different types of courses,” Opper said. “We have obstacles. They’re more of a contour type of a course.”

His course requires players to roll the ball over a moving drawbridge and under a lighthouse, for example, while Hartzell’s course forces players to read some tricky slopes and conquer challenging elevations. Opper said he misjudged the slopes and misread the breaks at Salty Seagull more than once.

“You have to play it a few times to know what the ball is going to do,” he said. “It’s difficult, and that’s always what I’m looking for.”

Opper also enjoyed the opportunity to participate in a tournament.

As for the Red Putter Pro Tournament on Aug. 6, registration will start in mid-July.

The Red Putter requires competitors to meet or exceed a qualifying score before entering the event, but Opper said it’s not all that tough to achieve. Anyone can qualify by recording one 18-hole round of 41 (1-under-par) at any point during the year leading up to the tournament. That one score qualifies Red Putter competitors for the Pro Tournament.

“So when you play in the tournament, you can call yourself a pro,” Opper said.