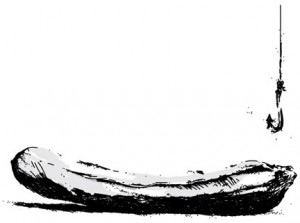 My friend Jay is an electric fisherman. By electric I mean energized, I mean lit-up. Jay is the kind of fisherman to cast a line over the office water cooler, he takes a hawking look at rain barrels. The running water in a stand-up urinal makes him wish he had brought along tackle. He even thinks the deodorant puck is a lost bobber and that someone beat him to a choice spot.

All this is genetic; Jay is the grandson of Pope who lived in the quaint farmhouse south of the Maine Cemetery. Pope was an arch fisherman as is both zealous and jealous. Pope would abandon spring planting to go quest after walleyes. Sometimes when the hay was right to bale musky fever would overwhelm him and he would light out for Sayner or the Namekogan, not at all the oath of a good hay-man.

As said, Jay comes by his fishingness genetically; families are flawed like this sometimes. The Catholic Church once understood the principle precisely, that those who convert from false religions can never be trusted as true path Christians because they have nonbeliever’s blood in them, nonbeliever’s instincts. Belief being an elastic thing causing believers two, three generations later to suddenly revert, a strange proclivity to look for the new moon of Rosh Hashanah, an aversion to pork chops. How close religion is to the soul as fishing I don’t know but could wager a guess.

It is a well-known truth that fishermen are jealous of their waters. I might steal a kiss from Jay’s wife a lot more likely than discover where are Jay’s fishing spots. It is an order of righteousness among fisher folk not to tell where the trout are because the code is you’re supposed to earn the right to fish there. Ph.D. candidates know what this is about.

It happened that Jay dropped by one Sunday morning, in the way of friendly conversation asked what I had for breakfast. I told him, “Scrambled eggs with onion and peppers, and trout.”

“What kind?” he asked trying to sound nonchalant but really wanting to know the source of the trout.

“Green trout,” I replied. A look of puzzlement came over Jay’s face, I could see his breath catch.

“Green trout,” he sorta burst out the words. “What’s a green trout?” he said. I could tell he was interested.

As to trout in Wisconsin there are lake trout, which are really salmonidae, brown trout also salmonidae, rainbows likewise, and brook trout which are salvelinus fontinalis meaning not a solmonidae. The thesis is salvelinus fontinalis until fairly recently were oceanic fish, but during the cycles of continental glaciation became isolated inland by the melt waters and converted to inland fish, maybe sometime in the last 50,000 years. Nowhere on this long list of trout species is there a green trout.

To interject at this point the known promiscuity of zucchini. Of a garden innocently planted to one, maybe two, what the heck three zucchini seeds. So maybe they are small seeds and the spring cold, plant the whole package. About the end of July there arises from the garden this oddly shaped cloud, a green over-mantel, a hillock, a mushroom shaped cloud surely the result of a nuclear meltdown. It’s not the Two Rivers unit gone hot, it’s not radiation and X-rays, it is that zucchini. There is no cure, no keeping up with zucchini, not salads, not bread, not zucchini soup, not fried, toasted, roasted…you know your neighbor doesn’t want another grocery bag of zucchini, even the chickens after awhile turn away from zucchini.

There is but one remedy, the same as the Bible implies, convert the zucchini to fishes, specifically green trout; sliced longitudinally, add olive oil, grill well on both sides, to my mind vigorously blackened. Sunday morning to lie next to the scrambled eggs with cheese, pepper, onion. Soul mates to scrambled eggs is that slab of zucchini. Lying there in that same exquisite pose of trout, specifically salvelinus fontinalis of the kind famous out there somewhere on the Buena Vista. The exact same pose on the plate as a successful expedition of a pedigree fisherman, the kind with flies orbiting his hat, who can whip off a marsh brown like God can make zebras, that close to deity is trout fishing. Except it’s…green trout, salvelinus fontinalis zucchini.