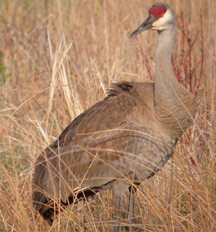 Before nesting, a Sandhill Crane uses its beak to rub mud onto its feathers to help camouflage itself while incubating the eggs.

In looking over our nature phenology journals of the spring of 1980, I find there have been no accurate records of Sandhill Cranes in recent years having nested in Door County before 1980. Up to that point there had been fairly regular sightings of the cranes, but locating a nest containing eggs is another matter.

My guess is that there must be at least several dozen successful crane nestings annually in the county now. In the late 1880s, the cranes’ habitat was rapidly being destroyed by speculators. To make matters worse, these large birds were being hunted close to extinction. Thankfully the federal Migratory Bird Act was signed into law in 1916 in the nick of time, protecting the remaining Greater Sandhill Cranes in Wisconsin, Michigan, Minnesota, and Ontario, Canada. In the 1930s it was estimated only 25 pair bred yearly in Wisconsin.

What a huge boost all the crane species of the world, including the Sandhills, received when the International Crane Foundation was founded in 1973 near Baraboo, WI. Charlotte and I have been fortunate to know Jim Rogers and his wife from Columbia, MO. They spend part of each summer in Baileys Harbor, and Jim, who is very active helping the Crane Foundation, has shared with us many of his exciting experiences in, for example, China, Nepal and Bhutan.

The main thrust of Jim’s volunteering for the foundation has been in helping concerned conservationists in those countries develop more educational projects to interest the people living near the cranes as well as promote scientific studies in order to help the crane species that may be nesting in these areas. 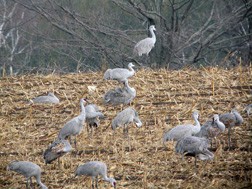 I’m sure it was Jim’s incredible crane stories that prompted us to travel to the Platte River in March of 1995, in the vicinity of Kearney, NE, and to obtain permits to use one of the wonderful blinds at the Audubon’s Rowe Sanctuary. This, as we did our planning, was to be a once-in-a-lifetime experience with the cranes so we made reservations to use the blind in the evening of the first day we arrived and also the very next early morning well before sunrise. Later we both heartily agreed that the $25 per person fee was well worth the price, and then some. The photographing opportunities there are superb.

The area is so attractive to the hundreds of thousands of cranes and other waterfowl, especially the White-fronted Goose, that you can have awesome crane and waterfowl experiences without using a blind, which one must reserve usually a year in advance. By the way your car makes an excellent blind as long as you remain inside. We found that business people, for example, in the Kearney area did their utmost to cater to the wildlife viewers in a remarkable, polite and efficient fashion. Maps and directions were shared and eating establishments were outstanding, as were the sleeping facilities. We found the Best Western Motel to be one of the finest we’ve ever stayed in. 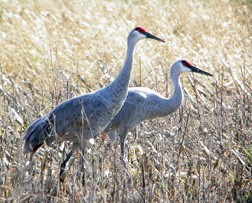 The Sandhill Cranes you will see along the Platte River are the Lesser Sandhill Cranes that congregate there by the hundreds of thousands during their northerly migration. Those we see here in Wisconsin, farther to the east, are the Greater Sandhills. The Lessers winter primarily along the Gulf Coast and nest in the far northern reaches of northwest Canada and Alaska. The Greaters winter primarily in Florida, then migrate each spring north to Minnesota, Wisconsin, Michigan and into southern Ontario, Canada to nest. Nearly all of the Greaters stop each fall during their southerly migration at the famous Jasper-Pulaski State Wildlife Area in northern Indiana to rest and feed for several weeks before heading to Florida.

Wood County, in the middle of Wisconsin, is also center of the greatest concentration of nesting Sandhill Cranes in the state. Head west of Port Edwards, (south of Wisconsin Rapids) on Highway 54 and you will soon be entering their prime nesting habitat. The Wood County Wildlife Area, the state’s Sandhill Wildlife Area, and the Necedah National Wildlife Refuge are excellent places to explore one of the state’s very best areas for wildlife enthusiasts.

We’re fortunate to live within a few miles of Lost Lake which is several miles south-southeast of Egg Harbor. There are also a few good staging areas nearby where a few to a half-dozen cranes congregate early each day where older adult couples strengthen their pair bonds and where the younger birds, hatched the previous year or two, “learn the ropes.” These sites can be very good to witness the cranes marvelous “dances.” On still mornings the volume of the cranes’ calls are so loud that we can actually hear them while we are eating breakfast in our kitchen. 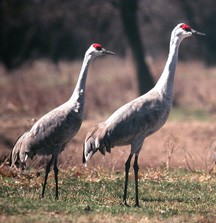 A side view of the cranes show their bustles, typical of all cranes, and bare featherless red crowns, a feature of the Sandhill Cranes.

When you hear single loud piercing bugle calls from the birds these can mean a variety of things such as a crane merely sounding off with the joy of being with others of its kind. Pair bond calls are especially exciting to hear. The male, often with his long beak pointed straight upward, gives forth with one very loud, sharp, quick bugle call that is immediately followed by the female giving two very slightly lower sharp bugle calls. If you are hearing the so-called unison call, which also serves to strengthen pair bonds, you may be led to believe that it is being produced by only one bird rather than by a pair.

Unfortunately cranes throughout the world are steadily losing to humans and their ways. Arthur Singer, in his famous Birds of the World book says, “No more spectacular group of birds exists than the world’s 14 species of cranes, and possibly no group is more in need of protecting.”

Even many parts of the Platte River region in Nebraska, where so many thousands of sandhills stop for rest and food enroute to their Canadian breeding grounds, are in deep trouble. Vast stretches of the broad open channels containing valuable, shallow, open islands and spits have been destroyed. A former manager of the Platte River Whooping Crane Habitat Trust said, “If vital habitat continues to be lost, we may someday know what a lonesome, empty river the Platte in March would be without Sandhill Cranes.”

I marvel at the appearance of an increasing number of Sandhill Cranes in Door County each of the past several springs, a county where development is proceeding much faster than I wish it were. Deep down I feel that these cranes are trumpeting a clarion message, “Save, protect, preserve! Please help us!”