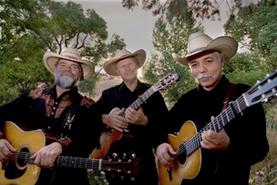 The Santa Cruz River Band takes the stage at the Peg Egan Performing Arts Center in Egg Harbor on Sunday, August 30 at 7 pm.

The Santa Cruz River Band is a beloved musical group from Tucson, Arizona. In 2004, the group’s founder, Teodoro “Ted” Ramirez teamed up with Michael J. Ronstadt to form the duo “Ronstadt Ramirez.” The duo immediately began touring internationally, and their success afforded them the opportunity to expand – and included the Southwestern backing musicians of the Santa Cruz River Band.

The Santa Cruz River Band performs songs in many languages including English, Spanish, Welsh and American Indian. The band mixes up styles by utilizing the songs of Gillian Welch, Bob Dylan, and John Prine alongside well-written originals and a few traditional tunes.

According to Maverick Music Magazine, the songs of the River Band “have plenty to say, but they always say it in style.”

The Peg Egan Center is located on Church Street in Egg Harbor. In case of rain, concerts are held at the nearby Orchards Golf Course. The concerts are free and open to the public.