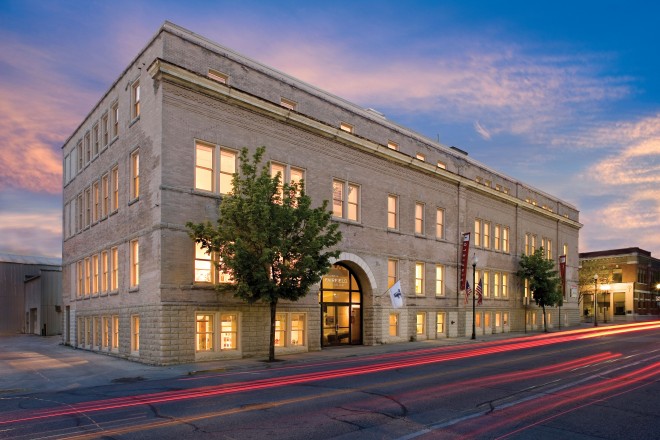 I, like many Northern Door folk, seem to keep just busy enough that my spare time is more often than not filled with mundane tasks such as laundry and dishes rather than exploring the wonders of this great place. However, the fact that my free time is rare does not stop me from dreaming up ways to fill it should the opportunity arise; in fact, between the mental notes and the ones I’ve actually jotted on scraps of paper, there are literally over a hundred items on my list of “Things to do in Door County.”

So, when the editors of Door County Living assigned me this article on the Fairfield Center for Contemporary Art, I thought I had fooled them, accepting an assignment that was essentially an item at the top of my list. I was excited that I’d finally be able to scratch “Visit the Fairfield” from my agenda, all the while under the guise of research.

When I walked through the doors to the Fairfield Center for Contemporary Art on the corner of Third Avenue and Michigan Street in historical downtown Sturgeon Bay one day this past fall, I was lured in immediately. As I stood in the double doorway of the first-floor Arthur Light Gallery, I had to remind myself to exchange pleasantries with the docent. I was already entranced. The tall ceilings and crisp, white walls accented by windows stretched with canvas-like shades and a floor of a rich, chocolaty-brown wood created the perfect shell for the art on display.

Initially, I found myself in awe of the paintings of Craig Blietz’s “Spaces Between” exhibit. In particular, I stared at a large triptych that encompassed almost the entire wall directly across from the entryway. The center panel of “Rotation” showed cows milling about around a tree, and the exterior panels each showed an individual cow facing opposite directions. I don’t think I could have been more in awe had actual cows been standing in the room.

Upon reading the artist’s statement, where he described the “flash point” or that critical moment between action and consequence, and between perception and reality, as well as browsing through the exhibit brochure, I gained a greater appreciation for how our points of view and our perceptions truly shape the art that we see. I took my time, pausing in front of each piece, soaking in the layers of paint and the layers of meaning behind each flash point. The further I traveled around the room, the more intrigued I became with each of the paintings and the collection as a whole. A few chairs dotted the exterior walls, and I was tempted to take a seat to allow my thoughts time to coalesce.

Eventually, I traveled upstairs to the third floor, where potter Chad Luberger’s exhibit, “Storytellers,” was on display in the Newkirk Gallery. Natural light from an oversized skylight filtered down onto the collection of porcelain vessels, which each captured a moment in time. Luberger, a previous Peninsula Art School Emerging Artist and resident-artist at Plum Bottom Pottery, has rapidly built a name for himself in Door County, which was evidenced not only by the body of his work on display at the Fairfield, but also by the guest comment book which read like a “Who’s Who” of the Door County art community.

In addition to Luberger’s work, pieces of the permanent collection were found in the adjoining room. Even though the Henry Moore lithographs and etchings on display depicted whimsical trapeze artists and circus scenes, I found myself once again tempted to take a seat and contemplate the profundity of the art in front of me. The collection was truly an international representation of contemporary art.

I continued on my way, traveling all the way down the slate gray-tiled staircase to the lower level which houses the b2 Gallery. A rather recent addition to the Fairfield’s exhibition space, it is described as a “laboratory and exhibition resource for aspiring, emerging and professional artists and students residing full time in Door, Brown and Kewaunee counties.” On display was an exhibit entitled, “Illumination.” And while the curatorial aspects of the exhibit may have been a little less polished than that of the other two spaces, the artwork on display captured my attention nonetheless. The detail within Nannette Champeau’s and Mary Bosman’s paintings captivated me, and the smooth lines of Angela Lensch’s “Spirit Lady” wood carvings made me want to dance. Also, the installation of Lensch’s branch lights within the closet spoke to the potential of this exhibition space for local artists.

I ended my perusal of the gallery in the lobby, which seemed a rather awkward way to view the museum, but looking back, it encapsulated my experience rather well. A plaque etched with an image of William S. Fairfield read:  “Scrupulous journalist, passionate public servant, visionary conservationist, successful real estate developer, wise art collector, and good friend to his native Wisconsin.” I stood there taking a moment to comprehend the weight of each of those words, knowing that they must hold merit if my surroundings were Fairfield’s lasting legacy. My eyes drifted up to a large abstract painting by Emmett Johns that filled the void of the three-story wall, and the notion of just how significant an artistic space like this was for Door County became clearer.

A few days later when I returned to talk with Exhibition Director Shan Bryan-Hanson, she reiterated and clarified this notion. While Door County is seen as an artist’s retreat – and there are hundreds of galleries that dot the rural countryside of the peninsula – The Fairfield Center for Contemporary Art rounds out a different aspect of the art scene. According to Bryan-Hanson, “The Fairfield’s niche is contemporary art, which can be a somewhat ambiguous term…[but] we are trying to define what it means for the Door County community.”

And in response via email to a similar question regarding the Fairfield’s place within the Door County art scene, Executive Director Walt Freckmann solidified the Fairfield’s role. “We offer a totally unique setting for the display and enjoyment of contemporary art, and for the preservation and showing of works by Henry Moore and the other artists in our permanent collection.”

While I thought I was fooling my editors, they actually pulled a fast one on me. Not only am I feeling exceptionally guilty that it had taken me so long to explore this particular art haven, I now also realize that it’s an item I will never be able to officially scratch off my list of “Things to do in Door County.” As new exhibits transform the atmosphere of the art center, I realize it will be all the more reason to return – and all the more reason to not do my laundry.

Throughout the winter, the Fairfield Center for Contemporary Art will display and rotate portions of its permanent collection – which includes more than 85 prints and bronze maquettes by Henry Moore, as well as artwork by Swiss sculptor and painter Alberto Giacometti, French painter Fernand Leger, Belgian surrealist painter Rene Magritte, Russian pioneer of abstract painting Wassily Kandinsky, and more – in the state-of-the-art Arthur Light and Newkirk Galleries.

The b2 Gallery on the Fairfield’s lower level will continue its monthly rotation of artwork by aspiring, emerging and established local artists and students who live full time in Door, Brown and Kewaunee counties. A few highlights include David Starr, Mary Anderson, and a Children’s Art Exhibition.

Beginning in November 2007, the Fairfield Center for Contemporary Art will offer daily (Wednesday through Saturday) guided gallery tours. These docent-led tours will commence at 1:30 pm and provide museum visitors an intimate opportunity to learn more about the art center’s signature artist Henry Moore, the world-class permanent collection, as well as the rotating exhibitions in the b2 gallery. These tours are free and open to the public.

In addition to the tours, another educational opportunity that the Fairfield Center for Contemporary Art will present this winter will be “The Saturday Salon.” From January 5th through March 29th, the art center will welcome local artists at every level for a Saturday afternoon of drawing and painting in the galleries. The inspiration for these salon sessions derives from the tradition of painters copying the masters. Artists are asked to bring their own drawing and paintings supplies, and the Fairfield will provide the space and inspiration. This event is free and open to the public.

There will be a group show in April and then in mid-May Sandra and Wence Martinez will kick off the Fairfield Center for Contemporary Art’s high season. The upcoming year promises to be remarkable, as November 2008 will find the gallery celebrating its 10th anniversary.

Henry Moore (1898 – 1986) was one of the most influential artists of the 20th century; in fact posthumously, some claim he was “the greatest sculptor” of his time.

While his sculptures, drawings and graphics appear in collections worldwide, early on in his artistic career reviewers were critical of his work. Now seen as pivotal, Moore’s radical modernism in the 1920s and his experimentations with abstraction and surrealism in the 1930s were underappreciated and misunderstood.

While some feel World War II interrupted Moore’s creativity with his sculptural work, quite a few others recognize this time period as the turning point for Moore. It was during World War II and his stint as an Official War Artist that he gained popular recognition and acclaim. In particular, Moore’s “Shelter Drawing” series – depicting British citizens huddled in the London underground in an attempt to avoid the aerial Blitz – are looked upon as one of the greatest achievements in the artist’s career.

At the conclusion of the war, the criticism Moore was subjected to early in his career gave way to a wider public acceptance. Moore became almost an iconographic figure within the art world, where everyone wanted a piece of artwork by Henry Moore. During the last four decades of his life, Moore’s reputation continued to grow; he was showered with awards, honorary degrees, prizes and a plentitude of commissioned work.

By the time of his death in 1986, Moore was an inspiring presence in the art world and his work had become synonymous with modern sculpture. The Henry Moore Foundation claims that the body of his work includes about 919 sculptures, 5,500 drawings and 717 graphics.

For more information on Henry Moore visit the website of the Henry Moore Foundation:  www.henry-moore-fdn.co.uk.

The Fairfield Center for Contemporary Art lives on as the legacy of William S. Fairfield (1924 – 1993). Fairfield, who spent his last 25 years in Door County, flourished in a number of professions – including an investigative reporter, an environmentally conscious real estate developer and a key advisor to Wisconsin Governor Gaylord Nelson – throughout the course of his life.

A Harvard graduate, Fairfield was also a visionary, a public servant and an art collector. One of Fairfield’s visions for the community he had grown to love was an art center where the people of Door County, its artists and visitors alike, could see and learn about contemporary and modern art from around the world.

Upon his passing, Fairfield left a large gift to the Door County community in the form of his extensive collection of Henry Moore prints and maquettes.

In 1997, with Irene Newkirk as the chairwoman, the Fairfield Foundation was formed to ensure that Fairfield’s wishes would be carried out. The artistic core of his donation was used to establish the permanent collection, and the remainder of Fairfield’s gift was used to purchase and renovate the historic building at the corner of Third Avenue and Michigan Street in Sturgeon Bay where the Fairfield Center for Contemporary Art stands today.