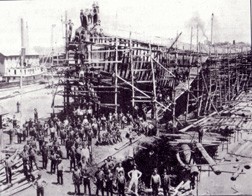 The ‘Australasia’ was constructed in West Bay City, Michigan, and launched in 1884. At 282 feet in length, the ship was gargantuan and dwarfed nearly all other wooden ships of the time. Photo courtesy of Tamara Thomsen, Wisconsin Historical Society.

There were no heroics involved in the sinking of the Australasia, a gigantic wooden ship now in pieces at the bottom of Lake Michigan, just a paddle from Whitefish Dunes State Park.

“There was no storm, there was a fire…and a turkey dinner, which makes this story so fun,” explains Carolyn Rock, natural resource educator at Whitefish Dunes. Gesturing towards new informational panels about the park’s shipwrecks and a small award-winning wooden model of a section of Australasia, Rock tells the story of the wreck.

The year is 1889. Australasia steams south and the crew notices a fire when they pass Baileys Harbor. “And guess what the crew does? The crew goes to have a turkey dinner. They go have dinner!” laughs Rock. “I mean who in their right mind would be like, ‘Hmm, we’ve got a fire on a wooden ship with coal or we have a turkey dinner. It must have been good, that’s all I can think of.”

The crew ran the ship aground, brought their turkeys with them in little rowboats to the shore. When they reached the shore, they went to a tavern in Jacksonport while the rescue crew showed up and ate the rest of the turkey dinners in the ship.

“I want to know who the chef was,” laughs Rock.

The burning vessel was left in 15 feet of water. “It’s in 25 feet of water now, so you can imagine the lake level was a little bit different back then, a little shallower,” explains Rock, who goes on to tell of fights that broke out between the crew on their way back to Sturgeon Bay. “You can start thinking, ‘What would have caused a fight? Was it animosity? Did someone eat the rest of your turkey dinner? Did someone call someone something else?’ We only know what’s written in the papers and the records we have. We only know with the evidence that they left behind, the items.” 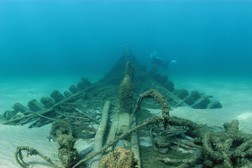 ‘Australasia’ lies in 25 feet of water a few hundred yards off the Whitefish Dunes State Park beach. Much of the hull burned away, but significant portions still lie beneath the waves. Photo courtesy of Tamara Thomsen, Wisconsin Historical Society.

“It’s interesting to be the first to see some of these wrecks,” says Thomsen. “It’s like a time capsule. We found a shoe, a lot of brass, great big globs of brass which shows the inferno that was inside that ship.” The surveys also teach archeologists more about the builder of these massive wooden ships, James Davidson.

“These Davidson vessels are immense,” says Rock. “Australasia is really quite unique because it’s so close to the shoreline. So if you’re not a diver you can still go and look with a kayak or a rowboat, you can snorkel. But we really, really want people to understand: don’t move anything out there or take anything. That is everyone’s.” 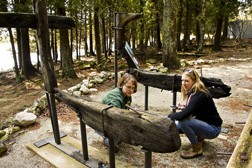 Carolyn Rock of Whitefish Dunes State Park provides commentary to writer Sally Slattery on the outdoor exhibit at the park featuring a number of shipwreck pieces that have drifted to shore. Photo by Len Villano.

When pieces of the eight shipwrecks in Whitefish Bay drift ashore, Rock and her crew put them on display, primarily in an outdoor exhibit just a few yards from the nature center. The exhibit features the barebones framework of a vessel: the frame pieces, the deadwood, rabbit plates, and a stock anchor (which is “really inefficient,” explains Rock. “More than one ship has gone down because of a stone anchor”).

Because of the number of shipwrecks, they have a difficult time discerning which pieces come from which shipwreck, except for one piece featuring a charred end. “This piece is burnt,” explains Rock. “This piece is the only piece we know exactly where it’s from – the Australasia.”

One of her favorite pieces comes from a smaller vessel that was used simply to haul stones. “The Australasia is like whoa! It’s big. It’s impressive. It’s historic. It has an amazing story behind it. But there are a lot of little boats out there, a lot of little vessels, that all they did was haul stone,” says Rock. “But they still were loved and the reason we know that they were loved or that someone really had a care for them was they have a figurehead. Someone who built it and cared for it, cared for it enough to put a figurehead on it. When you think about it, it’s like no matter if it’s the largest sailing ship in the world or it’s something that’s hauling stone – you have this human connection behind it.”

A grand opening celebration of the new installations will take place May 10 at 1 pm and feature a ribbon cutting ceremony and unveiling of new signage at the outdoor shipwreck exhibit. Thomsen will speak about the Australasia and its shipbuilder James Davidson.