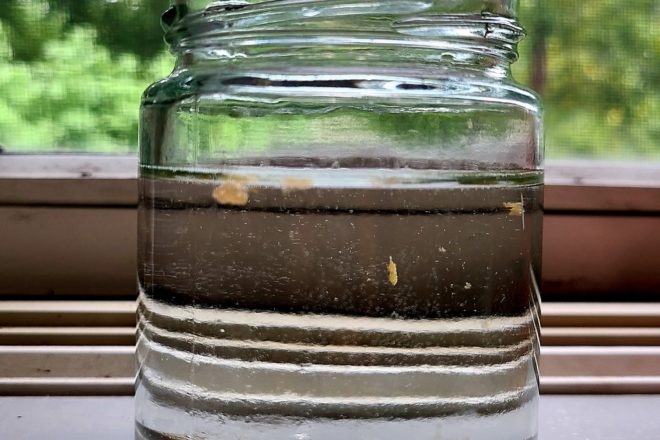 When saving tomato seeds, soaking the pulp in water will help release the viable seeds. Simply cut the tomato in half, then scoop or squeeze out the seeds into a small glass jar. Add water, and set the container aside for three to five days. This process mimics the natural fermentation process of a tomato when it’s left on the vine, becomes overripe and then drops to the ground to rot – sometimes producing volunteer tomato plants the following season. When you re-create the fermentation process, you can separate the bad seeds that float to the top from the stronger, more viable seeds that sink to the bottom. This process can also be used for cucumber seeds. Photo by Sara Rae Lancaster.

If you walk through Dora Leonardson’s garden, you’ll likely see some remnants of the summer’s peas and beans, now well past their peak, that are fading and drying out on the vine. This isn’t the sign of a lazy gardener who’s procrastinating with end-of-the-season cleanup. In fact, it’s quite the opposite: Leonardson intentionally left these plants behind to dry so that in a few weeks, she could collect the pods and save the seeds inside them, giving her a jump start on next year’s garden.

The idea of saving versus buying seeds for her straw-bale vegetable garden first piqued Leonardson’s interest when, as part of her required volunteer hours as a Master Gardener, she helped to organize what eventually became the Door County Seed Library: a community resource that provides a variety of vegetable, herb and flower seeds that can be “checked out,” free of charge, to plant at home. Some of the seeds in the library are donations from seed companies, but others come from gardeners who have saved seeds from their own gardens.

“Seeds are really expensive, especially if you’re going to plant only a few,” Leonardson said. “You have to buy a whole packet of seeds even if you’re going to plant only 12.”
Aside from being frugal, seed saving can also help to alleviate the impact of potential seed shortages because of high demand and recent supply-chain issues. It’s also a way to ensure that you fill your garden with your favorite varieties. And though the process may sound complicated, it’s really quite simple and fun – for gardeners of any experience level – when they follow a few tips.

“Peas, tomatoes and beans are the easiest to save,” Leonardson said.

Though peas and beans use a different seed-saving technique than tomatoes (we’ll get into that in a minute), these three garden staples tend to be most people’s introduction to seed saving – partly because of ease, and partly because of the availability of heirloom varieties. It was tomatoes that gave Leonardson her start.

“Every year, I try about six different varieties of tomatoes,” she said. “It’s a mix of a few favorites and a few new ones, and maybe some that are just interesting to me.”

When saving seeds, you’ll want to know what type of seed that fruit, vegetable or flower came from: hybrid, open-pollinated or heirloom.

Avoid saving and planting hybrid seeds if you want the plants grown from that seed to be the same as their parents.

“You can’t bank what type you’re going to get,” Leonardson said.

Additionally, plants grown from saved hybrid seeds tend to be less vigorous and yield less than the parent plants.

On the other hand, open-pollinated and heirloom seeds produce plants that are true to their parents. Without getting too far into the weeds about the differences of each, an open-pollinated seed produces a plant that relies on insects, birds, wind, other natural means of pollination or humans; and an heirloom seed comes from a plant that has a history of being saved and passed down year after year. Both types of seeds produce a plant that is true – or looks like – the parent plant.

Although saving wet seeds requires a couple of extra steps, the process is fairly simple. When saving tomato seeds, for example, the seeds need to ferment slightly in water. Though not an absolutely necessary step, it does make it easier to separate them from their gelatinous-like casing inside the tomato and sort out the good seeds from the bad.

“I start by scraping out the seeds,” Leonardson said. “Then I put them in a little water in a glass and let them sit in that for about a week.”

During that time, what she referred to as “the scum” – a moldy film – rises to the top. It can be alarming, but it’s a sign that your seed saving is on the right track.

At the end of the week, carefully remove the film, add some clean water and stir. The good seeds will sink to the bottom of the glass. Remove them, dry them on a paper towel and you’re all set to store your first batch of saved tomato seeds.

When saving the seeds dry – from beans or peas, for instance – you can let the plant do some of the work for you. Start by allowing the pods to ripen on the plants, then leave them on the plant long after their ideal harvesting stage, when the plant is dry and turns brown. If you can hear the seeds rattling inside the pod, that’s when you want to harvest them.

From there, remove the seeds from the pod and discard any that are damaged or discolored. If needed, let them continue to dry on a paper towel a bit longer. Then place them in a paper packet, label it and put them away until next season, or even the season after.

“Each year they will be a little less viable,” Leonardon said, “but most seeds you can use the next year and then save for another year or two.”

There are many methods for storing seeds, but Leonardson uses and recommends small paper seed packets. A paper envelope will work as well, and a glass Mason jar is an option, though they tend to be too large for the number of seeds Leonardson saves. Avoid using plastic bags because they can collect moisture.

“The seeds need to be good and dry so they don’t mold or mildew,” she said. “Paper packets also make them easier to organize in a drawer or a box.”

Leonardson’s other organization tip is to label the seeds right away.

“I mark them immediately because in just a few weeks, I may remember that the seed is a pepper, but not whether it’s a hot pepper or a bell pepper,” she said. If you’re looking for additional guidance as you begin your seed-saving adventure – or general gardening advice throughout the growing season – Leonardson recommends Week-by-Week Vegetable Gardener’s Handbook by Ron Kujawski and Jennifer Kujawski.