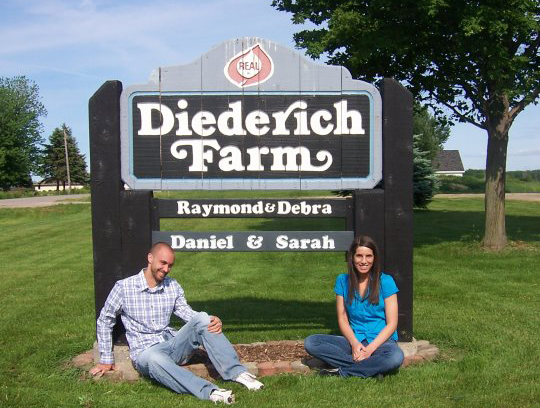 Daniel and Sarah Diederich said they’d rater initiate new practices than wait for regulations to dictate to them.

While some farmers are getting a bad rap for expansion, some are taking an active role in being a part of the solution to clean water instead of the problem. Dan Diederich of the century-old Diederich Farms LLC in De Pere thinks farms need to be active in finding solutions to help both the watershed and themselves.

“It’s taken a lot of years to develop into the massive issue it is,” said Diederich, owner of Diederich Farms, on the contamination of Lake Michigan and its watershed. “If you get ahead of the game…you start doing practices that the public wants to see. If you don’t choose to do it, then someone is going to make you. It’s going to become a law.”

The danger in laws coming down from Madison to dictate how farms should operate is that different farms deal with vastly different problems across the state. A practice that works in the deep clay near Diederich’s farm won’t work in the karst region of Door County or the driftless sands in the southwestern part of the state.

“When laws come down and they start blanket applying rules like that, then somebody ultimately gets shafted,” Diederich said.

To get ahead of the curve, Diederich is trying to reduce the amount of water his farm uses. Not only does the practice conserve water and save money, it also makes it less likely for dirty water and nutrients to be washed off the field and into the watershed.

Diederich plants cover crops on all of his acres but he is also shifting to a method of farming that will eliminate tilling the soil.

“The reason we till land is complex, it’s not just something we do for fun,” Diederich said. “When you come in and plow, you’re disturbing the ecosystem that develops in that soil. When you till the ground, you will break it all up and you allow for the possibility of sediment to leave, soil to leave.”

Diederich said tilling does benefit soil and crops by increasing germination and burying plant matter, but the issue of runoff and his potential operation savings helped him make the decision to switch.

“It’s just a cost issue of driving over the field. It costs money, fuel, man hours,” Diederich said, adding that the cost benefits don’t typically surface for about five years, which makes many farmers hesitant to adopt them.

But for Diederich, the need to do something for the water and the public perception of farming operations adds to those benefits.