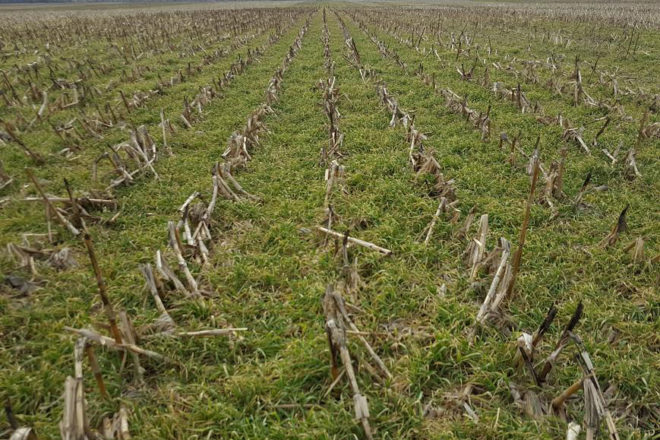 Farmer Kevin Kiehnau said cover crops like rye hold onto more moisture and nutrients. “You can see it. The fields are greener…They can better hold onto that runoff.”

Kevin Kiehnau knows both sides of the water pollution story. The Sevastopol native went from being a conventional dairy farmer in 1979 to becoming certified organic in 1994. Now he manages farms across five states for Organic Valley. He knows farmers are stubborn when they have been using certain practices for decades.

“It’s really hard to change culture,” Kiehnau said. “These farmers, and I’m one of them, have been doing the same thing for 20 years and its been working.”

Data on the pollution levels in the waters of Green Bay and the watershed show that the practices might not be working as well anymore but Kiehnau is confident that it’s a problem of management, not volume.

“I’d hate to see everyone point fingers at the big farms,” Kiehnau said. “I do think there’s places where it’s inappropriate, karst bedrock for instance. I don’t think you can have a 10,000-cow farm in Northern Door. You don’t want to be stupid.”

Kiehnau first got involved with Reid Ribble’s Save the Bay initiative when the former congressman visited some Organic Valley farms. Ribble liked what he saw and asked Kiehnau what they were doing differently.

“Cover crops and grazing are best practices, whether you’re organic or not,” Kiehnau said. “They hold onto more moisture and nutrients. You can see it. The fields are greener this time of year. They can better hold onto that runoff.”

Cover crops are typically grasses or legumes that are planted after the growing season. They add structure to the soil and, since they need nutrients to grow, can grab onto excess nutrients that would otherwise leech out into the water supply. In the spring, farmers can till the cover crop and enjoy even healthier soil for their cash crops.

“That extra four percent means it can probably hold onto another inch of rain,” Kiehnau said.

But he understands that farmers have been doing things the same way for generations and change is tough.

“You need to educate them,” Kiehnau said. “They won’t believe a report or a chart or a university study. You need to get them out in the field and show them that it really does work.”

Kiehnau has continued working with Congressman Mike Gallagher on the Save the Bay initiative and is glad to see it wasn’t just Ribble’s project.

“We were trying to talk to Gallagher about finding measurable ways to check our progress. I don’t think you can test the bay or the lake because it’s just so big. I think we should be testing the streams and tributaries in the spring,” Kiehnau said.

“I don’t care if they’re a Democrat or a Republican. They should do what’s right. I was very happy to see that Gallagher was going to keep this going. I hope people understand that it’s not going to be a quick fix. You have to change the culture and that can take a while.”