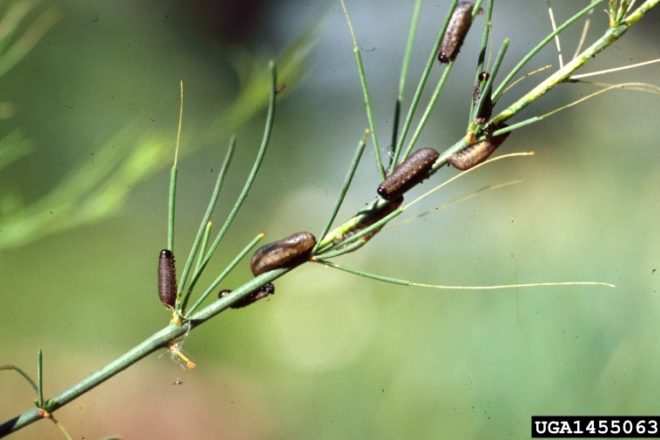 Asparagus shoots emerging from the soil is an indication that spring has (finally) arrived. This perennial plant is common in both gardens and growing wild along roadsides.

Asparagus spears (shoots) are harvested by snapping them off at the base when they are 5-8 inches long. The plants will continue to send up shoots, which can be harvested. In order for the plant to survive, however, harvest must stop in the mid-summer to allow for the plant to mature and store enough energy in its roots to survive the winter.

In an established asparagus bed (four years old or older), harvest can continue for about 8-10 weeks, with July 4 being a typical stopping date.

Once left to mature, the asparagus spears will elongate into a tall plant with fern-like foliage. 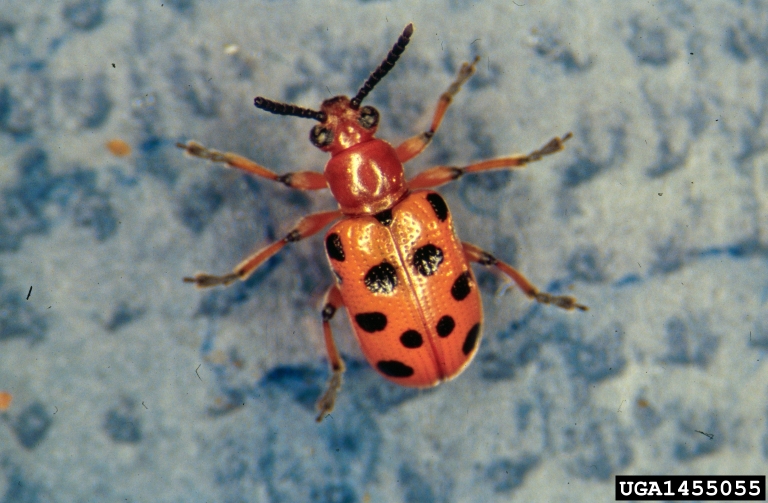 Both species of asparagus beetles overwinter in plant debris as adult beetles, and become active in the spring when the asparagus shoots being to emerge. Common asparagus beetle adults and larvae feed primarily on spears and ferns. The spotted asparagus beetle typically emerges a bit later and mostly feeds on asparagus berries. There can be two to three generations of each species per year.

Infested asparagus spears often are disfigured, have eggs visually present along the spear, or contain larvae within the tip of the spear. Late-season feeding is primarily to the ferns, and very high populations can result in defoliation. If the plant is defoliated, it is unable to store as much energy in its root system for the winter and in severe cases could lead to plant death. Feeding on the berries does not affect the survival of the plant.

Options for controlling common asparagus beetles in a small garden include picking the beetles off the plant and dropping them into a bucket of soapy water. This will need to be repeated frequently. Also, inspecting asparagus shoots and scraping off any eggs can reduce the beetle population. Removing plant residue around the asparagus patch in the late fall removes overwintering sites for both species of asparagus beetle, leading to lower populations the next spring.

Asparagus spears with eggs on them can be scraped off and are safe to eat. Likewise, if the tip of the spear contains beetle larvae, it can be cut off and the rest of the spear is fine.

In the rare situation that an insecticide application is needed, make sure to carefully read the entire pesticide label before purchase and before use. All pesticides have a printed pre-harvest interval which is the amount of time required between the application and when the crop can be harvested. Because asparagus is harvested so frequently, any insecticide used should be labeled for use on asparagus and have a very short pre-harvest interval. If there are sections of an asparagus patch that has a higher infestation of common asparagus beetles, using an insecticide in just that area can be effective. Insecticides should also not be used if there are bees or other pollinators present.

Common asparagus beetle populations can have upwards of 70 percent mortality due to an extremely tiny wasp, Tetrastichus asparagi, which lays its eggs within asparagus beetle eggs, parasitizing them. These wasps are less than 1/8 of an inch long and metallic green. If you look closely, you might be able to see some of these wasps at work in your asparagus patch. Insecticides will kill these wasps as well, so only use insecticides if absolutely necessary and don’t treat the entire patch at once.