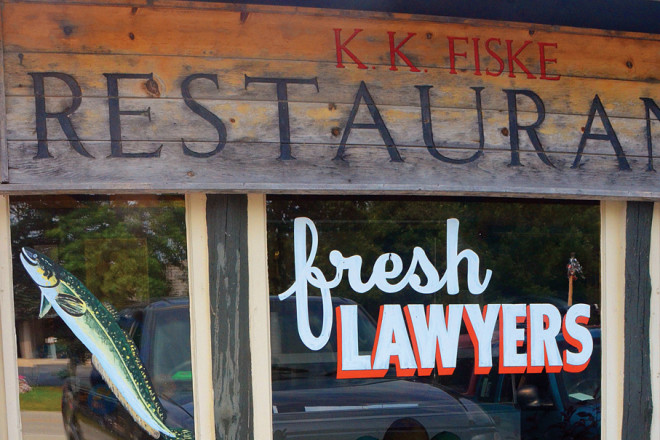 The Friday night fish special holds a somewhat legendary status in Wisconsin. A good fish and chips fix – washed down with a cold microbrew – marks the end of the workweek and beginning of a weekend. Now, there’s a new fish on the scene. The lawyer fish, also known as burbot or freshwater cod, can be prepared just about any way an imaginative cook dreams up.

For many years, fishermen pegged lawyers as bottom-feeders, like carp, and disregarded them. For this reason, they are considered a “rough fish,” meaning there are no permits for catching lawyers. In Door County, only one person commercially targets this fabulous fish (while others may catch them on accident), and he’s been doing it for 30 years. 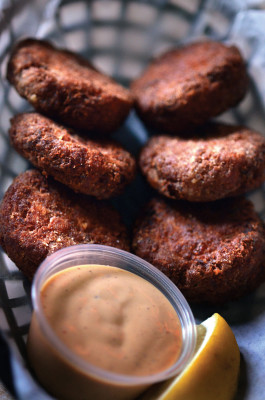 Ken Koyen, owner of K.K. Fiske on Washington Island, was first introduced to lawyer fish when, on a recommendation from a fellow fisherman, he and his father boiled them for lunch while out on the tugboat.

“In the past there’s been no demand for them,” Koyen said. “They weren’t known for their eating quality. Now, the demand in the summer is greater than I can provide. In the winter we serve them ‘All You Can Eat,’ but then there aren’t enough people around to eat them all!”

Known in other parts of the Midwest as mud shark, lush, ling or eelpout, the fish is called lawyer in Door County because, fishermen say, its tiny heart is located right next to its rear end. That certainly doesn’t stop us from eating them any way we can think of. At last count, there were at least 10 different ways to eat a lawyer fish in Door County, from baking to broiling to poaching and pan frying.

The lawyer’s incredible versatility makes it unique among freshwater fish. It also keeps people coming back for more.

Koyen said, “We bake, boil, broil, deep fry and pan fry them…just about any way you’d want to eat a fish, you can eat the lawyer. I think next year we’ll be offering a lawyer fish burger. They are hands down the best eating quality fish in the Great Lakes. If you looked it up for protein, calories, chemical content, they are better than the majority.”

There’s only one caveat with lawyers:  you have to eat them fresh. Once frozen and thawed, the meat becomes rubbery and loses flavor. A fresh lawyer fish has delicate, light, flaky meat that’s not at all “fishy” tasting.

“They live on other fish – crabs, perch, whitefish, zebra mussels, chubs…almost anything! Roughly one-third of their body weight is meat. Lawyers have a huge head and a huge liver, which is probably why the meat is so good. The liver is for purifying the body,” Koyen said.

Over at the AC Tap, Steve Mueller makes a lawyer fish cake that rivals any gourmet crab cake. 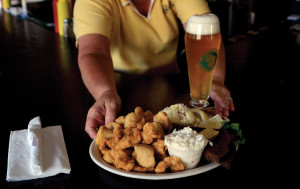 Mueller said, “I couldn’t get a good, decent crab cake that wasn’t going to be $13. I also wanted a local product, and Jim Laughlin was getting me fresh lawyer fish. I think it’s better than crab because the lawyer fish tastes a little milder, so it lets a bunch of flavor through.”

Mueller offers six one-ounce lawyer fish cakes to an order, served with a chipotle mayo, for $5.75.

When he gets enough fresh lawyers, Mueller adds them to the Friday fish special.

“We either offer them fried or poached with fresh dill. When you poach them, they taste like poor man’s lobster – it’s wonderful.”

And the fun doesn’t stop there. Mueller has also tempura battered lawyers and put them into sushi rolls, steamed them in tinfoil and served them with mango salsa and onion, made a dip with cream cheese (like a whitefish spread) and put lawyers and cream cheese in a wonton skin and fried it.

So add a little variety to your Friday night out, and try eating the lawyer fish any of 10 ways. With all the options, it might be worth going out for fish Mondays, too. Eating locally caught fish on the Door Peninsula just got a lot more interesting.