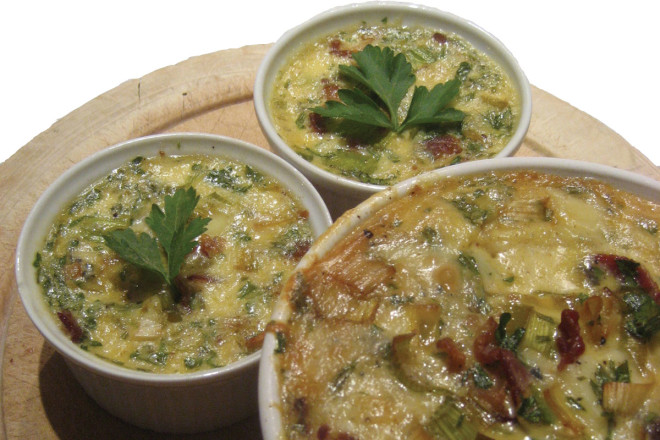 Leeks, with their mild and sweet onion flavor, do not often find their way onto our tables, except in soups, like potato-leek soup and its cool French cousin, vichyssoise.

These rich, savory custards, however, showcase the subtle sweetness of leeks, brought out by the mellow tang of Gorgonzola cheese and the salty, smokiness of bacon. In the spring, wild leeks (or ramps) can be used in place of traditional, cultivated leeks, though they will pack a much stronger onion flavor. For a vegetarian version, omit the bacon and use a tablespoon of olive oil to sauté the leeks. 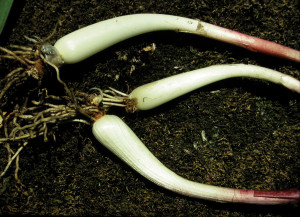 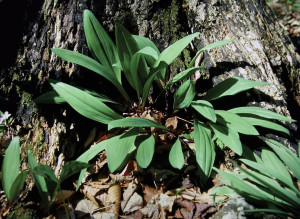 Over medium-high heat, render the bacon until crisp. Trim off the green tops of the leeks, just above where the leaves split, then cut into 1/2 inch slices. Leave one tablespoon of the bacon fat in the pan and sauté the leeks 7–10 minutes, until soft.

Heat the oven to 325؛ F and let the leeks cool for at least 10 minutes.

In a large bowl, whisk the egg yolks until foamy, then mix in the cream and half & half. Cut up the bacon, and add it to the bowl, along with the leeks, Gorgonzola, tarragon, parsley, salt and pepper. Pour the mixture into eight 4 oz. ramekins, then place the ramekins in a baking pan. Add hot water to the pan, until it comes halfway up the ramekins. Cover the pan tightly with foil and bake 45–60 minutes, or until the center is just set.

Remove carefully from the hot water and cool at least 10 minutes before serving.