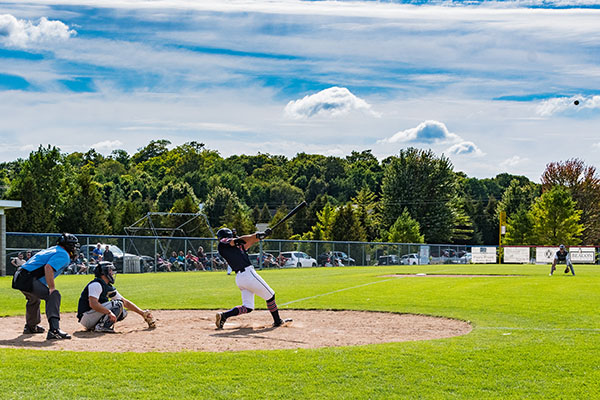 Tom Sawyer hits the winning home run in the bottom of the night inning with 2 outs to break the 1-1 tie and to put the Bays ahead 3-1. Sawyer also won the leagues best batter and most valuable player awards. Photo by Len Villano.

Tom Sawyer was this year’s Door County League (DCL) batting champion. He was also the league’s MVP. And in the final game of the DCL baseball season, he was the hero.

Sawyer went to the plate in the bottom of the ninth inning with a man on first, his Sister Bay Bays home crowd tense and pitcher Chase Lindem tiring after hurling eight no-hit innings before giving up the tying run in the top of the ninth. That’s when Sawyer flipped the script with one powerful swing, sending a Nick Brauer pitch into the grassy hill over the right-field fence and the Bays into a frenzy, giving the Sister Bay team a 3-1 victory over Maplewood and the DCL’s playoff championship.

Egg Harbor had already earned the more prestigious regular-season crown – its second straight – but the Bays were more than happy to revel in the glow of their consolation playoff crown.

Starting pitchers Brauer and Lindem both went the distance. Lindem struck out eight, walked two, and gave up just two hits. Sam Forkert tallied three hits for the Bays, and Sawyer and Bubba Laughlin both had two.

After the game, Drew Tanck of West Jacksonport was honored as Pitcher of the Year, and his skipper, Eric Bley, was named Manager of the Year.