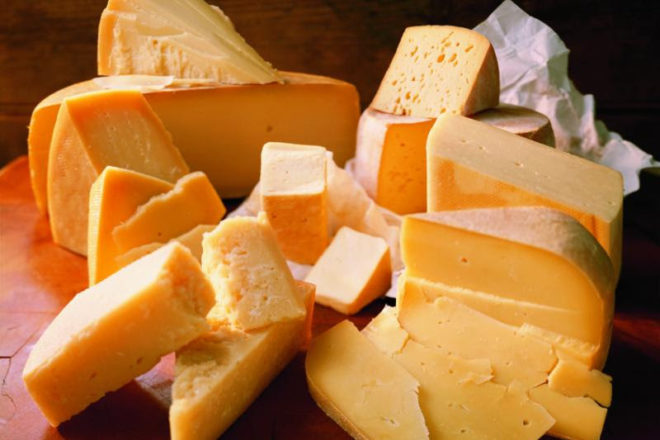 When people say “Door County,” cherries are likely the first agricultural product to come to mind. And for good reason. The county typically harvests between 8 million and 12 million pounds of cherries annually, and the Montmorency cherries grown on the peninsula account for 95% of all tart cherries produced in the state.

But Door County also has a rich history in cheesemaking, making June – National Dairy Month, among other things – the ideal time to explore the county’s “cheesiest” stops.

As Door County’s original cheesemaker, Renard’s Cheese opened its doors in 1961. Today, its store locations at 248 Cty S in Algoma and 2189 Cty DK in Sturgeon Bay feature a wide variety of artisan cheeses – there are 44 varieties of cheddar alone – in addition to its popular cheese curds and whips.

Second in line, the 2-year aged cheddar is sure to enhance any cheese board.

“It is our new release and has really taken off,” Renard said.

Developed during the pandemic – thus the name – it’s an Old World cheddar with a flavor profile similar to a cheddar Gruyère that Renard described as “rich, bold and aged.”

A drive past Door Artisan Cheese, 8103 Hwy 42 in Egg Harbor, would never hint that beneath the storefront is an underground cheese-production facility. On the main level, the retail store offers guests a cheese-tasting experience that involves educating them before they buy.

“We start by asking people questions about what they like,” said Richard Stulginskis, Door Artisan Cheese’s managing partner.

From there, visitors try samples tailored to their palate. And for the full cheese-tasting experience, Door Artisan Cheese can also provide guidance on which wine from its wine collection pairs best with those cheeses.

But, Stulginskis said, some cheeses are just worth trying, no matter what.

“Because it’s been aged for four years, it has an incredible flavor that people gravitate toward,” Stulginskis said.

The result is a cheese with just the right amount of bite and sharpness, but nothing that overwhelms the senses.

“Everyone has their favorite, but I would say this cheese is a little more interesting than most,” Stulginskis said of the Gouda-style cheese that’s washed in a chocolate beer stout.

“It’s washed six times, so it takes on some of the beer flavor, but not too much,” he said.

The “not your typical cheese” is Stulginskis’ pick to take any cheese board or charcuterie board to the next level, especially when coupled with a stout beer of a similar flavor profile.

A summer picnic or charcuterie board is not complete without the addition of a creamy, spreadable cheese for crackers and crusty bread.

Enter Door County Creamery’s goat-milk chèvre. Not only does it provide a delicious change of pace from spreadable cheeses made from cow’s milk, but the creamery also features an exciting assortment of specialty flavors, from earthy favorites such as truffle chèvre or fresh herb chèvre, to the Door County-inspired smoked-whitefish chèvre or lingonberry chèvre. You’ll be hard pressed to choose just one.

When it comes to hard cheeses, the stories behind each of the varieties are as inviting as the flavors themselves. The coveted seasonal Falltum cheese, for instance, is round in shape and made with rich, unpasteurized, late-fall milk. It’s aged all winter long, forming a dried, natural rind.