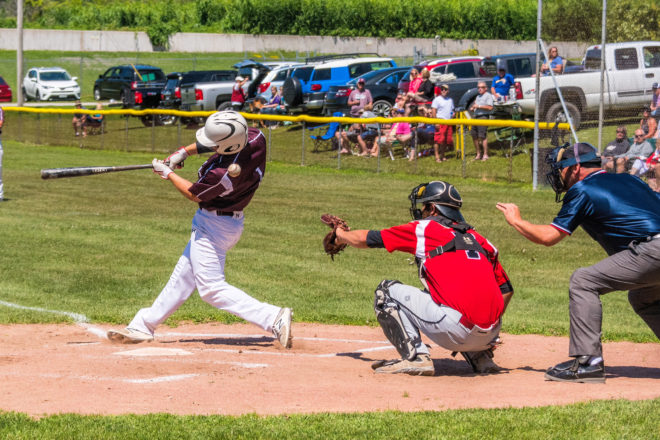 For only the second time in the past 78 years, fans and players won’t have a chance to enjoy Door County League (DCL) baseball games this summer. And each time, it took an unprecedented world event to cause it.

Because of the ongoing COVID-19 pandemic, organizers have canceled the 2020 Door County League baseball season, citing player and fan safety.

“I talked to all of the managers, and nobody wants to infect anybody else,” league commissioner Rick Gigot said. “While the managers didn’t exactly say cancel it, they agreed with the decision.”

The last time play was interrupted was during 1942, because of the escalation of World War II. Prior to 1942 and until this season, only one other unavoidable issue – a war – got in the way of local residents enjoying their summer baseball.

“The only thing I remember is when the weather called things off,” said Eddy Allen, WDOR Radio baseball announcer. “Those games were only postponed until another day. We would only lose a game here or there due to the weather.”

Initially Gigot and the managers agreed to postpone the first three games in May and move them to the last three weeks of August. May 31 was the rescheduled opening day, but this move created a problem filling rosters later in the summer.

Many teams have college players on their rosters, and fall school terms would be starting at about the time the regular season was winding down. Additionally, shelter-in-place orders in areas outside Door County limited roster sizes.

“One of the teams has five guys who work in Green Bay,” Gigot said. Door County has experienced community spread of COVID-19, which means there are cases in the area for which the source of the infection is unknown. The cases are not concentrated in one particular locale and are spread throughout the county.

“When Rick and I spoke, one of the discussion points was that large gatherings of people are high risk for spreading COVID and are not advisable,” said Sue Powers, Door County Department of Health and Human Services health officer. “In fact, the Centers for Disease Control recommends canceling gatherings of even 10 people if the individuals are at high risk for COVID.”

Avid baseball fans and players in Door County will temporarily lose an important competitive and social ritual that has blessed many summers. It isn’t unusual to have 200 or more fans attend a game on a sunny Sunday afternoon, or to have players in their 30s and 40s still enjoying their sports passion.

For the Sister Bay Bays and Baileys Harbor A’s, it’s a chance to renew a matchup simply called “Grudge.” For others, it’s an opportunity to cheer on brothers, sons, uncles and grandsons. For Washington Island residents, it’s a chance to prove their reputation of having the most passionate fans.

“You have the loyal backers of a team, and they show up rain or shine,” longtime baseball supporter Niles Weborg said. “Each team has its group of fans behind them.”

Allen – who began calling DCL games for WDOR in 1968 – agreed. He said he especially enjoys calling games on Washington Island and joining the locals at a local watering hole for a beer.

“That is a good social aspect, too, as long as I got back to the ferry dock in time to get the last boat home,” Allen said. “People like to watch a ball game. They are watching their relatives play sometimes, and sometimes their neighbors.”

For now, this summer tradition is on hold until Mother’s Day 2021. Gigot said because the guidelines in the future are unknown, he can’t predict what next season will look like. He added that he’s committed to providing baseball to local residents in a safe manner.

“Every day, things change. I guess it’s just a wait-and-see,” Gigot said. “I just want people to take it seriously and be safe.”