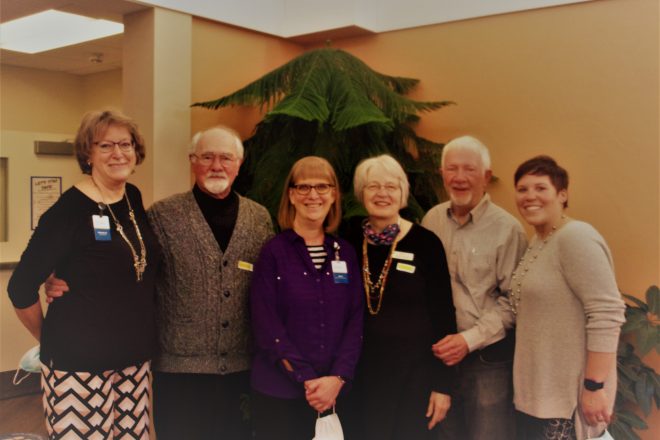 Door County residents younger than 50 probably can’t remember a time when SCAND wasn’t a fixture in Sister Bay, much less what the acronym represents.

But on Oct. 19, 1974 – nearly a half century ago – the first formal meeting was held at the Ephraim Shores Restaurant to establish what would become the Senior Citizens Agency of Northern Door. The Rev. Bill Shepherd was elected temporary chair, and state Rep. Larry Swoboda – who was to become very influential at the state level in helping to create the facility – was also present.

A year later, SCAND was formed to identify, provide and coordinate needed services and facilities for seniors, and in 1976, the committee voted to purchase from Ruben Hedeen a 9.5-acre tract on Highway 57 to build a nursing home and independent-living apartments. In 1978, the facility-to-be was officially named Scandia Village, and Paul Guenzel offered to contribute $1 for every $4 raised during the building campaign.

In 1979, a management contract with the Good Samaritan Society was approved. Construction of the original 60-bed nursing home cost $1,476,892. The mortgage for the Hedeen property was paid in January 1980, and a few months later, the Farmers Home Administration granted a $1.4 million loan. John Harding became site supervisor, and a construction contract was signed with Carlson-Erickson.

By November 1980, with the fund drive just beginning for a building that would not open for nearly a year, 24 requests for admission and 26 requests for employment had been received. By the time it was dedicated on Oct, 11, 1981, 46 more requests for admission had arrived. The first three residents actually settled in on Nov. 2, 1981. At that time, the daily rate for skilled nursing care in a semi-private room was $42.

On Nov. 2, 2021, Good Samaritan–Scandia Village began a three-day celebration of the 40th anniversary of its campus, which has grown to include condos, apartments, a care center with short-term rehab, and a memory-care unit.

In 1983, Scandia had 52 residents and 50 employees. Today those figures are 135 and 81. Nearly 100 volunteers at Scandia and Bargains Unlimited – the affiliated resale store – provide assistance in many areas.

“We appreciate our early founders for all their efforts to make SCAND a dream come true for our community,” said Michele Notz, Scandia Village administrator. “And thanks to the community for their ongoing support of capital campaigns and fundraisers over the years.”

Notz was hired as a housekeeper in 1982, long before federal and state nurses’ aide requirements were adopted.

“When they needed a certified nurse assistant, I was given a half day’s training on how to make a bed and safely move a patient, and promoted to that position,” she said with a laugh – definitely not the way things are done today.

When The Meadows was built in 1986, Notz became its manager, then business-office manager, and in 2010, she stepped into the role of Scandia Village administrator.

COVID-19 prevented Scandia Village from repeating a celebration like its 25th anniversary, when 400 people attended an open house and cookout. But Marlee Sutrick, community and volunteer coordinator, created a program that was repeated on three consecutive days in the Care Center, The Meadows and Woodview.

“It’s not the big celebration we were hoping for,” Sutrick said, “but we made the best of it.”

The program each day included a welcome and invocation by Chaplain Joy Zakrzewski. Terry Goode said he’s enjoyed volunteering as a computer assistant and on capital campaigns, golf outings and the advisory board. Dave Boock told of being a member of the board of directors during the transition to becoming a Good Samaritan facility. He later became a Good Samaritan Society employee and came back as administrator of the Sister Bay campus for 17 years. He and his wife, Cheri, are now residents of The Villas. Cheri Boock, an auxiliary member and Bargains Unlimited volunteer, spoke about the contributions of time and money those organizations have made to Scandia’s success.

As the residents enjoyed pastries, some of them also shared comments. Margaret Loving, a resident for 24 years, spoke of how it really feels like home. David Seaquist recalled playing on open land where Scandia now stands during his childhood visits to his grandparents’ nearby farm. And Lois Rice said she was very impressed with the willingness of residents to give back to the community during the pandemic.

The week ended with a celebration with staff.

“Without them,” Notz said, “we would not be here. It takes all kinds of trades to make this place run. We are truly grateful for them and all they do.”

Scandia Village opened its first Bargains Unlimited shop in 1990 in a space in Ellison Bay donated by Regina Daubner. The resale store moved to a 2,400-square-foot building on the Scandia Campus in 1995 and added to that space in 2010. In 1990, volunteers from the Scandia Auxiliary were thrilled to earn more than $8,000. By 2019, the auxiliary had given a total of $5,167,660.50 to Scandia Village.

Much has changed during the past 40 years, but the vision remains the same: improving the human condition in later life through exceptional care, spiritual enrichment, innovation and discovery.