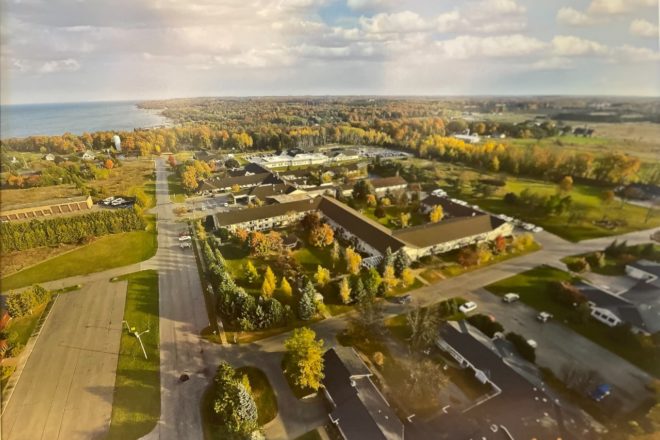 An aerial view of the Scandia Village campus in 2021.

Scandia Village–Good Samaritan, the assisted-living facility and senior-living campus in Sister Bay that is home to about 13% of the village’s population, is going up for sale.

Nate Schema, president and CEO of Good Samaritan Society – which is owned by the South Dakota–based Sanford Health – confirmed the news in an email Friday. Schema said the organization is consolidating its services and investments into its core region, with the 30% of its centers outside that region being sold, including Scandia Village.

“The transition will happen gradually because we are committed to finding a senior-care and services provider that will continue our mission in Sister Bay, Wisconsin, and be well equipped to serve our residents, clients and caregivers into the future,” Schema said.

A report from Long-Term Care News said Good Samaritan’s consolidation will begin with the sale of 10 facilities in Idaho, Montana, Oregon and Washington to Cascadia Healthcare.

The news comes after months of speculation both inside and outside the building about the future of Scandia Village. The center has lost several longtime staff members to retirement and other area health care providers, taking decades of experience and facility knowledge with them. That includes administrator Michelle Notz, who retired in June, and professionals in several other top leadership positions, including the social worker, infectious-disease expert and chaplain.

Scandia Village – once northern Door County’s largest employer with more than 100 employees – now has about 60.

The sale could be seen as good news to those who have been concerned about the facility’s future. A self-appointed task force of citizens and volunteers has been meeting regularly since September to strategize how to support and attract staff at Scandia Village and improve community relations.

“A collective group has come together and realized that Scand needs community input and communication with corporate so they [at corporate] realize we are very serious about the importance of this place to the community,” said Bob Lindahl, a member of the task force. “Scandia Village has been around for 40 years with a tremendous amount of community care and support.”

That means that residents of Northern Door, including some seniors who live in the Meadows independent-living apartments, are moving into care centers in Green Bay and Kewaunee County because Scandia Village can’t take them.

The empty beds sparked questions, including rumors that the center could potentially close. Clint Graybill, Good Samaritan Society’s executive director, said in an email that “we do not have plans to close the location.”

Graybill acknowledged the staffing issues but attributed them to the wider workforce crisis affecting the health care sector.

“Staffing challenges remain a very real concern, and it has impacted our ability to admit to full capacity in some Good Samaritan Society locations,” he said.

More concerns came in November, when three health complaints were filed by residents, followed by a fourth in December. The center must clear those complaints with the Wisconsin Department of Health Services to continue to be eligible for Medicaid reimbursement.

Scandia Village opened in 1981 after years of planning by a group of local citizens who formed the Senior Citizens Agency of Northern Door, or SCAND. Evangelical Lutheran Good Samaritan Society of Sioux Falls, South Dakota, managed the daily operations and took ownership in 1993. Sanford Health took over Good Samaritan in 2019.

Scandia Village has long prided itself on its staff retention and low turnover rate – a large selling point of its 2012 Partners in Compassion capital campaign.

The staffing shortage that’s now affecting Scandia isn’t just about wages, according to current and former employees – it’s also about a changing culture.

Roberta Thelen – who retired in December after 21 years at Scandia Village, where she was most recently the care coordinator – said that more than half of the staff is now composed of traveling agency personnel who work on short-term contracts. Some of them are housed in vacant units at Scandia Village.

“For a long time, I felt proud to work at Scand,” Thelen said. “It has always had a good reputation. But recently, employees have felt they could find a better situation somewhere else. They didn’t feel they had support anymore. Nobody was coming to rescue them.”

“For years, we’ve had people willing to drive from Sturgeon Bay and south just to work at Scand because the culture was wonderful,” said Kathy Wagner, a former director of nursing at Scandia Village and now a member of the task force.

Since Sanford took over Good Samaritan in 2019, it has discontinued many of the center’s community-outreach programs. The local advisory board was disbanded and the annual golf-outing fundraiser discontinued, according to those on the task force.

That’s difficult for many longtime volunteers to stomach, in part because the center has always been so well supported by local volunteers and fundraising.

The Bargains Unlimited resale store has contributed more than $5.3 million to Scandia Village since the store opened in 1990, and in 2016, Scandia Village completed its $8 million capital campaign to remodel spaces, create private rooms, expand rehabilitative services and add to the assisted-living complex.

“Scandia Village is a factor in people retiring to Northern Door,” Lindahl said. “They take comfort knowing it will be there for them. It’s crucial to the area.”