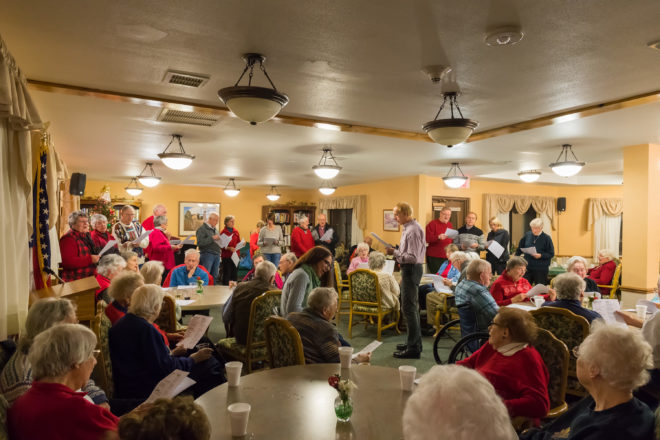 Dave Callsen stands at the center of the room during the annual carol sing-along at Scandia Village, held this year on Dec. 19. Photo by Len Villano.

It was a week before Christmas and the halls at Scandia Village were brimming with smiling faces and good cheer as Nicki Scharrig, director of Resource Development and Marketing and Volunteer Coordinator, gave a tour of the facility along with two dedicated volunteers and capital campaign committee members Terry Goode and Dave Callsen.

While it was the holiday spirit infusing the Scandia hallways, the generosity of the Door County community is always felt here, in both monetary donations and volunteerism, Scharrig said, proven by the fact they are $385,000 away from the $8 million Partners in Compassion capital campaign that saw a three-phase building project. 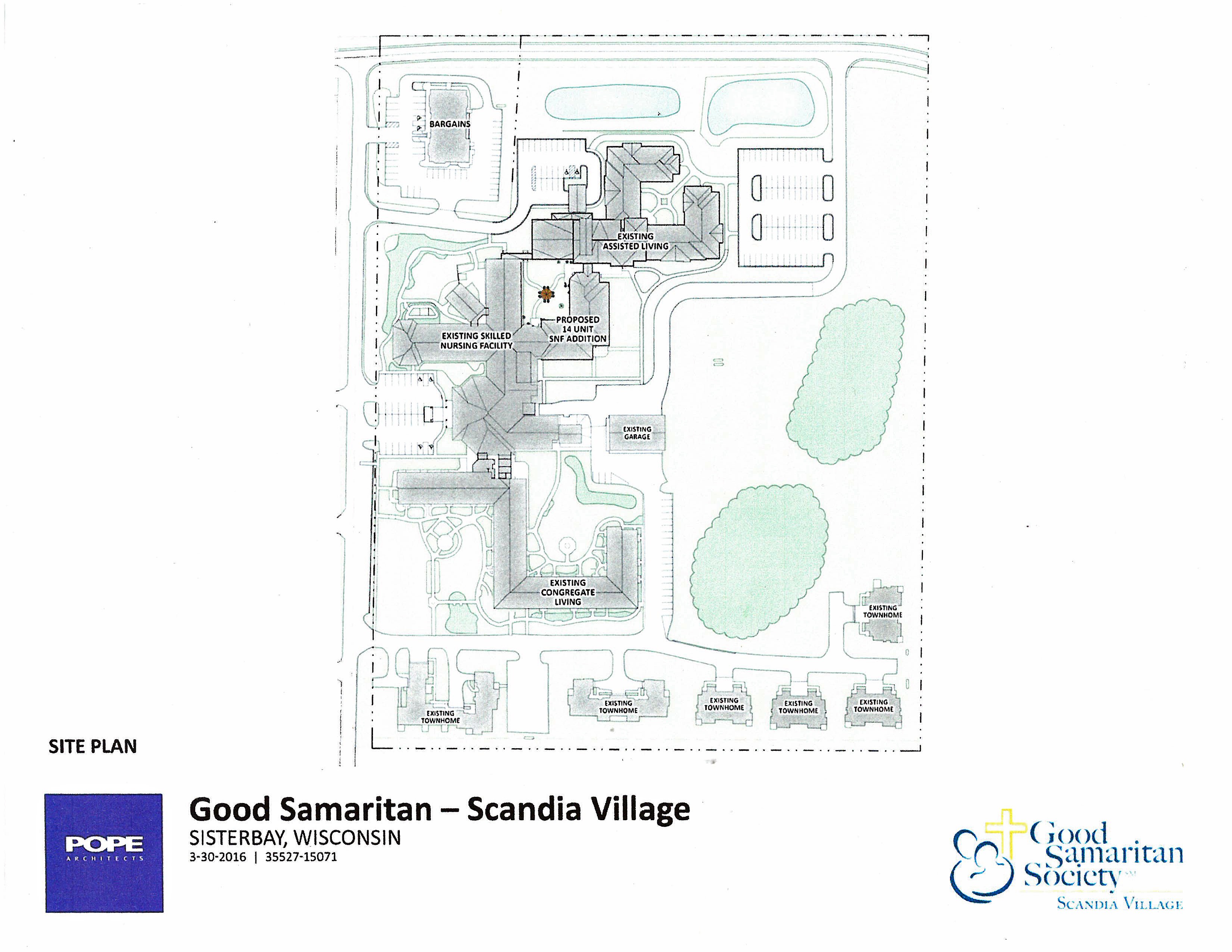 Architectural rendering of phase 3 of the capital campaign project.

Scharrig points out that the dedication to Scandia Village comes in many forms, and each is essential to its continued success. For example, she points to the 110 staff members.

“We’re on a little island and 80 to 90 percent of our staff drive from Sturgeon Bay every day,” she said. “Some come from Southern Door and some even are closer to Green Bay. We had one lady who drove all the way from Dyckesville here and back every day for 17 years. We do what we have to do. Our wages are higher here and we have a good benefits package. We have the support of our national campus, which is good, and we have the support of this great community.”

“The low turnover says a lot about how the place is run and how people feel about working here,” Callsen added.

“The residents are like our grandpas and grandmas,” Scharrig said.

“Your grandpa and grandma are here,” Goode said to Scharrig.

Both Callsen and Goode got involved with Scandia Village after having relatives there.

“Both my in-laws and parents were here,” Goode said. “Some of the staff here now were here then when they came in 1996. With the four, we had 31 combined years of service from Scand, 16 consecutive years. You just walk around here and you feel like family.”

“My wife’s parents both were here,” Callsen said, adding that his mother in-law first came for rehabilitation after surgery.

“She loved it here,” he said. “It was funny because her husband, my father in-law, would come here every day and he’d have her suitcase with him. He wanted to get her home, and she was in no big hurry to leave. She was enjoying the cards and being able to visit with a lot of people. But he finally got her home.” 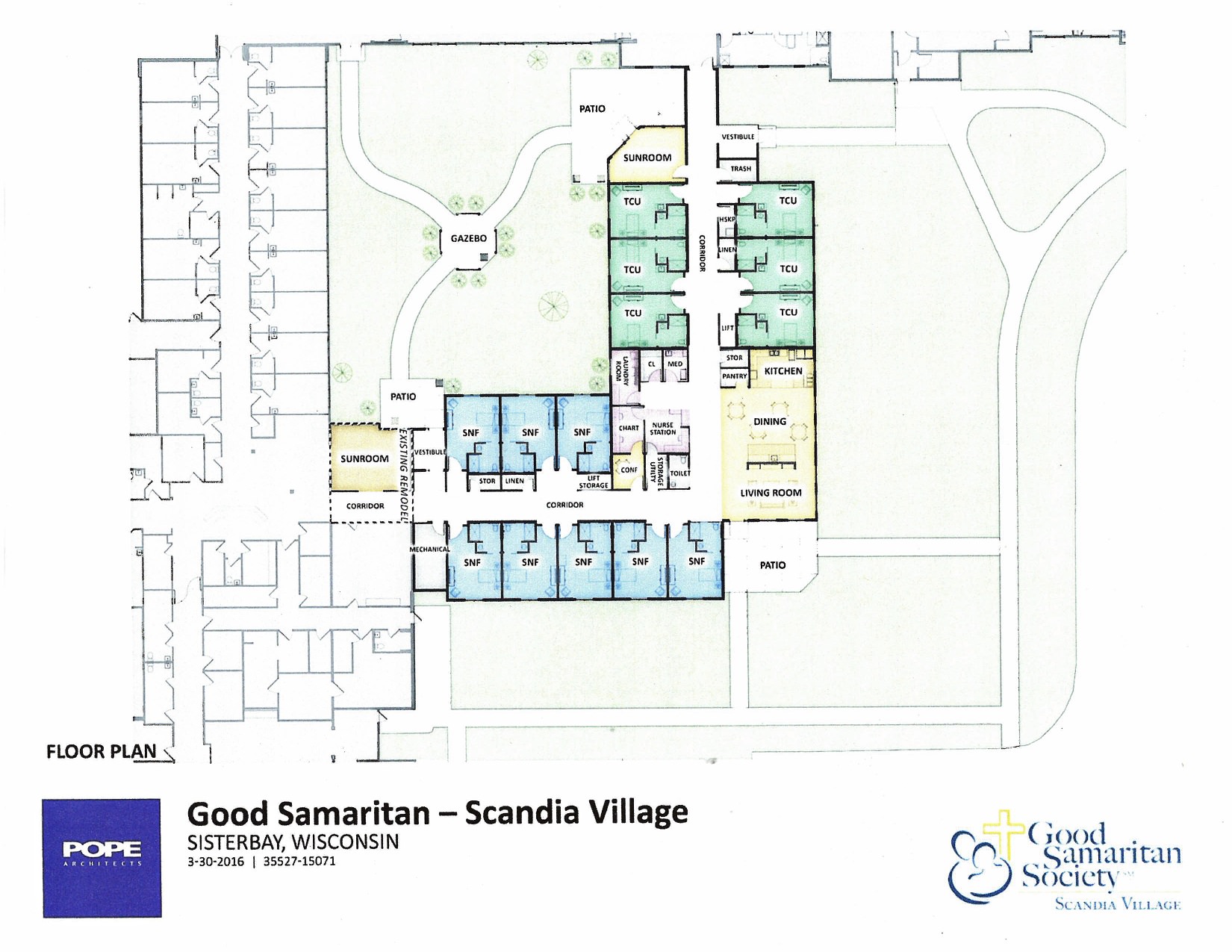 Architectural rendering of phase 3 of the capital campaign project.

In addition to serving on the capital campaign committee, both men volunteer in other ways. Goode and his wife Pam are there every Wednesday for art projects with the residents. Callsen organizes a popular annual Christmas carol sing-along.

“Without volunteerism, starting with these two and about 400 others, we wouldn’t be in existence,” Scharrig said, “and I think that’s somewhat unique. I know other nonprofits have volunteers, but I think we have the best. Between Bargains Unlimited [the thrift store on the Scandia campus] and the Scand Auxiliary there was $2 million committed to this project, and that’s all from goods nobody technically wants. They do an amazing job.”