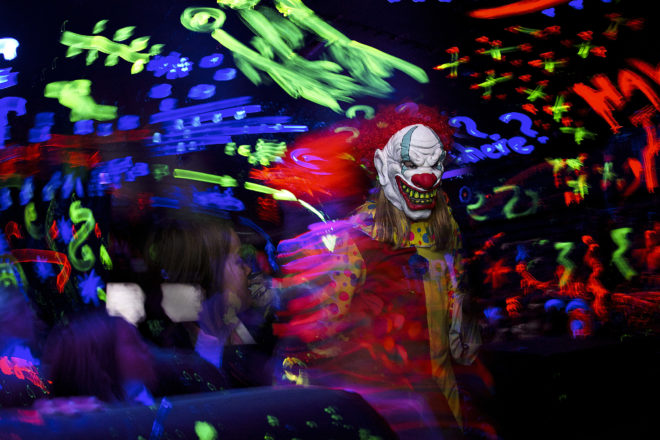 Most of us have heard of Christmas in July, but for the organizers of the Southern Door Haunted Mansion, it’s all about Halloween in March.

That’s when a group of dedicated volunteers starts the process of getting its spook on by planning for the Southern Door Haunted Mansion, which has the distinction of being voted the favorite northeast-Wisconsin haunted attraction by visitors of hauntedwisconsin.com eight years in a row.

Now in its 13th year, the event held at Quietwoods South Camping Resort in Brussels is a highly successful fundraising event for the Southern Door County School District. More than $250,000 has been generated for student activities, academics, arts and athletics.

“We talked about how wonderful it would it be if we had an event in our area where we could build off the acting and artistic talent of our students,” Vandertie recalled. He had recently attended a haunted house, so he and Marchant discussed the possibilities of holding one in their area.

Things progressed quickly from there. Marchant’s son, Mike, who owns Quietwoods, offered the use of his property for the event, and from humble beginnings, the haunted mansion grew and thrived.

Today organizers of the event come up with new diabolical ways of instilling terror each year. In early March, they gather for a brainstorming session. “That’s when we get an idea of what we want to buy and what we want to do,” Marchant said.

Every other year, at the end of March, a team goes to the Haunted House Convention in St. Louis, where a gathering of the purveyors of the scariest paraphernalia in the Midwest pack a huge hall with the latest supplies designed to terrify. “It’s incredible,” Vandertie said of the convention. “It’s international. People come from everywhere, and there are workshops and trainings that we can participate in that help us expand our ideas.”

An April meeting of the haunted house organizing committee starts with a show-and-tell of the items purchased at the convention and continues with more brainstorming about macabre ideas and plans. “You have to have a warped mind,” Marchant said with a laugh.

In July, after initial designs come together, volunteer Jim Englebert and Vandertie start laying out the plans that will transform an almost-6,000-square-foot pole shed on the camping resort grounds into a labyrinth of terrifying rooms and hallways. A crew of volunteers, carpenters, electricians and artists helps with the transformation. Last year this crew created 32 distinct fear-inducing areas.

Transforming a pole barn into a mansion of terror is a big enough undertaking, but the Southern Door Haunted Mansion event also features several other attractions, including a corn maze that takes weeks to create.

That’s because there isn’t a corn field at the site. Instead, the Southern Door Wrestling Club hauls in fence posts, puts up snow fencing, cuts corn stalks and then weaves them among the fence posts.

There’s also a trail through a wooded area that offers startling features around many turns, plus a ride in old school buses to transport Halloween revelers from one area to another that puts a new spin on scary drivers.

“It’s a coffin you crawl into, and while you’re in there, it moves … It makes it feel like you’re going down the road in a hearse, and … there are different noises, and there’s a camera on you so everybody else can see what your reaction is inside the coffin. People get really scared,” Englebert said.

Marchant and Englebert said it very quickly becomes obvious which scare tactics work — and which don’t. “If it doesn’t work the first night, we try to change it up,” Englebert said.

Ghosts and clowns — known for being scary — are a staple in the haunted mansion. Englebert said they’ve discovered that “quick, sudden scares work better than a long one. Scare ’em once, and move on.”

Because all of the actors and participants — on some nights as many as 120 — are volunteers, each night may feature different actors, although Englebert said they try to keep the same actors in their horrifying roles.

“If it works really well, we try to get them back as many times as we can. Or, if they can’t make it, we take what they did, and hopefully the next person does it and makes it work,” he said.

It doesn’t take special training to be an actor at the haunted mansion, but Marchant said they’ve found that kids who are involved in theater at school have more of a performance bent. They also get some theatrically minded local adults to fill roles.

Make-up artists work diligently to bring the actors to life — or, in many cases, death. “We’ve had the same make-up artists for quite a few years now,” Englebert added.

Tasked with transforming students, moms, dads and community members into ghosts, ghouls, zombies and other scary creatures are Barb Schriner-Schmitt, Rob Soukup, Natasha Johnson-Phillips and Sue Massart. “Each artist specializes in different ways to get the look we want,” Massart said.

The make-up artists use water-based professional make-up as well as Cinema Secrets professional “blood” for that much-desired, juicy and realistic bloody look. Setting powder helps to keep the make-up in place longer.

Massart said that using an air brush to apply the make-up allows the make-up artists to get the actors’ scary looks done in a remarkably short time. “Generally we can do about 100 actors’ make-up in a little over an hour,” she said. “And some actors do their own make-up, adding their own flair to the part.”

Last year, almost 6,000 people got scared out of their wits during the eight days of the event, which is held every Friday and Saturday in October. Nearly 600 volunteers put in more than 8,150 hours of work to turn the event into the horrifying extravaganza that area residents and visitors alike have come to expect and most definitely enjoy.

In fact, according to Marchant, Quietwoods used to close in mid-October, but since it has become the site of the haunted mansion, the camping resort not only stays open through October, but it has also seen reservations for the four weekends in October fill up first. “It really benefits the community,” Englebert said.

Obviously, the Southern Door Haunted Mansion takes a “frightening” amount of work, but the volunteers agree it’s not all work. “It’s truly a community-wide event that brings people together to share their talents, whether it’s around construction, art design, acting, costuming or make-up. There’s something really special about a project that brings community together to support youth,” Vandertie said.

For more information about dates, times and costs, visit hauntedmansionsoutherndoor.com.