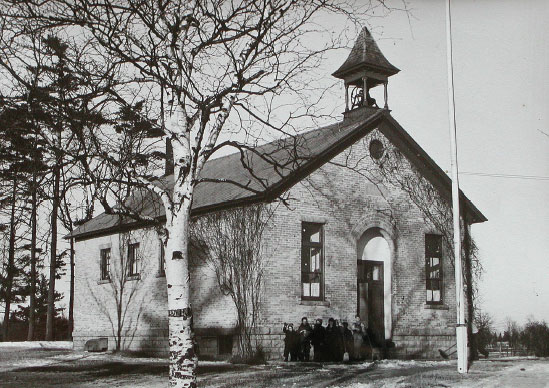 The old Door County one-room and two-room schoolhouses of the late 1800s and 1900s have all but retired from their education-related functions. Many have fallen into disrepair or are altogether gone, but the surviving buildings have been converted to homes and businesses.

One of the early schools can still be seen today in its original form at Crossroads at Big Creek’s historical village. The Vignes Schoolhouse (1890) was moved a couple of times in Clay Banks before coming to rest at Crossroads. Sonja Polster wrote a letter to the Door County Advocate on January 15, 1993, calling upon support for the preservation of the structure, and said the schoolhouse was “a symbol of and a tribute to the hardworking, honest, simple rural people from the past and the present.” In the early days the school had a piano in the corner, pictures of George Washington and Abraham Lincoln on the walls, and rows of front-to-back connecting desks. Children from age 6 to 14 years old attended Vignes, and sat in progressively larger seats as they advanced in grade.

The schools represent a different, simpler time. It was a time when many grades were taught in one room. It was a time of greater patience and cooperation, remembered by how the older students would help the younger students when the teacher was focused on the younger grades. Karen Stuth Overbeck recalls how some of the teachers would travel between schools. “Mr. Andropolis would teach art at the various schools. There was also a music teacher who would go from school to school.” Traveling physical education teacher Robert Drake had to duck under the low beams in the basement of the 1921 vintage Fairland School when teaching second and third graders to bowl (Door County Advocate, March 24, 1970).

Buses are the main form of student transport these days, but in the era of one room schoolhouses students commuted to school by walking the roads, cutting through fields, riding horses or buggies or bicycles, and sometimes automobiles and even tractors. The schools were numerous because they were generally located so that students could easily get to class by walking. Overbeck recalled one of her interesting commutes to Silverdale School. “The snow drifts were so big that my mother drove us to school on a tractor. There were four of us — my brothers and sisters, and mom on the tractor.”

Some students would walk to school during winter with baked potatoes in their mittens to keep their hands warm. The potatoes became lunch, according to a story heard by Jacksonport resident Kari Anderson.

Brick or wooden one-room schools were built through the 1920s, and each had its own character and signature. Tornado School (1910) in the town of Brussels was a two-story structure with a spacious upstairs kindergarten. Teachers would say that the play area in the basement was just too cold to use when the north wind blew. The 1915 vintage Gardner School was noted to have scorched marks in the basement. Jim Robertson described an old steam furnace next to fuel tanks surrounded by dry rafters and bare laths (Door County Advocate, March 17, 1970). He rightfully expressed concerns about fire. The 1906 vintage Lincoln School in Nasewaupee was remembered for the toilets being located at the end of the basement. Students had to walk down a narrow stairs past the furnace room that doubled as a recreation area for 59 Southern Door kindergarten students.

The one room schoolhouse era was already over by the time the county held a public auction on August 25 and 26, 1973. At that time ten Southern Door outlying schools were sold. Since then many schools have been purchased and converted to homes and businesses. Kari Anderson lives in the old District 4 Groveland School on County A. The school was used until 1962. “Paul and I bought it in 1982,” Anderson said, “and we lived in sawdust and construction with a baby for many years. It’s all white pine post and beam from the Upper Peninsula [Michigan]. It’s real old world construction. There are boards in the attic with 1890 dates on them, and the carpenters Tischler and Anschutz signed them, too.”

Margaret Lockwood has located her Woodwalk Art Gallery in the Juddville School on Highway 42. The school was open until 1958, after which time it was used by St. Paul’s Lutheran Church until being purchased by Lockwood in 1995. Lockwood has kept much of the interior in its original condition, although the church had added a kitchen. “The bell is still in the tower,” Lockwood said, “and you could ring it until just a couple of years ago when the rope broke.” The school has a row of big south-facing windows and once had a slate chalkboard on the north wall.

The oldest of the one-room schoolhouses bespeaks of an earlier era, when Door County was still growing through its pioneer days. The schools offered students only the bare essentials compared to modern schools, but the buildings also doubled as social centers, sometimes used as town halls, for voting, and many other activities. Today the schoolhouses continue to find purpose in their new roles – and although other evidence of that earlier era is eroding, these buildings help preserve an important sense of heritage.