Former Milwaukee Brewers catcher and current Brewers broadcaster Bill Schroeder will be enshrined on the “Brewers Wall of Honor” at Miller Park this year.

The “Wall of Honor,” which was unveiled in 2014, commemorates Milwaukee Brewers players and broadcasters that meet a set criteria based on service to the Club. The “Wall of Honor” is a permanent display outside of Miller Park on the North side of the stadium. Honorees on the wall each have a plaque with their photo and a brief synopsis of their career.

A pre-game ceremony to honor Schroeder will be held on Friday, July 17, when the Brewers face the Pirates at Miller Park.

“I’d like to thank the Brewers organization for recognizing me for the work I have done on and off the field,” Schroeder said. “It has truly been a labor of love. I have experienced many great moments with the team over the years and being added to the Wall of Honor tops the list.” 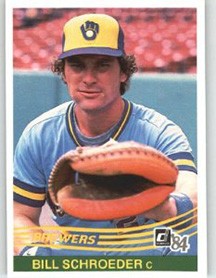 Schroeder will return for his 21st season in the Brewers broadcast booth this year. He began his career behind the mic as the Brewers’ color man after a distinguished playing career.

Schroeder spent eight seasons in the big leagues with the Brewers and California Angels, posting a career-best .332 batting average in 1987. He caught Juan Nieves’ no-hitter on April 15, 1987, at Baltimore in the midst of the team’s Major League record-tying 13-0 start. In addition, he clubbed a career-high 14 home runs and had 42 RBI that season.

“Bill Schroeder is such an important and integral part of Brewers baseball, both past and present, and we’re thrilled to be able to honor him in this way,” said Brewers Chief Operating Officer Rick Schlesinger. “As a former player and longtime broadcaster, Bill’s loyalty and commitment to the Brewers run very deep, and his place on the Wall of Honor is much deserved.”

Members who meet any of the following criteria while wearing a Brewers uniform will be inducted into the Wall of Honor:

• 250 appearances as a pitcher

• Winner of a major award (MVP, Cy Young, Rookie of the Year, or Fireman of the Year)

• Individuals memorialized as a statue on the Miller Park plaza

In addition, the above criteria has been updated to allow the team to honor longtime broadcasters who played for the team. Any alum who donned a Brewers uniform for any length of time and served as a primary broadcaster for at least 20 seasons with the team will be eligible for the “Wall of Honor.”

Further details regarding the ceremony will be announced at a later date.