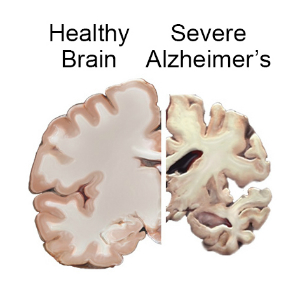 The damage from Alzheimer’s disease initially appears to take place in the hippocampus, the part of the brain essential in forming memories. As more neurons die, additional parts of the brain are affected, and they begin to shrink. By the final stage of Alzheimer’s, damage is widespread, and brain tissue has shrunk significantly. Image courtesy of National Institute on Aging.

Alzheimer’s disease has increased 89 percent since the year 2000; 110,000 people die of the disease each year. Through the years millions of dollars have been spent on Alzheimer’s research. Efforts to pinpoint the cause and develop efficient treatment modalities of this disease have not led to any breakthroughs. Dr. Leslie Norins has followed this research for years, and came to believe that the disease represents an infectious process and theorized that most Alzheimer’s disease is caused by one germ; perhaps a microbe like a bacterium, virus, fungus or parasite, and he is offering $1 million to anyone who can prove this. This notion is a good example of “thinking outside the box.” This germ may be an infectious or even a contagious agent, for neurosurgeons develop the disease 2.5 times as often as the general population, and people who have a spouse with Alzheimer’s have 1.6 times greater risk for the condition. If Dr. Norin’s right, new therapies may emerge that, at last, will make the disease treatable. (Brain in the News, Oct. 2018, dana.org)