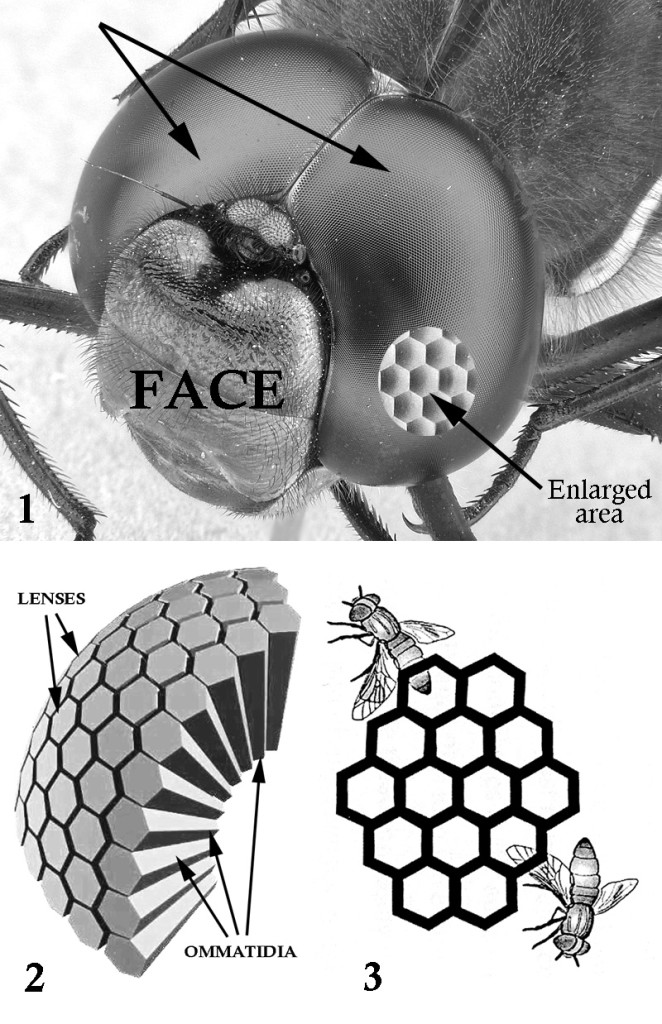 The dragonfly’s head is mostly eyes, as it has been for more than 300 million years. These eyes are essential to their survival because they are carnivores (meat eaters) and they must catch and eat smaller flying insects such as mosquitoes, flies, and even smaller dragonflies. Their oversize eyes, which have a visual range of almost 360 degrees, are actually made up of up to 30,000 individual eyes that are tiny cylinders packed side-by-side in a convex fashion (Figs. 1 & 2). This kind of eye is called a “compound eye,” and all insects have such eyes. So what do dragonflies really “see?” Each individual eye has a hexagonal lens on its upper surface (inset in Fig. 1), and if you look down on such an eye with a microscope, these lenses appear in the form of a grid pattern (Fig. 3). Compound eyes do not provide a sharp image. Rather, nature designed them to detect movement. Because the hexagonal lenses collectively form a grid pattern (a “map” if you will), then when a prey moves from one part of a grid opening to the next, its movement is instantaneously perceived by the dragonfly. At that point the dragonfly’s brain locks onto the flying prey, calculates its trajectory, and ignores everything but its target. Eight pairs of visual neurons tell the four wings to adjust their angles and beat pattern to intercept the prey in flight. Ninety-five percent of the time the dragonfly is successful in grabbing its prey and shoving it into its mouth, where two opposing jaws crunch away until the prey is ready to swallow. This usually takes less than a second. (Burton, 2001, Wisconsin Entomological Society, vol.28, #1; Shuker, K.P.N., 2001, “The Hidden Powers of Animals,” Marshall’s Editions LTD, London; Gonzalez-Bellido et al, 2013, Proc. of the National Academy of Science, Jan. 8)