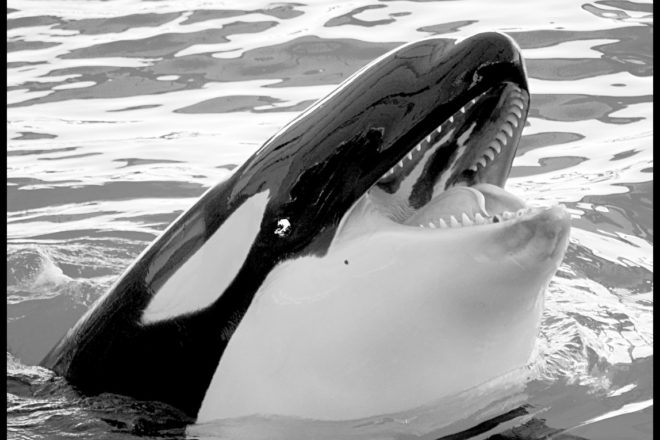 Killer Whales (Orcas) are the largest members of the dolphin family, so they are not whales at all. But regardless of what they are called they are formidable creatures that can grow up to 32 feet in length and weigh up to six tons. As apex predators of the ocean, with four-inch long teeth (see photo), they feed on pretty much whatever they want – seals, sea lions, birds, fish, and even small whales. They use echolocation to hunt prey. In captivity, they are known for being moody. Trainers work with them at their peril, and there are dozens of incidents where handlers have been mauled or killed by these animals, which are sometimes called “wolves of the sea.”

Humpback Whales, which only feed on microscopic krill, have an interesting relationship with Killer Whales. It has been confirmed that when Killer Whales mob a group of prey, such as a pack of seals, Humpbacks move in to harass and disrupt the feeding frenzy. Apparently the Humpbacks hear the calls of the Killer Whales and move into the fray. Some scientists say that “this may be a case of interspecies altruism,” for Humpbacks have an entirely different food source than Killer Whales and have nothing obvious to gain from the interaction. (Pitman et al, 2016, Marine Mammal Science, July 20 issue).