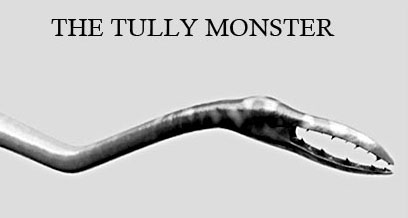 There was a monster living on Planet Earth 300 million years ago. Its fossilized remains were discovered in 1955 not far from Chicago by an amateur fossil hunter named Francis Tully. He took his fossil to a specialist at the Field Museum, who was baffled by what he saw. From its imprint in the rock, it appeared to be a fat, worm-like creature about seven inches long. It was so different from anything the fossil specialist had ever seen that he assigned the “thing” the scientific name Tullimonstrum gregarium. The Tullimonstrum part of the name honored its discoverer. As more of these fossils were found by rock hunters, the public referred to them simply as “Tully Monsters.” What made the Tully Monster so unusual was its odd plump body with fin-like structures at one end and a long flexible proboscis at the other end. The mouth was located at the end of the proboscis inside a structure resembling a crayfish pincer or an alligator clip lined with small teeth. Eyes were strangely positioned at the ends of a stiff bar extending out from the fatter part of the body, which had five openings along each side leading into the gills. A notochord was present, which is a characteristic feature of vertebrate animals. All the evidence to date suggests that Tullimonstrum is distantly related to lamprey eels, which are themselves a primitive kind of vertebrate. Seeing is believing, and the accompanying image is an artist’s rendering of what this monster looked like in life. Illinois congressmen certainly believed, for they designated the Tully Monster the official state fossil.