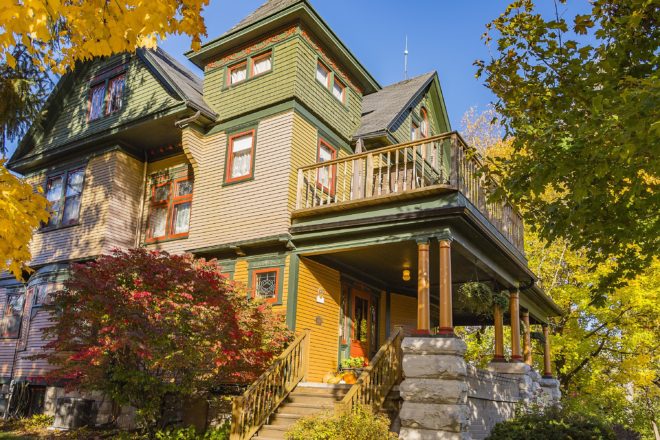 When the Scofield House was built in 1902, it was deemed the “grandest house in Sturgeon Bay.” Photo by Len Villano.

When Herbert “Bert” and Augusta Scofield built their 15-room Victorian home in 1902, it was described as “the grandest house in Sturgeon Bay,” befitting the scion of a prominent family. Bert had just completed two terms as mayor, following in the footsteps of his father, Charles, who was elected the town’s first mayor in 1883.

Bert was born in 1859, the oldest son of Charles and Maria Scofield. He attended Green Bay Business College and, in 1888, established the Scofield Hardware Company at 215 N. 3rd Ave. — in the building the Artists Guild now occupies. After partnering with his brother, Harry, the following year, Bert grew the store to become the second-largest hardware business in the state. Bert and Augusta were married in 1883 and had four sons.

In 1902, the Scofield mansion was situated on treeless acreage on the far edge of town, with a carriage house, outbuildings and a windmill visible in an early photo. Today the grounds of the Scofield House Bed & Breakfast at 908 Michigan St. are beautifully landscaped with plenty of trees, but if Bert, Augusta and their boys walked in the front door, they would feel that it was once again 1902 — but with the addition of air conditioning, whirlpool tubs, TVs, WiFi and six more bathrooms.

Bert hand-wrote the specifications for the house, calling for knot-free white oak throughout. The inlaid designs in the first-level floors of the nearly 5,000-square-foot home and the detailing of the carved woodwork could not be easily replicated today. And Augusta herself traveled to Europe to select the hardware for the doors.

Bert was an innovative planner. The third floor housed a huge cistern that collected rainwater from the gutters. The water was piped down to the kitchen, heated by the cook stove and piped back to the two original bathrooms. There was a darkroom with a red-glass window where Bert developed the photos he took of his family and their home — the reason why its early years are so well documented.

Around 1940, the Krauss family bought the house, and by the time Bill and Fran Cecil bought it in 1987, it was showing its age. But they saw its potential: It was worthy of a massive restoration to turn it into a spectacular bed-and-breakfast. Karl and Janet Bethke bought it in March 2018.

The entire third floor is now Room at the Top: a private suite enhanced by artifacts salvaged from the 1876 Door County Courthouse. The room’s fireplace has a 100-year-old cherry mantel, and oak-panel doors from Mrs. Scofield’s sewing-room cabinets hide a wet bar and refrigerator.

The five other guest bedrooms — Turret, Blue, Water Lily, Rose and Gazebo — all have beds and other furnishings from the 1850-to-1900 era, private baths and luxurious linens.

The Bethkes slept in every room before they opened the B&B to guests to ensure that all are as comfortable as they are attractive. The kitchen, remodeled in 2014, is perfect for cooking together when they serve full plated breakfasts with pastries, fruit, a hot dish and sides from 8:30 to 9 am.

“But guests are always so interested in chatting that they seldom leave the table before 10,” Karl said. The Bethkes’ home-made soft pretzels and cookies, other treats, fruit, coffee, tea and water are always available on a sideboard. Karl and Janet also enjoy sharing their lives and learning about their visitors.

The elegant main-floor rooms look almost identical to the rooms captured in early-1900s photos. Every window in the house has lace curtains, and fresh flowers abound.

The Bethkes are musical, so their music room hosts two dulcimers, a violin harp, harpsichord, trombone, flute, two recorders and one of the house’s two grand pianos. Hoping to determine its provenance, they were excited to find a receipt from a man who tuned it in ’05. (No luck finding him, though: The date was 1905, not 2005!) The music room doubles as a second dining room when the B&B is filled to its capacity of 12 guests.

At least one of the Bethkes is present whenever the inn is open.

“We feel so blessed to be here,” Janet said, “and we have met so many wonderful people. A really nice aspect of the house is that guests enjoy sitting and talking to one another and with us. They say they appreciate the fact that we spend so much time with them.”

Scofield House is open year-round, and Janet and Karl have found that it meets a special need for younger families visiting parents who have downsized to a smaller residence in Door County. “The youngsters stay with grandma and grandpa,” Janet said, “and the young couple gets to sleep late and be pampered here. Everyone is delighted.”